On the morning of September 21, 2013, I woke up to the sound the falling rain. When I stepped out of my room, this was the sight that greeted me. It is here that I will request you to backtrack a bit and read my previous post, if you haven’t read it already.

I was at Sangla’s Kinner Camps in the Kinnaur region of Himachal Pradesh. Our tour group had arrived here the previous afternoon and we had had a great time exploring the neighbouring Batseri village and walking along the River Baspa till rain forced us to return. Though we were a little concerned about the sudden change in weather, we were also quite sure that the next day would dawn bright and sunny.

Bright? Sunny? It was dark, grey and cold and I could actually see fresh snowfall on the distant peaks. As I stood there wondering about the weather, Doreen, our tour organiser and manager, came around to ask us to be packed and ready to leave. Since the weather forecast was not encouraging, Pawan, our driver, had suggested that we leave Sangla at the earliest. The next hour was a rush as we packed and got ready to leave. While we had a hurried breakfast, our bags got loaded into our 3 vehicles.

As I got into my vehicle, I noticed that Pawan’s normally relaxed and mischievous face wore a worried look and I soon realised why. The road leading from Kinner Camps to the main road was not tarred or metalled and what was a passable dirt track had turned slushy with the rain. And combined with a very steep ascent, the ride to the top could be a tricky one.

It was a silent group that got into the vehicles and the only sounds were that of the falling rain. With a prayer on everybody’s lips, the vehicles took off. The first two vehicles made it to the top without any incident.

The third vehicle got stuck.

We were asked to remain inside the vehicles, while Pawan went to deal with the stuck vehicle. Due to the rain, we couldn’t see anything and after what seemed like ages, but was perhaps just 15–20 minutes, the third vehicle too came through. And once again we were on the road with the hope that the roads leading out of Sangla would still be motorable and that we could leave before the weather or the roads worsened.

But it was not to be. When we reached the beginning of the road that would lead us out, we found a line of vehicles standing there and a longer line of worried faces of other tourists all wanting to leave. Apparently, there had been a series of landslides on the road and one part of the road had just disappeared. Though the local Public Works Department (PWD) personnel were waiting to carry out the repairs, they could not do so till the rains stopped. 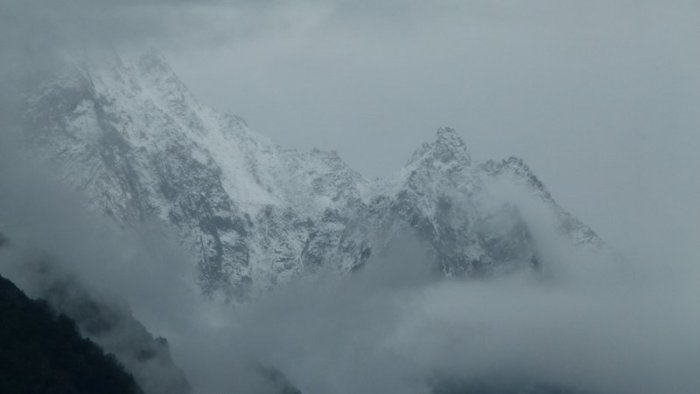 Here we took a break for lunch and after a delicious, hot thali at a tiny restaurant in Sangla, whose name I have now sadly forgotten, we were back to watch and wait. And pray as well.

4.00 pm Waiting inside the car as it continues to rain outside

By now, we received confirmation that there was going to be no attempt by the PWD to repair the road and repair works would only be carried out the next day, if the weather improved. That meant we had to find a place to spend the night as going back to Kinner Camps was out of question — the road their had deteriorated completely.

After a short search we were lucky to find accommodation with Prakash Regency, a new hotel (we were probably among the first set of guests). The manager and the staff went out of their way to make us feel comfortable and safe in a reassuring way.

Once in our rooms it was to discover that the rain had soaked through the protective plastic covering and my  suitcase and had wet everything that was not placed inside a plastic bag.

In my stupidity, I had placed used clothes in plastic bags and clean clothes directly in the bag. You might be interested to know that I was up half the night ironing my clothes dry! 😦

The next morning, it was to find that though the cloud cover was heavy, the rain had stopped. In fact, Mr. Mohan Prakash, the hotel’s proprietor said that it hadn’t rained for 4–5 hours. He was as happy as we were with the news as fruits from his orchard were due to be transported to Mumbai that day by road.

After a hot breakfast of paranthas and tea, we were off and headed straight for THE road to see a welcome sight: that of the road-building vehicles of the PWD trundling away to repair the road. It was 10 am and the wait began again.

11.25 am: Two Kinnauri women in traditional wear walk by 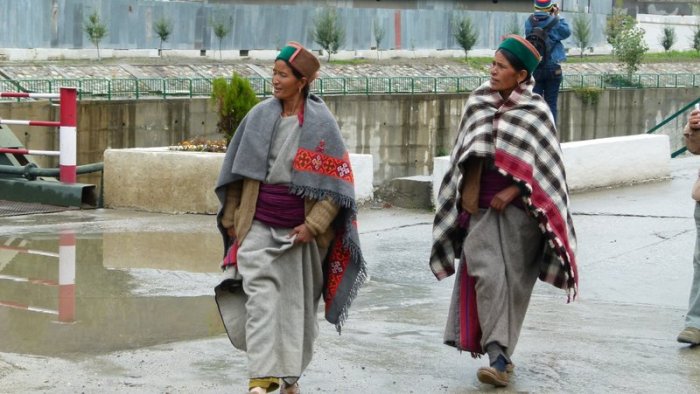 11.50 am: Will the roads open or not, this tourist seems to wonder.

12.40 pm: Photographing some of my group members 🙂

1.15 pm: Watching with alarm as the clouds came rolling in. Thankfully the weather held. 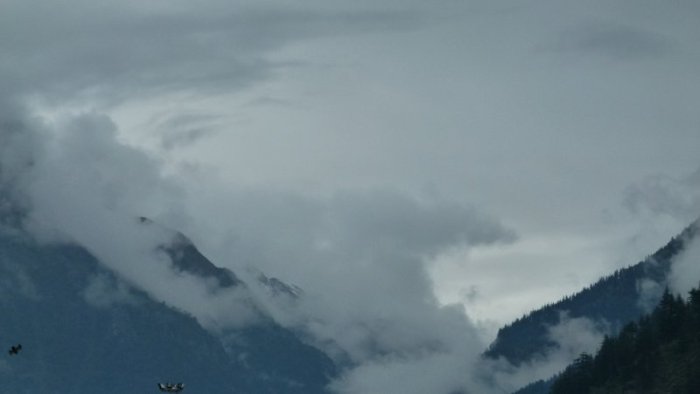 We headed back to Sangla town for lunch at the same place as the previous day. When we returned, it was to hear more welcome news: the road would open by 5.00 pm and we could line up and be among the first to leave. The road from Sangla to Karcham is a 16 km long, dangerous stretch. The damaged portion of the road was about 6 km from Sangla and we were asked to park about a km from that site. Once our vehicles were parked, I walked to the site where the road was being constructed.

Yes, constructed. Not repaired, as there was no road to repair.

3.00 pm: The road being constructed 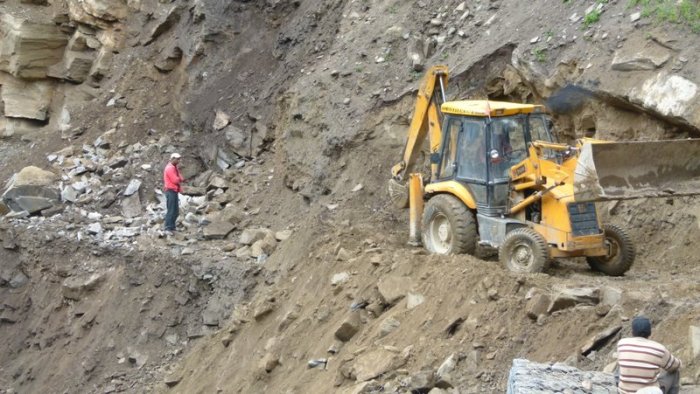 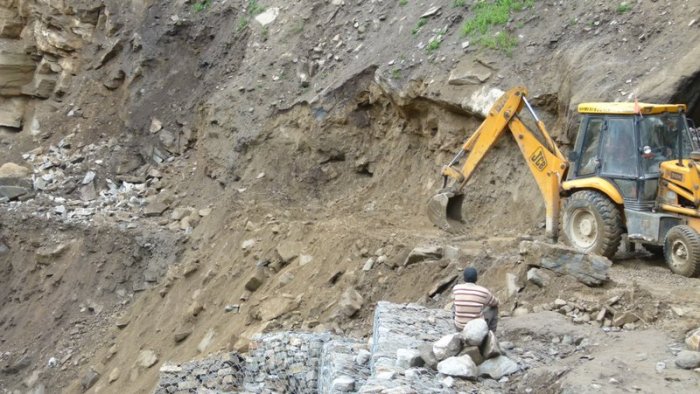 It was fascinating and horrifying to see the fragility of the roads. The new portion of the road was literally being gouged out from the mountainside, causing more rocks to crumble from the top. But the PWD people did not seem bothered nor were the drivers gathered around to watch the road being made.

4.20 pm: “I think we should be through in about half-an-hour,” Pawan, in the orange jacket, seems to say.

And exactly at 5.00 pm, the road was thrown open to wide cheers, whistles and claps. As per protocol, inbound traffic to Sangla was allowed in and only then were we allowed to leave; ours being the 6th vehicle to leave. We held our collective breaths when the vehicles moved over the newly constructed road and relief did not set in till we reached Karcham and joined the NH22.  I think we all relaxed only when we reached our hotel in Rampur that night.

As I read what I have written, I realise that it captures the sequence of events fairly well, but fails to convey the emotions that I went through. Emotions that are frankly quite difficult to write about. But let me try.

I wasn’t unduly alarmed or worried about the weather or the fact that we were ‘stranded’. Just hugely impatient. It was only when it was announced that we would have to look for a place to stay the first night did I realise the gravity of the situation. That while we were looking for just one night’s stay, it could very well be several night’s stay as well.

I got angry. The anger then gave way to despair and then worry. Who will take care of Amma? Who will take her for that check-up? How will I pay that credit card bill at the end of the month? And the other utility bills? Do I have enough clean innerwear in case we were  stranded? How will I finish my teaching? And those pile of papers to edit? [ As I read this, I am smiling, but at that time I was very worried.]

The impatience and anger against the bad weather was overwhelming. Mind you all this was silent anger. I didn’t rage or rant or scream or cry or have hysterics. For that matter, none of my group members did. We all behaved like it was perfectly normal to wait in bad weather for roads to clear.

And then I noticed the people around me, the local people that is. They went about quietly and stoically in the face of such bad weather. Maybe they were used to it and this was just another one added to the long list of times Sangla has been cut off from the rest of the region. They would just shake their heads when we asked them about when the roads would open, refusing to commit a date or a time.

It was only later that I realised, how could they predict when nature was so unpredictable?  That this was not in our hands and that nature would take its course. And that it was so important to be patient.

It was difficult to appreciate at that time how lucky we were. We were held up for just a day and we had a comfortable place to stay in, warm food to have and a warm bed to sleep in. We were not inconvenienced in any way, except for the fact that our itinerary in Sangla was shot to pieces. We were luckier than the thousands who get stranded or worse injured or killed every year due to landslides, floods and avalanches. Yes, we were very lucky and very blessed too.

But at that time it was so difficult to understand that. All I wanted to do was to get out of Sangla and head home. Today I can look back (it’s always in hindsight, isn’t it?) and say that I came away with an important lesson on patience. And like most of life’s lessons, it came when I least expected it.

17 thoughts on “Stranded in Sangla !”