Neighbourhoods of Mumbai is a series that will explore the different areas of Mumbai, their history, their sub-cultures, their architecture, the changes sweeping through them, and what makes them tick.

How difficult can it be to write about a place that I have known all my life? I would have said not very, till I sat down to write this post on Matunga, a central suburb of Mumbai. Read on with advance warning that it is a long post ! 🙂

Matunga is where my mother grew up, where I spent a part of my childhood, and a place that is so much part of me and my memories that I’ve never given it a second thought. So when I heard about a guided walk of Matunga conducted by a fellow blogger and friend, Rushikesh of Breakfree Journeys, I was surprised and intrigued. Surprised, because someone found it interesting enough to conduct a walk, and intrigued because I wanted to know what exactly was being covered in the walk and if they would look at Matunga the way I saw it and do it justice.

On a Saturday evening earlier this month I went on the 2-hour walk that took me through the history of Matunga, its development, the different communities that are resident here, its architecture, it unique sub-culture, its eateries, the changes sweeping through it… Some of what I learnt on the walk was new to me, some of it was a literal walk down memory lane, and some of it was seeing the same place through new eyes. Join me as I take you on that Matunga walk and also share my memories and thoughts about the place.

The etymology of Matunga is quite interesting and there are two main theories with regard to that and you can take your pick: (i) From the word “Matang” or elephant in Marathi. It is believed that the elephant stables of 14th century King Bhimdev were located in Matunga. (ii) From sage Matang of the Ramayana, who is believed to have settled in the area after his wanderings in the sub-continent.

Matunga was a swampy bog in the early days of the British occupation of the 7 islands, which would later become Bombay (now Mumbai). It must have been a miserable place at that time, especially during monsoons and summers, but was important from the defence point of view for the British, who built a military outpost in Matunga sometime in the 18th century. Illness and diseases were rampant in the area and casualties among the soldiers were high. In late 18th century, the military outpost was abandoned and the soldiers shifted to Ahmednagar.

After the British left Matunga, their army buildings and barracks fell into disrepair. Not much is known about Matunga of that time, except that it was occupied by the Koli, Agri and Kunbi communities who made a living from farming and fishing. Matunga was largely ignored by the British and this might have continued if the Bombay Plague of 1896 had not happened.

The plague killed thousands of people living in Bombay and thousands more fled the city in panic. Unsanitary conditions and overcrowding was deemed as the reason for the plague, and the city authorities decided that Bombay had to be decongested and civic amenities had to improve. This led to the setting up of the Bombay City Improvement Trust (BCIT) in 1898 through an Act of the Parliament.

The BCIT formulated the first ever planned suburban scheme in Bombay in 1899–1900 — the Dadar-Matunga-Wadala-Sion scheme — with residential, commercial and mixed areas. As per the scheme, no building was to exceed three storeys in height, and all buildings had to have open spaces between them. The scheme also included parks, gardens and broad roads all of which didn’t just remain on paper but were actually executed. It was on the walk that I really appreciated why most of Matunga has such broad roads even today, and why there is a certain ‘space’ around buildings, not seen in newer constructions.

The BCIT could not implement their scheme immediately as land acquisition took time. Though available literature makes no mention of it, the resettlement of the Agri, Koli and Kunbi communities may have been forced and would have been more like an eviction rather than resettlement. If land was given to them at all, it would have been in far off places like present day Mahul and Chembur or maybe none at all.

When construction of the buildings finally began in the 1920s, it a new architectural style sweeping through Mumbai at that time was adopted — the Art Deco style. All buildings were well-designed and most flats were two- or three-room apartments with large balconies, good ventilation, and separate areas for drying and dressing. My grandparents moved into one such flat in an art deco building in 1939 and were there till their deaths in 1980. 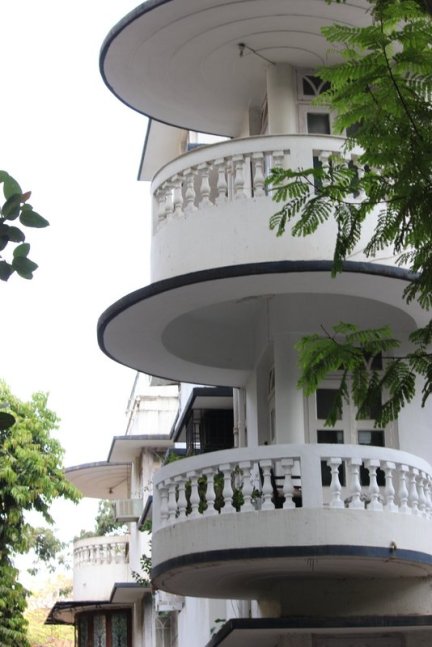 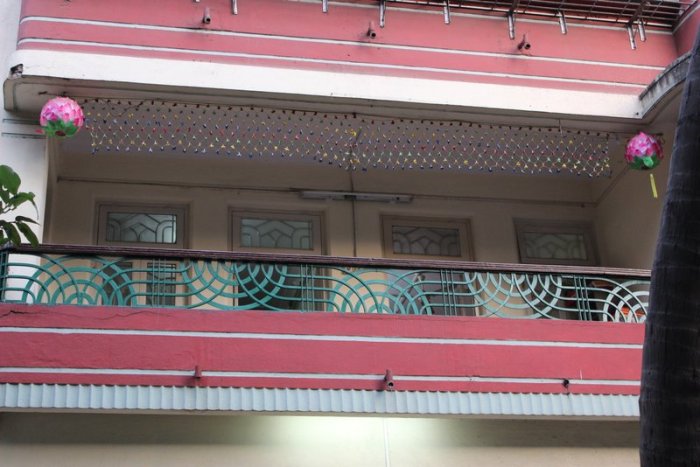 My understanding of Art Deco is, but a few months old and it was amazing to see the buildings through that knowledge on that walk. Most people think that art deco architecture is only restricted to South Mumbai; actually it is found all over Mumbai.

Along with residential buildings, educational institutions also set up base in Matunga and even today they remain among the best known in Mumbai, for instance, Don Bosco School, Ruia, Podar and Khalsa Colleges, VJTI, SIW School…

The earliest communities to move to Matunga were people from the South, especially those from Palakkad and Travancore regions. These were people who filled the clerical and officer positions in industries and offices proliferating in Mumbai at that time. And with them came their cultural milieu — temples, hotels catering South Indian food, and stores selling South Indian provisions.

The 1940s to the early 1960s seems to have been the golden period for Matunga. It was the place to be in and many Bollywood stars and musicians lived there — K.L. Saigal, Raj Kapoor, Nalini Jaywant, Vidya Sinha and Geeta Dutt — before they moved to other suburbs. It was a time when roads used to be washed every day and the municipal authorities would come knocking on your door if you dried your clothes in public ! There was a tram service in operation, in addition to the BEST buses and suburban local trains for public transport. Music and dance classes flourished and Matunga was quite the hub for cultural performances.

It was also a time when the sense of community was strong and the various parks and gardens played an important role fostering that. Rushikesh mentioned that music would be played on gramophone records at King’s Circle (now known as Maheshwari Udyan) in the evenings and people would congregate there to listen to the music and also socialise. It was also a time when Matunga was very safe and my mother remembers returning home alone from Shivratri Puja at the temple after midnight. Why, I used to be sent on errands as a 6–7 year old alone !

The 1970s and later brought about changes in community patterns and profile. Real estate prices shot up making Matunga unaffordable for those in service and with growing families in need of space. The South Indians started moving out and the Gujarati business families, the only community who could afford to buy real estate, started moving into Matunga. This was also the time when Matunga had its own gangster — Varadarajan Mudaliar or Varadabhai. I remember the grand Ganesh pandal he would set up outside Matunga station every year and receive “offerings” from devoted followers.

Our family left Matunga and Bombay in 1980 and returned to the city in 1993, though not to Matunga. We found it changed in many ways and yet, the essence of Matunga remained and over the years every little change was noted. That Saturday walk with Breakfree was another opportunity to note the changes in this neighbourhood and also things that had remained the same.

Let me first share with you what has not changed.

Then there is the smell of freshly ground coffee, of priests waiting outside temples, the flower stalls with over-sized garlands, silk saree shops, the gold jewellers… all these are still around.

But lots of changes have happened and some of them have changed the face of Matunga. The many shops that have closed down, the sugarcane juice stalls which have disappeared, traffic jams caused by too many cars and SUVs… the list is pretty long.

In the last decade or so, whenever I visited Matunga it was always to the market area to buy whatever stuff that my mother would ask me to get. It would be a nostalgia-filled trip and I would go back home happy. Occasionally, I would take friends or meet them at Matunga for their South Indian food fix and my nostalgia fix and both sides would return happy.

That Saturday, I was able to look beyond just nostalgia and look at change as something that is the natural order of things. For the first time, I saw Matunga beyond its market. I heard the complete history of Matunga and was able to appreciate and understand its development, its unique sub-culture, and the changes that have occurred and the changes that are happening.

Not that I approve of all the changes or the direction that Matunga is taking, but given the larger changes happening in society it is only inevitable. Unlike my mother who finds the changes disturbing and prefers not to visit Matunga, unless it is absolutely essential.

Thank you Rushikesh and Breakfreej for the wonderful walk that you organised in Matunga and about a place that I thought I knew inside out.  🙂

Note: This was not a free walk and I paid the full fee for the guided tour.

81 thoughts on “Neighbourhoods of Mumbai 1: Matunga”