It’s a little before 7 on a muggy Saturday morning in March earlier this year.

At Bandra’s Basilica of Our Lady of The Mount, otherwise known as Mount Mary, the morning service is in progress. The stalls outside the Basilica are already open for business. At that time of the morning, there are hardly any people out on the roads; an occasional rickshaw, car or jogger pass by stopping for a quick prayer before going on their way.

I had wanted to attend the morning service at Mount Mary, but the bus that got me to Bandra from Navi Mumbai got delayed. Not wanting to enter the church midway through a service, I decide to wait at the Oratory of Our Lady of Fatima, which is across the road from Mount Mary.

With me is a friend and together we plan to explore Bandra’s Christian heritage that morning by visiting some its places of worship. I pick up a pamphlet on the history of Mount Mary from one of the stalls outside the Basilica and settle down on the steps of the Oratory to read. 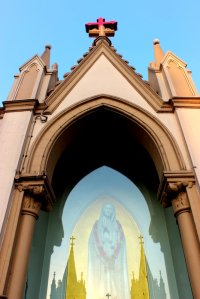 Christianity officially arrived in Bandra in 1573 with the appointment of a Jesuit Pastor for the area, Joao Diaz. However, Bandra had already been in the possession of the Jesuits since 1568 and one of the first things they did was to build a mud shrine or oratory for their private worship on the site of Mount Mary.

This mud oratory was the first of the 4 structures to be built on the site. Due to lack of proper records, it is not clear when the foundation for the oratory was laid, but it is generally believed to have been in 1570.

In 1648, the shrine was enlarged to become a public chapel. Over the next 2 centuries or so, following attacks by Arab pirates and the Marathas, the chapel was rebuilt, destroyed and rebuilt again till in 1904, the present structure, in the Bombay Gothic architectural style, was built. Its distinctive twin spires rise up to 98 feet and could once be seen across the creek clearly. In 1954, the church attained the status of a minor Basilica.

Sounds of people talking interrupt my reading and I look up to see that the service is over and people are coming out. We make our way to the Basilica and as soon as I enter I’m drawn to the statue of Our Lady in the sanctum sanctorum. Made of wood, this statue was brought all the way from Portugal in the 16th century by the Jesuits and placed in the mud Oratory. It is this statue that attracts millions of pilgrims across faiths and cities in India every year, culminating in the annual festival in September.

A group of tourists file into the Basilica silently. Some sit on the pews to pray, some walk around, and some walk straight up to Our Lady to pray, making offerings that they have picked up from the stalls outside.

We leave after a while and after saying our own prayers.

Even though the Basilica of Our Lady of the Mount predates the other churches in Bandra, it is not considered to be the oldest church as it is not a parish church. The Church of Santa Ana had the distinction of being the first parish church of Bandra.

Pastor Joao Diaz began his missionary work in the area by building a makeshift church and a boarding school for boys near the Bandra creek in 1574. By 1576, he had a regular structure for the church which was dedicated to St. Anne or Santa Anna. As Christianity spread in Bandra, the number of parishioners increased necessitating the creation of a new parish  in 1616 — St. Andrew’s.

The exact date of construction of the Church of St. Andrew’s is not clear though there are records of it being constructed in 1575 and that it was in existence by 1601. For more than a century, Santa Ana and St. Andrew’s were the only parish churches in Bandra. On March 25, 1739, the Marathas invaded Bandra and destroyed many places of worship there. Santa Ana was destroyed too, but not by the Marathas; the British (who were stationed across the creek in Mahim) blew it up — with the supposedly tacit support of the Portuguese — as they perceived a threat from Marathas using that location as a security outpost. With this, the Church of St. Andrew’s became the oldest church in Bandra.

The Church of St. Andrew’s is a leisurely 15-minute stroll down the hill to from Mount Mary. Though I have visited St. Andrew’s twice before, I haven’t really seen it as both times it was undergoing renovation. When I enter the church compound I stop to admire the simple and distinctive Portuguese style façade that has always impressed me. 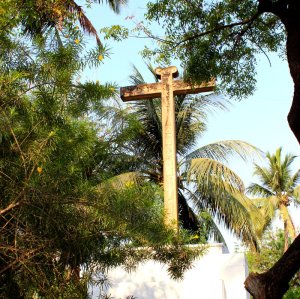 To the left of the church building and amidst the many graves and crosses stands a tall cross. A really tall cross that towers over the rest. On one of my earlier visits to St. Andrew’s I had mistakenly assumed that this was a tomb marker for the grave of an important person buried there.

I discovered later that this was no ordinary cross. This 17 feet tall cross, which is mounted on a 12 feet high pedestal, is carved from a single block of stone and covered with religious symbols. Perhaps, the oldest stone cross in Mumbai, it was originally at the Church of Santa Ana. It was recovered from the ruins after the church was destroyed and then installed at St. Andrew’s in 1870. 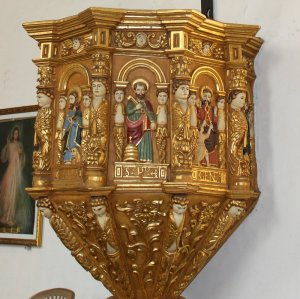 When I enter the church, I’m delighted to find that renovation is complete and all the original details can be seen — the gilded wooden pulpits, the main altar… The freshly whitewashed walls and the polished wooden pews give a new feel and look to the church. I have to keep reminding myself that almost everything here is over 400 years old !

There is no one at the church apart from us and after exploring the church, we leave.

From 1739 to 1853, St. Andrew’s was the only parish church in Bandra till St. Peter’s parish was formally created. The foundations for the St. Peter’s Church building was laid in 1852 and completed a year later. By 1938, the original church building of St. Peter’s was found to be inadequate and a new building was built to accommodate the growing number of parishioners. 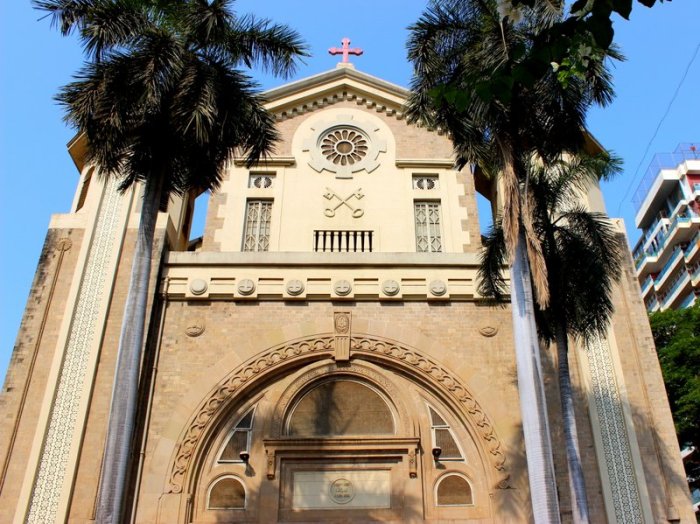 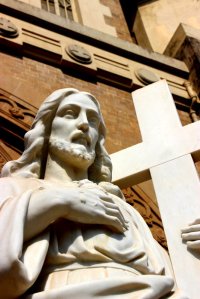 St. Peter’s Church is on Hill Road and is a short walk from St. Andrew’s. Though I have passed St. Peter’s many times before, this is the first time I’m visiting it.

The handsome Romanesque façade of St.Peter’s is visually stunning and I can’t help but stop and admire it. At the entrance to the Church is a marble statue of Christ with the inscription “I am the Resurrection and Life”.

The Church interiors are vast and unlike most churches which have a rectangular hall, St. Peter’s is squarish. It is easily the largest church I have seen and lives up to its claim of being able to seat a 1,000 people. The interiors are lit up with the light coming in from the stained glass windows creating a beautiful glow within. One of the highlights of the Church is a relief of Da Vinci’s “The Last Supper” at the altar.

Though morning service is over, the church is not empty; there are a group of people who are busy in a discussion. On seeing us, a couple of them come over and we get talking about the Church and its community. It is quite evident that this is a very vibrant and close knit community and there is a lot of good natured bickering and leg-pulling among them. When we leave it is with invitations to attend Easter celebrations the following Sunday and to drop in and ask for any information that we require. 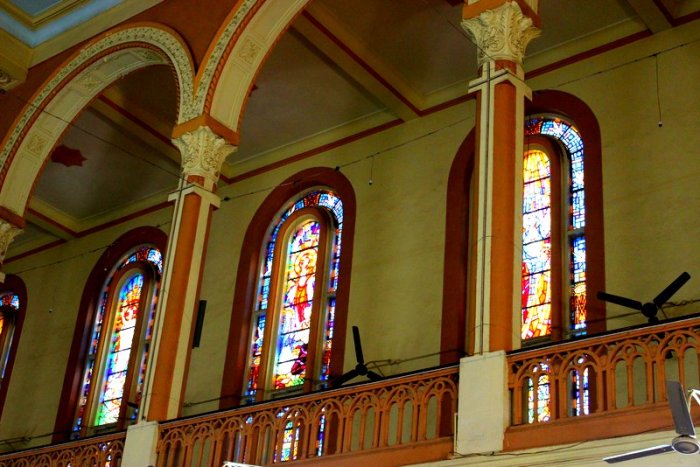 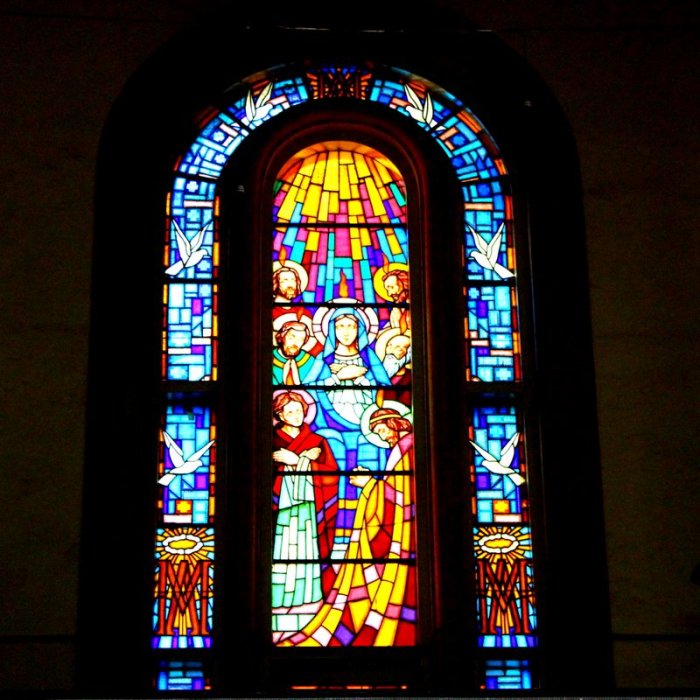 Bandra is almost overwhelmingly Roman Catholic with the exception of the only Anglican church in the area — St. Stephen’s.

When the Marathas ceded Bandra to the British in 1802 under the Treaty of Bassein, many British Protestant Christians moved to Bandra. St. Stephen’s Church was built in 1845 “to cater to the spiritual needs of British Protestant Christians living in Bandra and nearby areas”. St. Stephen’s Church is known for its stained glass windows (shipped all the way from England), which depicts stories from the Bible. The Church also has a well maintained cemetery. 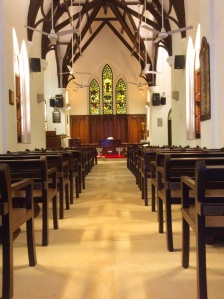 St. Stephen’s Church is on Mount Mary Road, just 5 minutes from the Basilica. Unfortunately, I couldn’t visit the Church that day in March, as it was undergoing renovation. I made a visit to Bandra in August just to visit the Church.

I fell in love with St. Stephen’s Church the moment I saw it. A cottage-sized structure, whitewashed walls, a red roof, shuttered windows fitted into arches, trees all around, quiet… what’s not to love.

It is the prettiest and most beautiful of the churches I have seen in Bandra. 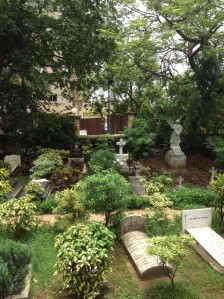 The interiors are even more beautiful — whitewashed walls, high ceilings with wooden rafters and soft golden light filtering in through the stained glass windows and the louvres of the shuttered windows. It was a magical sight.

The stained glass windows are stunning and their jewel tones so clear that I wonder if the windows too had undergone some kind of renovation or at least had some sort of a cleaning done.

I spend a peaceful time at the Church looking atstained glass windows and trying to decipher the stories they were depicting. I don’t think I was particularly successful, though ! 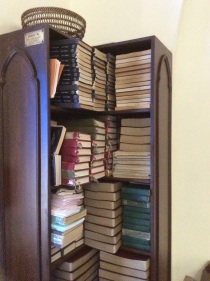 The 3 parish churches and the basilica presented in this post are not the only churches in Bandra.

As the Christian community continued to grow, new parishes got created. In 1894, the St. Peter’s parish was further divided when the Church of Mount Carmel was built and in 1982, the parish of the Church of St. Francis of Assisi was created from the Mount Carmel parish in 1982.

Bandra has more churches, chapels, shrines and crosses than any other part of Mumbai. The 3 churches and the basilica are perhaps the best known of them all and are important markers in the history of Bandra. An illustration, perhaps, that places of worship are always the nodal centre for a community and a religion to grow.

When I first thought of writing about my visit to these churches (and the basilica), I visualised them as separate, stand alone posts. But when I started writing, I realised what I had in front of me — a glimpse into the Christian heritage / history of Bandra. That’s how this post came about. I know, it is a long post, but I hope that you have enjoyed reading it and more importantly inspired you enough to visit them. 🙂

26 thoughts on “3 churches and a basilica: Exploring Bandra’s Christian heritage”