I visited the Sun Temple at Modhera on the last day of my North Gujarat trip in December 2014. It was a much-anticipated visit and I had spent the weeks prior to the trip salivating over the many photographs available online. I was so excited at the prospect of finally visiting the Sun Temple that I was awake much before the morning alarm rang.

I wanted to be at the Sun Temple by 9 am, but both the checkout at the hotel and breakfast got delayed. By the time the shared private jeep from Mehsana dropped me off at Modhera village, it was 9.30 am. A helpful villager pointed the path that would lead me to the Sun Temple and 10 minutes later, I was at the ticket office queuing up to buy my tickets.

It seemed to be a busy day for there were quite a few international tourists already making their way out of the temple complex, while bus loads of school children were entering it. Once I bought my ticket and a booklet on the Sun Temple, I entered the complex where a path lad me through well-manicured lawns, a museum before the Sun Temple came into view with a large stepped tank before it. And my first thoughts were that all the photographs do not do justice to the monument. It is far bigger and grander and more magnificent, dear reader, and do keep that in mind as you read further !

The Sun Temple at Modhera is supposed to have been built by King Bhimdev I of the Solanki Dynasty. Yes, the same Bhimdev I, in whose memory the Rani ni Vav was built. Based on an inscription found in the Temple, it has been dated to 1026.

The Solankis considered themselves to be Suryavanshis or descendents of Surya, the Sun God himself. It is believed that during the rule of the Solankis, sun worship was widely prevalent in the region and there were many temples and shrines dedicated to Surya. Over the centuries, this practice waned and the temples either fell into ruins or disappeared completely. This sun temple, too, fell into ruins after its sacking by Ala-ud-din Khilji. Currently, it is under the care of the Archaeological Survey of India who have renovated and restored it. In 2014, this Sun Temple was added to the list of UNESCO World Heritage Sites.

The east-facing Sun Temple is built on the banks of the river Pushpavati and is divided into 3 parts: (i) a stepped tank, known as the Surya Kund, (ii) the Sabha Mandap, and (ii) Guda Mandap or the main temple, which is no longer a place of worship. Though the sanctum sanctorum or the garbha griha is empty today, it is supposed to have had an idol of Surya in a chariot drawn by his seven horses and steered by his charioteer, Arun. This entire ensemble was made of gold and was placed in a pit filled with gold coins. It is believed that the gold (idol, coins and all) were plundered by Mahmud of Ghazni, but the dates don’t seem to match — Ghazni left Gujarat at the end of 1024 and the Sun Temple wasn’t built until 1026.

I read this brief history of the temple seated on the steps of the Surya Kund. While the story of a golden idol and details of remarkable carving on both the Sabha and Guda Mandaps are fascinating, it is the rectangular Surya Kund that has completely captured my attention and imagination — the geometry, its size (56.6 X 36.6 m) and the 108 shrines it is supposed to have.

The Surya Kund was a sacred tank and visitors to the temple could not worship in the temple until they had a ceremonial dip here. Seeing the unappealing green of the waters, it is a little difficult to believe that anyone would have taken a dip in its waters; hopefully the waters were cleaner and clearer then.

I decided to explore the step tank first before heading over to the main temple.

The 108 shrines are distributed over various levels of the tank. The largest shrines are in the East (Vishnu reclining on Sheshnag), South (Shitala Mata) and North (Nataraj). Many of the smaller shrines either have nothing in them or have figures that are mutilated or eroded beyond recognition. Still, I could make out some avatars of Vishnu, Bhairava, Ganesh, etc.

But it is the step like feature of the tank and its geometry that fascinates me the most and I spend more than an hour walking up and down the steps startling squirrels and lizards and sometimes getting startled in turn. The blue and cloud streaked skies also presented the perfect photo-ops. Some captures 🙂

I could have spent the entire day just sitting on the steps and watch the play of sun and shadows creating interesting geometrical patterns, but the temple beckoned as well. I climbed up the steep steps leading to the temple from the Surya Kund as a devotee would have done centuries ago. The devotee would have passed through the Kirti Toran or a victory arch, but today only the pillars remain.

The Sabha Mandap is a pillared structure with half walls and open in all four directions. A platform runs around the sides and this is where musicians used to sit and perform. Though the walls are plain, all the pillars are sculpted with scenes from mythology as well as musicians performing and dancing girls in action. The exterior of the Sabha Mandap has carvings as well, but it is not as extensive as that of the Guda Mandap or the main temple. 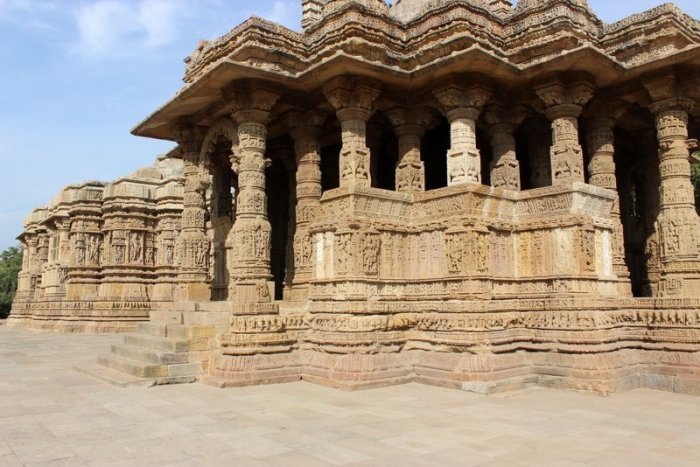 The Guda Mandap is built just behind the Sabha Mandap and I walked through the Western doorway of the latter to get to it. Unlike the Sabha Mandap, the main temple is walled, dark and smelling strongly of bats. The central dome is clearly visible unlike from the outside which only shows its destroyed, truncated form.

I peer into the garbha griha and try to imagine all the gold and fail — it is too ‘batty’ inside. I would have like to go around the central shrine — the best of the carvings are supposed be at the rear of the shrine, but I don’t have a torch and the high-pitched squeaks of the bats, not to mention their smell, is overwhelming. I decide to explore the outside instead.

The carvings are a mix of the everyday and the divine. Brahma, Shiva, Vishnu, Saraswati, as well stuff like the one I have put together in the collage below: foot massage or foot spa, worshipping a lingam, among others. Whimsical, serious, cute even… I loved the details. 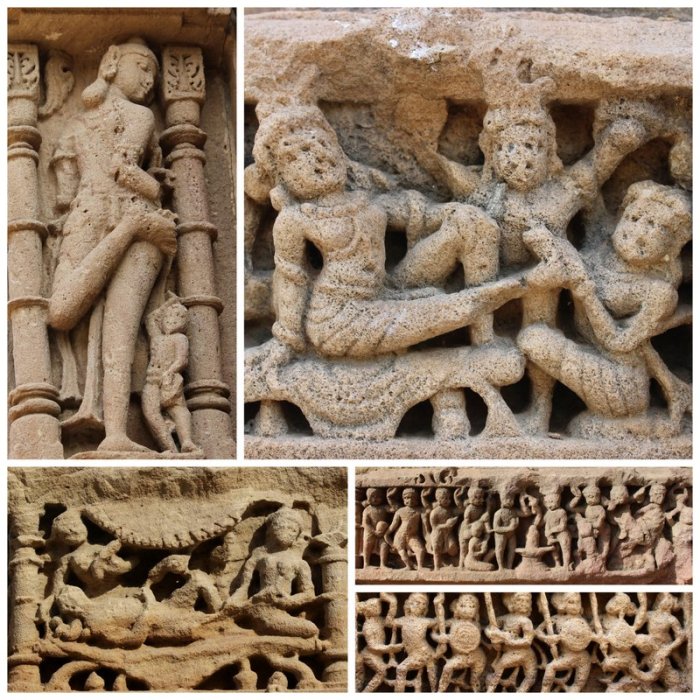 I rounded a corner and there he was, Surya standing up tall on his horse-drawn carriage, with lotuses in two of his hands. I surprised myself by remembering and reciting a verse from a long forgotten hymn  from childhood, the Aditya Hridayam. 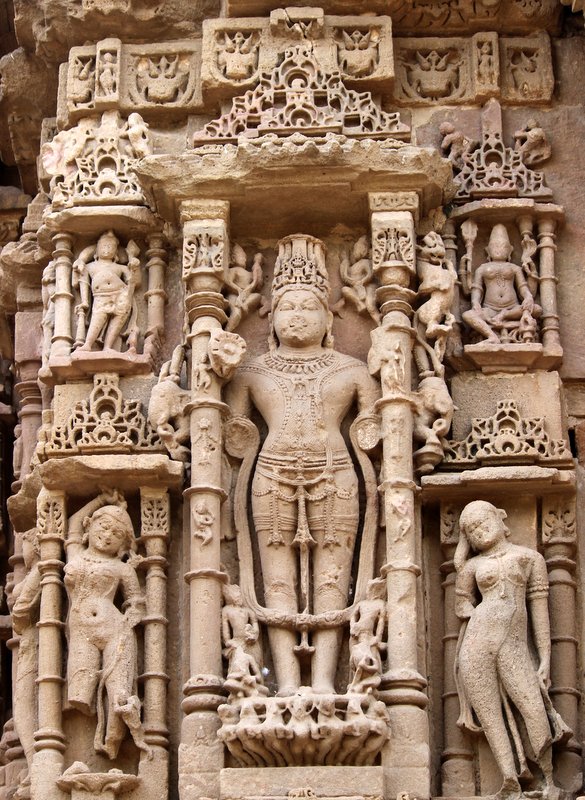 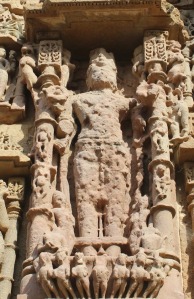 Surya sculptures are placed at regular intervals on the external walls of the main temple, but the state they are in vary from sculpture to sculpture — some have appendages missing, some are pockmarked with age, and some have weathered so badly that they look like they’ll crumble any minute. I have shared a picture of the best preserved Surya above; for a comparison with a poorly preserved one, look at the photograph on the right.

As I walk around the Sun temple Complex and note its state of ruin (and also repair and restoration), I realise that all the damage has not been caused by invaders alone. The quality of the building stone — sandstone — has also contributed to the present-day state of the Sun Temple. The sandstone is quite coarse and in many places I could see individual grains quite clearly. The quality of sandstone used here is different from what is used at Rani ni Vav, which is finer grained. 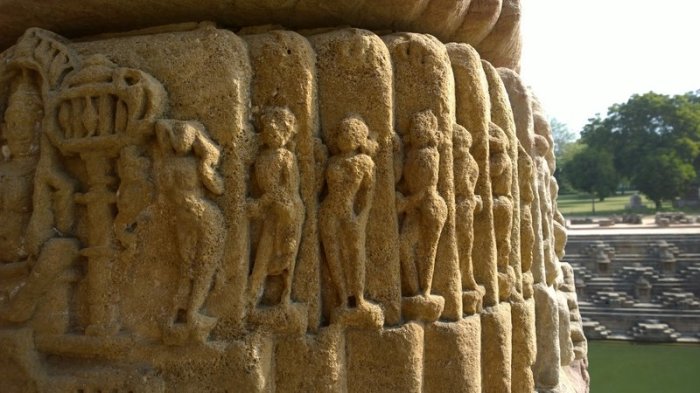 After exploring the Temple Complex, I make my way to the on site museum. Though it is open, there is no electricity and with poor natural light there isn’t much I can see. The security guard allows me in, but follows me around like I’m going to run away with an exhibit or two !

It is almost one when I leave, happy that I finally visited a monument that I had been dreaming of for a long time. My fascination with sun temples began when I visited the one at Ranakpur in February 2013. That was the first sun temple I visited and its unique and then unfamiliar (to me) iconography remained with me. During this visit, I was able to not only identify the familiar iconography, but also spot the differences in the depiction of Surya in both the temples. At the Ranakpur Sun Temple, Surya is seated cross-legged on the chariot. Here, at the Sun Temple, Surya has company in the chariot — his charioteer Arun and two women with bows and arrows, and he is standing tall.

Visits to two sun temples later, I am keen to visit other such temples and study the iconography and of course, history associated with them. I am already looking forward to that journey and wonder where all it will take me.

I end this post with one last image, and a panoramic one, of the Suryakund. You can click on the photo to see an enlarged version.

44 thoughts on “The Sun Temple of Modhera”

#MuseumTreasures 3
Just arrived !
My lunch - stir fried veggies and pan fried paneer in a bed of tangy sauce based on a recipe by @snehasinghi1 (Thank you !) It was delicious, if I may say so myself. 😋
#MuseumTreasures 2