When I arrived in Nawalgarh, the first work of ‘art’ I noticed was not its famed frescoes or even its grand havelis — it was a piece of graffiti.

I was looking out of the window of the car I was travelling in, hoping to catch a glimpse of a fresco, when the car suddenly braked to let a cow pass. That’s when I saw the graffiti — a yellow rectangular patch with blue lettering on a cracked and patched surface. It was the contrast of the freshness of the graffiti against a dull and old surface that attracted me and I took a picture of it for that reason. The words (for those who can’t read the Devanagari script or understand Hindi) can be roughly translated to:

Even if it means losing your life, don’t give in to anything improper or immoral.

As the car moved ahead, I dismissed the graffiti as a one-off and resumed my search for the frescoes. Little did I know at that time that along with the frescoes and the havelis, I would be seeing other graffiti all over Nawalgarh.

As I explored Nawalgarh, I came across graffiti on the walls of abandoned havelis, painted over a faded fresco, in the marketplace, in the verandah of a house, outside a shop… In fact, this graffiti became a recurring work of art themselves, and almost as ubiquitous as the centuries-old frescoes.

The graffiti had a distinct visual signature and were instantly recognisable — yellow rectangular background, blue lettering, an encircled number in the top right hand corner, and the ‘signature’, of the organisation responsible for it, Gayatri Shaktipeeth Nawalgarh.  Only 3 graffiti were not by the Gayatri Shaktipeeth. The themes ranged from messages to protect the environment to personal and moral development to warnings to meat eaters.

Presenting a selection of 15 graffiti that I saw at Nawalgarh. For those who cannot read the Devanagari script or understand Hindi, the translation is provided as the caption. Clicking on any of the pictures will start a slide show and once you have finished, don’t forget to come back to read the rest of the post.

“Trees purify the environment by removing the poisoned and polluted air”

“Planting trees is a great deed, with each tree planted equivalent to that of 10 sons” 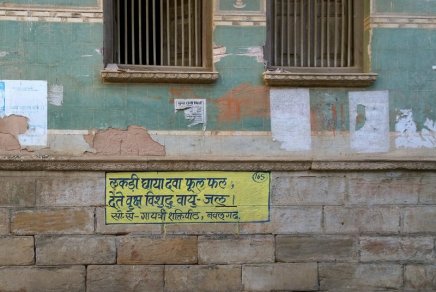 “No matter how big the crisis or sadness, there should always be a smile on your lips.”

“One can overcome any crisis with courage and fortitude”

Note that this graffiti is painted over a fresco. “Five Pandavas are acceptable to the burdensome 100 Kauravas”

Those who are the followers of God spread love, while those who are inherently selfish or self-centred only incite riots” 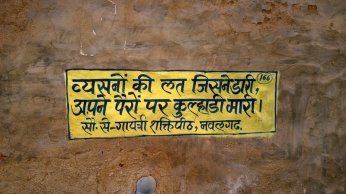 “Those who have addictions will dig their own graves”

This one was a little unclear, but it says that refers to the fact that eating meat is not good.

The original panel here has faded and two or three layers of graffiti are visible. 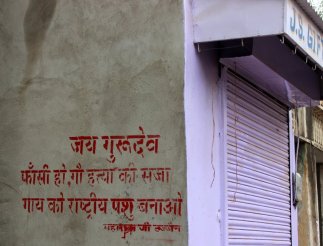 This graffiti is a message from Maharaj ji Sajjan who says that “cow killers should be hanged to death and make the cow the national animal of India.”

This graffiti is a message from Maharaj ji Sajjan who says “Stay vegetarian, don’t drink alcohol, hang those who kill cows and make the cow the national animal of India.”

I was initially amused and dismissive of the graffiti, but as I began to see more of them during my exploration of Nawalgarh this gave way to curiosity. Part of the curiosity was also fueled by the fact that none of the other towns I visited in Shekhawati had any graffiti. It was interesting to note that the graffiti were numbered giving an indication of more to come.

The few locals I talked to about the graffiti were either amused by or were dismissive of my question. The reason for both reactions? They didn’t really know what the organisation was all about or who the people in the organisation were. One person even said, “They are nobody important.” But all the people asked said that the graffiti was new — about 4-6 months old (this was in January 2015) and new ones were appearing regularly. My question on why were these graffiti suddenly appearing was met with a puzzled silence.

For once, the internet hasn’t really helped me this time around with useful or reliable information on this. It is no wonder that I’m thinking about the graffiti even after all these months and wondering how many more have come up.

Tell me, have you come across such interesting graffiti during your travels?

PS: I am an awful translator and I know it. Apologies for the poor translation. 😦

18 thoughts on “Messages on the wall: The graffiti of Nawalgarh”

Appa, I can’t believe that it’s 10 years since you passed away. Long enough to get used to your absence, but not long enough to miss you and your gentle and non-judgmental counsel.
#MuseumTreasures 9
“Subtle is the path of dharma; we do not know it’s direction” ~ Yudhishthira (p.463, Mahabharata, Vol. 1 / Adi Parva)
#MuseumTreasures 8