One place that everyone I spoke to in Shekhawati said I must visit was Lohargal. And all gave different reasons for visiting it.

It is our hill station, said one. You get the best pickles in the world there, said another. It is a holy place and a dip in the tank will remove your sins, said the third person. There is an ancient sun temple there, said the fourth. The mention of the sun temple got me intrigued. Then another person said, “There’s a stepwell at Lohargal. If you’re interested in history, you must go there.” The stepwell was the clincher to visit Lohargal.

That’s how on my return journey to Jaipur from Nawalgarh, at the end of my Shekhawati trip, I took a detour to visit the stepwell at Lohargal. It was an hour’s drive from Nawalgarh through steady rain, narrow roads skirting the Aravali ranges, and some beautiful scenery.

When we arrived at the stepwell, which is on the road, the rain had lessened to a light drizzle.

As soon as the car stopped outside the stepwell complex, we were surrounded by the welcoming committee, a group of loud and aggressive langurs. They pounded on the windows, jumped on the roof of the car, tried to pull the wipers from the windshield — in other words I couldn’t get out of the car without the risk of being attacked. We stayed in the car for the next 10 minutes or so hoping that the langurs would go away, but they had no intention of leaving.

Just as I was wondering what to do, a local man, who was passing by, realised what the problem was. He chased the langurs away and once they had gone indicated that it was safe for me to venture out of the car. He also insisted on accompanying me to the stepwell and saw me to the car when I finished. Only then did he take his leave.

Ranjit, that was his name, also ended up playing guide at the stepwell. Surprisingly, or maybe not, there wasn’t any information on the stepwell — it’s name, builder, age… In fact, there wasn’t anything that indicated that there was a stepwell there. If I hadn’t been looking out for the it, I could have missed it altogether. 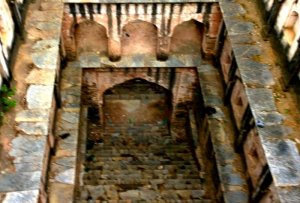 Locally known as Chetan Das ki Bawri or baoli, the stepwell descends seven levels below the ground. I could only see six levels, but Ranjit assured me that there was a seventh level, which was currently submerged under water. This level would be visible in summer when the water level fell. I was able to descend till the third level after which the steps were either missing or so crumbly that I decided against descending any further.

The steps are at one end of the structure and the well shaft at the other — kind of like the Rani ni Vav at Patan. But that’s where the similarity ends. The walls are plain with no ornamentation either in the form of sculptures or paintings. The only relief, if one can call it that, from the plain structure, are the arched galleries at every level. Years of water seeping from the ground and into the stepwell has led to the inner walls developing a striped pattern throughout.

On one side of the stepwell are the ruins of what would have been a palace, or a dharamshala or even a temple complex. Though, I wanted to  see it, Ranjit advised me against it as was home to the langurs. 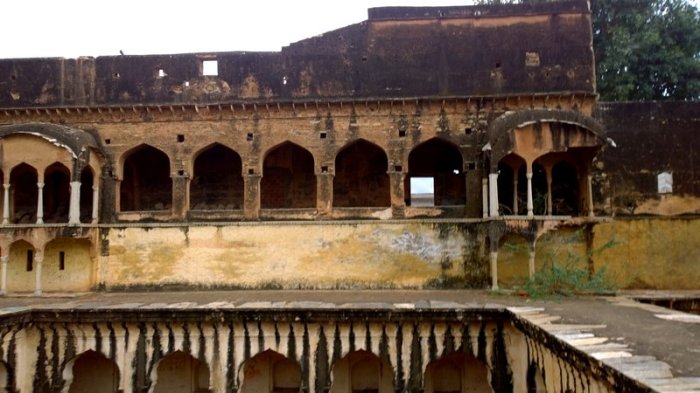 I had hardly been at the stepwell for 10-15 minutes when it started raining heavily forcing me to leave. As we walked back to my car, Ranjit told me that there was a water tank at the foot of the hills behind the stepwell complex, which collected run off and helped in recharging the groundwater levels. This, in turn, helped maintain water levels in the stepwell.

I find stepwells fascinating and can’t get enough of them — their architecture,  location, and most of all their stories. Chetan Das ki Bawri, too, would have a story to share; unfortunately, it needs to be found.I was indeed lucky to have Ranjit with me for I would not have come to know even the little bit of information I got on the stepwell otherwise.

In the 6 months since my return to Mumbai, I have tried to find more about Chetan Das ki Bawri. Who was Chetan Das? Did he build the stepwell? Or was it named after him? When was it built? The questions are endless and the answers elusive.

32 thoughts on “The stepwell at Lohargal”