Stories in Stone is all about sculptures — either standalone or entire narrative panels. Each post in this series will showcase one such sculpture, look beyond its iconography and deconstruct the details in an attempt to understand the idea and/or the story it conveys.

The UNESCO world heritage site of Mahabalipuram or Mamallapuram is extraordinary for the sheer number and variety of monuments, as well as their scale and design. Rock-cut temples, structural temples, relief panels and more vie for attention, each one more captivating than the rest. Though a fair number of the monuments are incomplete or unfinished and weathered, their beauty is not diminished.

The monuments at Mahabalipuram have been the subject of many a study, but none more so than a large relief panel carved on a granite cliff. It is a panel that has led to debates and divisions among art historians over what it depicts or denotes or refers to — Arjuna’s Penance or the Descent of Ganga [1]

Before I narrate their stories and discuss why the panel could be one or both or maybe neither, let us take a close look at the various elements that make up this panel. A real close look beginning with photograph below (please click on the picture to see a full size version).

This relief panel faces the seashore or the Bay of Bengal, which is not apparent today due to modern-day constructions. But more than a millennium ago, when Mahabalipuram was a thriving and important port town, this was the first thing a visitor alighting at the port would see. Today, however, there is no direct access from the seashore, and the approach is by road that runs parallel to the panel. A viewer has to divide attention between looking at the panel and keeping an eye out for vehicles passing by.

Now imagine, for the purpose of this post at least that there is no traffic to look out for and there is nothing but the panel in front of you and the Bay of Bengal behind you.

When you stand before the panel and see it in its entirety, it is impossible not to be awed or overwhelmed to see the details of the 100+ animal, human and animal-human figures carved on the rock face, each one vying for attention. Some will catch your attention immediately, while others become discernible only after the first, second or maybe third look.

As the details start settling in, one of the first things you will notice is a natural cleft on the rock face that divides it into two sections with most figures on either side of the cleft turned towards it.

This natural cleft has carvings of (in descending order, literally) a seven-hooded Naga, a three-hooded Nagini, and a snake with one hood. The Nagini is particularly beautiful and has a serene expression on her face as she contemplates or meditates on something. Since snakes are associated with water, they are symbolic of the presence of a water body here. [2]

Let us look at the section on the right of the cleft (please click on the picture to see a full size version). The elephants grab your attention immediately, not just because of their size, but because they are so life-like and so beautifully detailed. While the adult elephants look calm and majestic, the calves that you can see between the legs of the adults look playful and naughty. 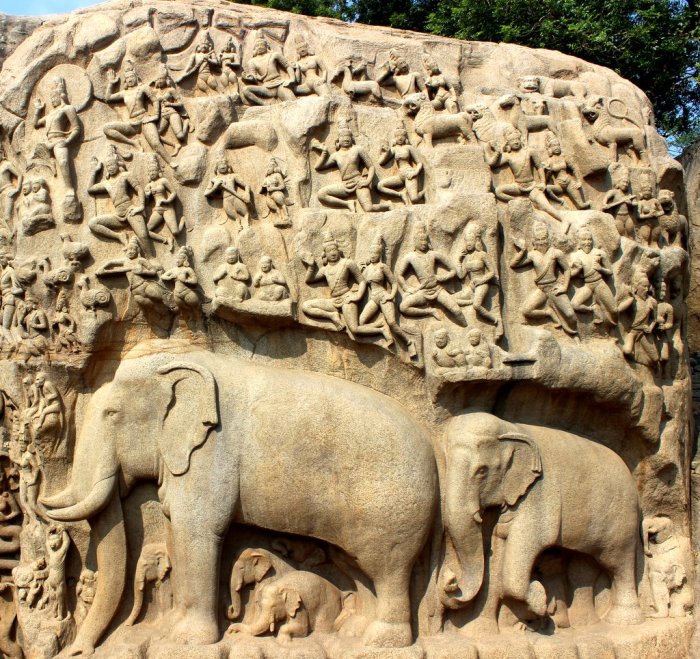 Just above the elephants are a whole range of supernatural flying beings comprising both vidyadharas and kinnaras (half bird and half human). There are also lions and birds (ducks?) interspersed between these supernatural beings.  As mentioned earlier, all the figures whether animal or divine, face the cleft.

There is another interesting detail that I would like to introduce you to at this stage, but will discuss it later in this post — a cat that is carved somewhere between the cleft and the trunk of the first elephant (please click on the photo below to see the details).

Now for closer look at the section on the left, where all the figures, with one exception face the cleft. This side of the panel is horizontally divided into two — an upper, fully sculpted portion and a lower almost bare, perhaps unfinished portion. A small section of the lower portion near the cleft has some figures — an emaciated man, probably an ascetic, deep in thought outside what looks like a temple/shrine (please click on the picture to see a full size version), a few more human figures praying or doing obeisance, a vidyadhara couple and a monkey.

The supernatural vidyadharas and kinnars are present on this side as well, though they are lesser in number as compared to the other side. From the lions, deer, boars(?) and birds, as well as human figures that look like hunters, this part of the panel could depict a forest (please click on the pictures below to see full-sized version).

And now we come to the two most important figures in the entire panel — a four armed figure, which immediately points to His divinity and an emaciated, bearded figure standing on one leg. We can immediately recognise the emaciated figure as the same one we saw earlier deep in thought outside a shrine.

The four-armed God is Shiva, who can be recognised by his attributes. One of his right hands holds his weapon, probably a trishula or trident, but centuries of weathering makes it appear more like a spear now. One of his left hands is in the varada mudra or the gesture of giving boons. Shiva is accompanied by his dwarfish, pot-bellied ganas, and one of them has a lion’s face carved on his belly! [3] 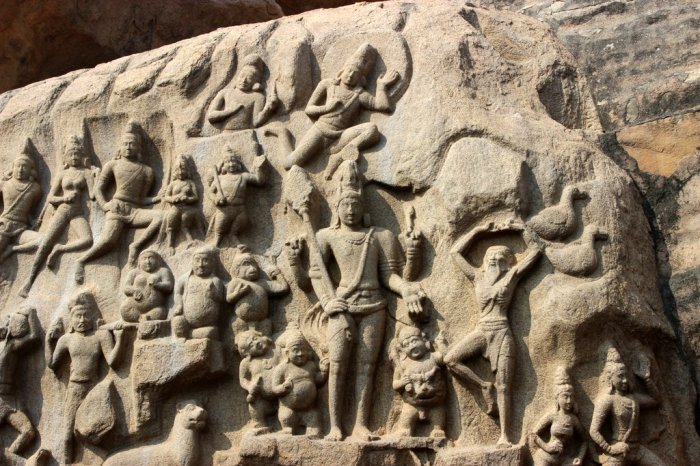 So, what does the panel convey? As mentioned  previously, there are two main schools of thought regarding this.

The first says that this panel is all about Arjuna’s Penance from the Mahabharata. Arjuna, the third of the Pandavas, undertook severe austerities to please Lord Shiva and obtain the Pashupatastra, a weapon that would ensure their victory against their enemies, the Kauravas. The above detail can be considered the moment when Shiva appears in front of Arjuna to hand over the Pashupatastra.

The second is the story of the Descent of Ganga, a sub-plot in both great epics — the Ramayana and the Mahabharata — and also one that revolves around austerities. This time it is King Bhagiratha who prays to the Gods for divine intervention to end a severe drought on earth. Moved by his penance, the river Ganga agrees to come down to earth provided someone could manage her destructive flow when she descended from the heavens. Bhagiratha undertook another round of austerities and pleased with his devotion, Shiva agrees to capture Ganga in his locks. The above photograph can be considered to be the moment when Shiva appears before Bhagiratha and agrees to ‘manage’ Ganga.

Once you have seen the details, you will realise that Shiva and the ascetic doing penance are the most important figures in the panel, and your eyes keep getting drawn towards it. The next logical question would be — who is the emaciated ascetic? Arjuna or Bhagiratha?

The answer would depend on the larger narrative(s) surrounding these two principal figures. Depending on how you see the connections or the disconnects, you’ll realise that one or both fit within the greater narrative. You’ll also realise that there are gaps and unconnected sub-narratives in the panel.

The other figures in the panel on the left seem to have no connection with the two main figures, except for the ascetic — who could be Arjuna or Bhagiratha — lost deep in thought in the lower portion. Though the hunters and the animals indicate a forest setting, there is nothing to say that they are connected with the ascetic or Shiva. The cleft with the snake carvings point towards a water source (that could be Ganga) near the ascetic.

Another important point to be noted is that the two halves on either side of the cleft seem to have no connection with each other, at least none that I can discern. But the one on the right does exhibit a certain light-heartedness and joyousness in the way the elephants and the supernatural beings are depicted. Could it be a celebration of sorts for reward for the austerities completed? For a victorious Arjuna or for the Ganga descending from the heavens?

Let us now go back to a detail that I had pointed out earlier in this post and one that needs greater discussion — the Yoga Cat or the Yogi Cat, who (almost) mirrors the pose of the ascetic. The cat’s eyes are open and surrounding him are a bunch of what look like adoring rodents.

This is the depiction of a story from the Panchatantra about a ‘holy’ cat who lives on the banks of a river, is a vegetarian, practices austerities and dispenses boons. The ‘holy’ cat’s ‘devotees’ are rodents who bring him food and when no one is looking the cat eats them up too ! A classic case of beware of false ascetics.

Various accounts refer to the Yoga/Yogi cat as the humour element or even the parodic element in this panel. Perhaps it is. But for me, it is this small, but very important detail, that points to the fact that what you see is not what you get. In other words, think before deciding on what the panel is all about.

Is it Arjuna’s Penance or Descent of the Ganga? Or neither? Or something else? Or just a set of random carvings on a cliff face?

If there is something that I have learnt about classical Indian art, it is this — it is never random, it is rarely literal, it is highly symbolic and it can be esoteric and abstract. It is often open-ended giving a lot of scope for interpretation and puts the onus of understanding on the viewer. This is one such work of art.

What do you think this panel is all about? Arjuna’s Penance or Descent of the Ganga? Neither of these? Or something else? I’d love to hear your views on this.

Stories in Stone: Arjuna’s penance or Descent of Ganga | The Chamunda of Chandabhaga | Shiva appeases Parvati |

22 thoughts on “Stories in Stone: Arjuna’s penance or descent of the Ganga?”