The moment I enter St. Thomas’ Cathedral in the Fort area of Mumbai, I am transported to England. Everything about the Cathedral from the cool white-washed interiors to the simple wooden pews to its polished brass memorials and wall plaques, and its many stained glass windows reminds me of the Anglican churches of England.

St. Thomas’ Cathedral is the first Anglican church in Mumbai and is also believed to to the oldest British building in this city. Though construction of the Cathedral of St. Thomas began in 1676, it was abandoned and remained neglected for nearly 40 years, when it was “adopted by an East India Company Chaplain in 1710. It was opened for worship as a church on Christmas Day in 1718″ (for details click here). St. Thomas’ was consecrated as a cathedral in 1837 and was selected for the UNESCO Asia-Pacific heritage conservation award 2004.

I love stained glass windows and spend quite a while admiring the many windows in the Cathedral. But the one window that completely captivates me is one that I almost missed. It is to one side and in a niche: a stained glass window of St. Thomas, flanked by two archangels St. Michael and St. Gabriel in a single frame.

END_OF_DOCUMENT_TOKEN_TO_BE_REPLACED

Do you ever have a song, an idea, a storyline, or an image stuck in your head? And it just refuses to go away? For some time at least? I have this with music — it could be a song, an instrumental piece, a jingle, etc. This becomes my “now’” song, and the “nowness”  (pardon my English here) could be for any length of time.

I love the rains, not so much for the romance associated with it, but for the freshness that it brings. It is a time for to take things a little slowly, for long walks, hot cups of tea, books to be read and listen to lots of music, particularly folk music. If you were to ask me what the connection is between folk music and the rains, I have no explanation.

Therefore, it is not surprising that my “now song is Anjan ki siti mein mhaaro man dole, a folk song sung by Rehana Mirza.

A mix of Rajasthani and Haryanvi, Anjan ki siti... has been pretty addictive and I have this song playing at home, at office… and often singing along with it as well. 🙂 I was introduced to this song by Teevramadhyam and I can’t thank him enough for this.

What is your “now” song?

In a corner of a large walled garden, just before the main entrance to Humayun’s Tomb entrance in Delhi, is the Afsarwala Tomb and Mosque complex. I found myself outside this small complex after entering the walled garden through an enticing doorway one cold and drizzly afternoon in February

It was a Friday and the Jum’ah prayers were over. The mosque was empty except for a man and 2 boys who were rolling up the prayer mats.

Initially all three of them were rolling mats on their own without any kind of interaction between them. Then, suddenly, the boys decided to do the task together. And amidst giggles and playful shoves, the two boys rolled up mats together, which the man then collected and put them on one side.

Once all the mats were rolled away, the man got down to the task of counting them. Meanwhile the boys started picking the dried leaves from the mosque courtyard in an attempt to keep it clean. But it was a windy day and the more leaves kept falling. The boys didn’t seem to mind and ran all over the courtyard chasing the leaves and each other and much gleeful laughter.

It is always wonderful to see children at play and I would have loved to linger and watch these two boys, perhaps talk to them and the man about the mosque and the service they carried out. But I had a meeting to attend as my cell phone alarm reminded me rather persistently, and I left rather reluctantly. For the remainder of the day, I was smiling away: right through the meeting, the return flight back to Mumbai that night… And I am still smiling as I type out this post.

Dear reader, tomorrow is the first day of the holy month of Ramzaan in the Indian sub-continent and I take this opportunity to wish you all Ramadan Kareem. 🙂 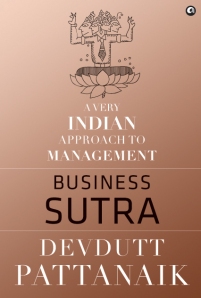 When Business Sutra: A Very Indian Approach to Management (2013, Aleph Book Company, pp. 438, Hardbound, Rs.695/-) was offered for review, I went through a dilemma of epic proportions. Authored by Devdutt Pattanaik, whose books and articles on Indian mythology I have read and enjoyed over the years, the book title had the dreaded word “management”.

Now, management books and I don’t see eye to eye, so much so that I completely ignore the management section in bookstores and pretend like they don’t exist. I’ve tried to read books recommended by friends and have found myself yawning with boredom or scratching my head at the drivel written. Management books are also probably the only reason why I don’t have a management degree ! On the other hand, I am a mythology buff and will do anything to get my hands on a book from this genre.

I’m sure you can appreciate the dilemma that I went through over deciding on whether to read the Business Sutra or not. I didn’t bite my nails or have hysterics. Just allowed my head (management) and my heart (mythology) to battle it out.

And the winner was… I got a copy of the book to read and review. 🙂

END_OF_DOCUMENT_TOKEN_TO_BE_REPLACED

It’s a hot and dusty day in February and the mid-day sun is relentless as is the perspiration that trickles down my back. And yet, I feel cold and shiver as if some one has walked over my grave.

I am at Chittorgarh Fort, the erstwhile capital of Mewar, and at the site that was once the cremation ground for members of the royal family. The site is also known as the Mahasati Sthal as this is where widowed queens would commit sati. According to the guide, from the vast quantities of ash found at this site, this is also where at least one of the three jauhars — ritualistic mass suicide through immolation committed by women and their young children in the face of certain defeat to Muslim invaders — that Chittorgarh Fort has witnessed happened.

Death before dishonour is a code that all Rajputs — men and women — lived by. While for men this meant dying in battle; for women, this translated into jauhar instead of being captured by the Muslim invaders. Available literature and ballads say that as the jauhar ritual began, the men would dress up in saffron clothes and ride out to fight their final battle and into certain death.

I feel an immense degree of sadness mixed with revulsion as I listen to the guide describing the jauhars. Though my eyes close automatically as if to keep out the horror, my mind conjures of images of this description and devastation. I try to recollect my day at the Fort in an attempt to divert my mind.

END_OF_DOCUMENT_TOKEN_TO_BE_REPLACED

In today’s episode of #MyOfficeAndOtherAnimals… #Sheroo claimed the outer office before #GudduBilla arrived. And then it was a waiting game to see who would win… For another view of this ‘drama’ and another soundtrack, head to my stories.
Rainy Saturday in my city…
#MuseumTreasures 3
Just arrived !