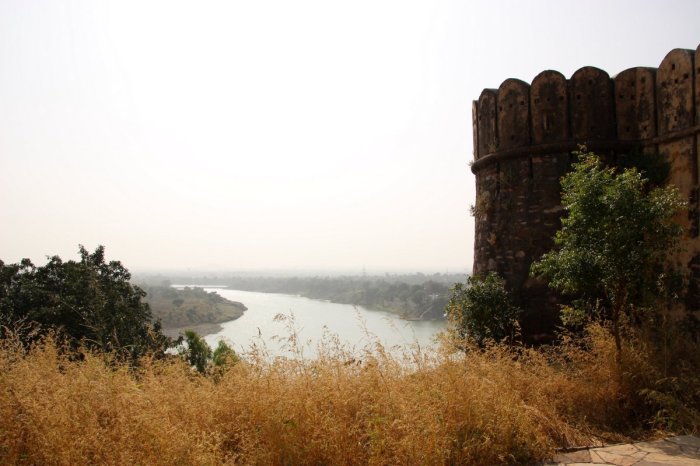 It is about half past three in the afternoon and my friend Niti and I have been walking through and exploring the UNESCO World Heritage Site of Gagron Fort at Jhalawar, Rajasthan. We have been at the Fort for the last 2 hours or so and leisurely exploration has been all about trying to understand the Fort’s layout, extent and get a feel of its past.

We take paths leading off tantalisingly into various parts of the Fort. We stop regularly to peer into what looks like half-finished structures, but realise that they are attempts to ‘renovate/restore’ them. We peer over the massive fort walls and rear back in alarm at the sheer drop. We also notice the fascinating rock formations around and see the river flowing silently by.

All through this, we have no clue as to what we are seeing for there are no signboards to indicate where we are within the Fort or what we are seeing. Niti and I have fun speculating what each building could have been — armoury, palace, stables, public hall, temple, etc. But the November afternoon sun is harsh and we are beginning to tire.

We almost decide to turn back when we see steps leading to a doorway in the fort wall and decide to explore that and before heading back. 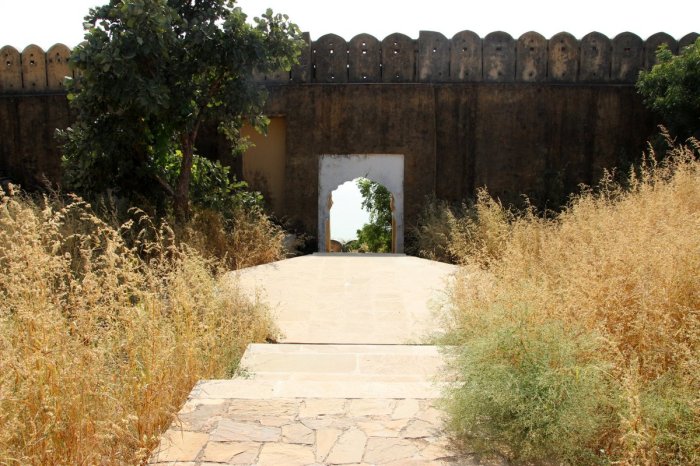 END_OF_DOCUMENT_TOKEN_TO_BE_REPLACED

It’s a hot and dusty day in February and the mid-day sun is relentless as is the perspiration that trickles down my back. And yet, I feel cold and shiver as if some one has walked over my grave.

I am at Chittorgarh Fort, the erstwhile capital of Mewar, and at the site that was once the cremation ground for members of the royal family. The site is also known as the Mahasati Sthal as this is where widowed queens would commit sati. According to the guide, from the vast quantities of ash found at this site, this is also where at least one of the three jauhars — ritualistic mass suicide through immolation committed by women and their young children in the face of certain defeat to Muslim invaders — that Chittorgarh Fort has witnessed happened.

Death before dishonour is a code that all Rajputs — men and women — lived by. While for men this meant dying in battle; for women, this translated into jauhar instead of being captured by the Muslim invaders. Available literature and ballads say that as the jauhar ritual began, the men would dress up in saffron clothes and ride out to fight their final battle and into certain death.

I feel an immense degree of sadness mixed with revulsion as I listen to the guide describing the jauhars. Though my eyes close automatically as if to keep out the horror, my mind conjures of images of this description and devastation. I try to recollect my day at the Fort in an attempt to divert my mind.

END_OF_DOCUMENT_TOKEN_TO_BE_REPLACED

It is a cool and crisp February morning at the Kumbhalgarh Fort.

The mild warmth of the winter sun and a gentle breeze make it the perfect weather for exploring it, and the mesmerising panoramic vista tempts me to stop now and then and admire the view. The blue haze of the distant mountain ranges, birdsong and the ringing of bells from the various temples within the Fort complex adds to the general sense of peace and calm all around. 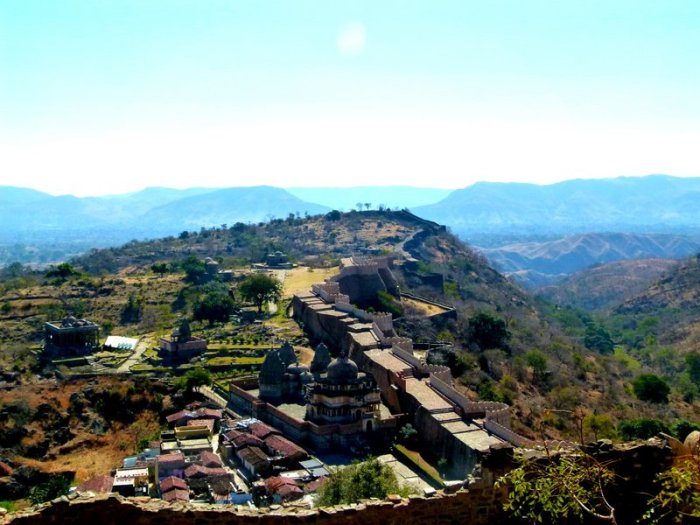 Though there is some activity in the settlement below and few early bird tourists like me, it feels like the Kumbhalgarh Fort is all mine, and only mine, to explore. As I stop at one point to look at the view once again, I recall how different the Fort looked the previous evening, when I attended the sound and light show.

The sun was setting when I had arrived at the Kumbhalgarh Fort. I had just enough time to buy the ticket, reach the venue, find a seat and switch off my mobile, when the show began with the rather clichéd, but oh-so-effective, voice-over saying, “Main Kumbhalgarh hoon” [I am Kumbhalgarh], setting the tone for the narration of the story of Kumbhalgarh Fort.

END_OF_DOCUMENT_TOKEN_TO_BE_REPLACED 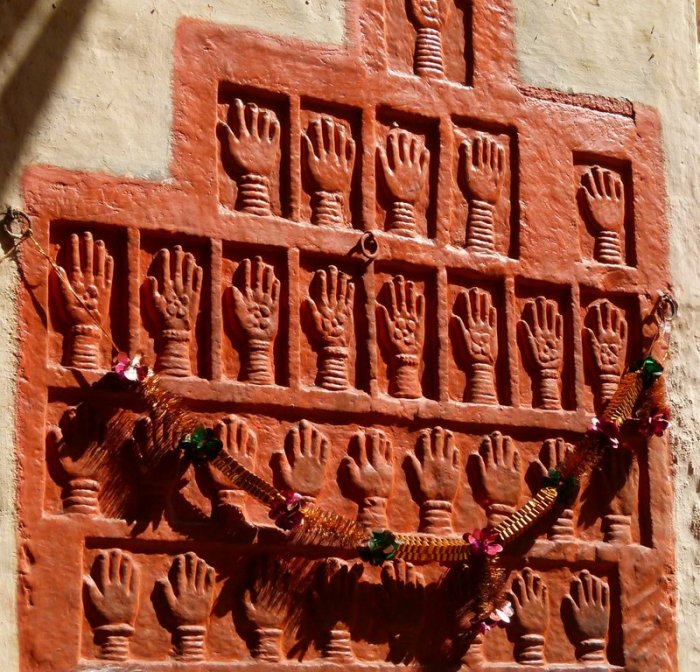 The story of the Mehrangarh Fort of Jodhpur begins with a curse.

There was once a King and like all self-respecting kings of his time, he wanted a grand and imposing fort at an impressive location. One day, he came across the location of his dreams — an isolated hill. The King ordered his men to immediately clear the hill of inhabitants and lay the foundations for the construction of the fort.

Only one man lived on the hill — a man considered holy by the local people around and known as Chidiyawale Baba. He was called thus as he took care of birds and fed them and spoke to them. Chidiyawale Baba was so furious at being evicted from the hill that he cursed the King with recurrent drought in his kingdom. Shaken and now contrite, the King went to Chidiyawale Baba to ask for forgiveness and to request him to cancel the curse. The Baba said that words once uttered could not be taken back, but the effect of the curse could be reversed if a selfless sacrifice was offered. In other words, someone had to volunteer to die by being buried alive on the hill.

The King came away dejected as he did not think anyone would volunteer. But that very evening, a man by the name of Rajaram Meghwal presented himself before the King and volunteered for the deed. A relieved (and, I’m sure, delighted) King accepted and on an auspicious day and time and at an auspicious site on the hill, Meghwal was buried alive. Rao Jodha, the King, then laid the foundation to building the Mehrangarh Fort in 1459.

END_OF_DOCUMENT_TOKEN_TO_BE_REPLACED

“I don’t think it looks like an arrow-head,” said the man.

“Well, the audio guide says that it is in the shape of an arrow-head. The guide-book also says so. Maybe we are missing something, “said the woman.

I came upon this couple and their discussion at a courtyard in the palace of Jaisalmer Fort.

As we nodded and smiled at each other, the woman asked me: “So do you think THIS is shaped like an arrow-head?” “THIS” was a model of the Jaisalmer Fort (see the photograph above left).

“I think it looks more like the map of India from where I stand,” I said.

“Ah ! That’s why it looked so familiar,” exclaimed the man. “Well, arrow-head, or map of India, or some other shape, it’s a beautiful fort, isn’t it?”

Now beautiful is not a word I would normally use to describe a fort. But, somehow, this word is very apt for describing Jaisalmer Fort. Built entirely of golden-yellow Jaisalmer stone, the fort is at its beautiful best during sunrise and sunset and can be seen for miles around. It rises like a golden mirage when one is approaching Jaisalmer by road, and at the same time also appears to blend into the desert surrounding it. In other words, it is rather hard to ignore Jaisalmer Fort.

END_OF_DOCUMENT_TOKEN_TO_BE_REPLACED

It was about 10.30 in the morning and vehicles were depositing tourists outside Bikaner’s Junagarh Fort. As I walked up to the Fort’s entrance, I overheard these comments:

“This is no fort. It looks more like a walled palace.”

“And why is it called Junagarh Fort? Junagadh is in Gujarat. Shouldn’t this be called Bikaner Fort or something?”

“Are you sure we are at the right place? Is this the only fort in Bikaner?

Now, if I had also been deposited outside the Fort in question like these people and was seeing the Fort for the first time, it is quite possible that I might have asked some of the questions myself. But since I had the opportunity to see the Fort from my hotel terrace the previous evening (see photo below), I knew that though it was not on a hill, it was a proper fort alright with a moat and all other fortifications befitting one.

I could also see Bikaner’s flat landscape from the terrace, which indicated that the builders of the fort had no choice in the terrain. And, yes, I could also see that this was the only fort around. The only answer that the view of the Junagarh Fort from the hotel terrace did not give was why it was called so.

I hoped that a tour of the Fort complex would answer questions for all of us.