“I don’t think it looks like an arrow-head,” said the man.

“Well, the audio guide says that it is in the shape of an arrow-head. The guide-book also says so. Maybe we are missing something, “said the woman.

I came upon this couple and their discussion at a courtyard in the palace of Jaisalmer Fort.

As we nodded and smiled at each other, the woman asked me: “So do you think THIS is shaped like an arrow-head?” “THIS” was a model of the Jaisalmer Fort (see the photograph above left).

“I think it looks more like the map of India from where I stand,” I said.

“Ah ! That’s why it looked so familiar,” exclaimed the man. “Well, arrow-head, or map of India, or some other shape, it’s a beautiful fort, isn’t it?”

Now beautiful is not a word I would normally use to describe a fort. But, somehow, this word is very apt for describing Jaisalmer Fort. Built entirely of golden-yellow Jaisalmer stone, the fort is at its beautiful best during sunrise and sunset and can be seen for miles around. It rises like a golden mirage when one is approaching Jaisalmer by road, and at the same time also appears to blend into the desert surrounding it. In other words, it is rather hard to ignore Jaisalmer Fort.

A search for a safer and defensible location for a new capital led the Bhatti rulers to Trikuta Hill about 30 km away and construction of the Jaisalmer Fort began in 1196. The Fort took 7 years to complete, and subsequent rulers kept making additions and alterations to it. With a length of over a kilometre, a circumference wall of 5 km, a 2–3 m thick fortification wall, 99 bastions, a retaining wall at the base of the Trikuta Hill, and a stone barricade ringing the hilltop, the Jaisalmer Fort has a good defense system in place. The information board at the entrance to the Fort says that “the main fort has two walls running parallel with a gap of 3–4 m to enable movement of troops”.

I visited Jaisalmer Fort on a cold and windy February morning. It had rained the previous night with the result that everything looked freshly washed and the golden-yellow stone of the Fort was practically glowing in the light of a mellow winter sun. My visit also coincided with the first day of the Jaisalmer Desert Festival and I entered the first of the many gates that lead into the Fort to see an explosion of colour. The Gopa Chowk, which is just beyond the first gate, was full of tourists and locals, folk musicians, shopkeepers setting up their wares, photographers jostling for space and that perfect frame to capture… And in the midst of all this buzz waited the colourfully decked-up camels and their riders for the festivities to begin. 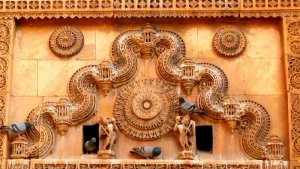 Golden-yellow stone towers provided the perfect backdrop to showcase the reds, yellows, oranges, and pinks surrounding me, and were enticing enough for me to miss the inauguration ceremony and get a move on exploring the Fort. So, after some time at the Gopa Chowk, I continued forth on the paved passages that led into the Fort through massive gates with intricately carved entrances, past internet cafes, more shopkeepers, cows and dogs to arrive at the Dussera Chowk or the Central Square. This square is probably the most important public space in the Fort and narrow lanes lead from here to various parts of the Fort.

I get my first glimpse of the Rajmahal or the erstwhile royal residence and am surprised to see how simple a structure it is. It is neither as grand as the havelis of Jaisalmer nor is it particularly distinguishable from the other buildings surrounding it. If it were not for a sign stating “Jaisalmer Fort Palace Museum & Heritage Centre”, I would probably have missed it altogether. But then, it is also equally possible that the saffron handprints of the royal women who had committed sati would have eventually drawn me to the palace entrance.

The former royal residence is a 7-storey structure built over many generations. It is actually a complex of many buildings, which are connected by low and narrow passages.

A tour of the Rajmahal reveals that though its interiors are not as grand as the palace in Bikaner’s Junagarh Fort, it is still pretty impressive. Among the many exhibits there, I particularly liked the silver coronation throne, the room with European wall tiles, and some breathtaking views of Jaisalmer from the highest point in the Rajmahal.

Jaisalmer Fort is actually a fort city with people still living within its walls. Though it is not the only fort-city in the country or the world, it is definitely among the most beautiful. I had a great time exploring the lanes and by-lanes of the Fort after the visit to the Rajmahal. The Jain temples whose spires I had seen from the Rajmahal was where I went to next.

There are 7 Jain temples within the walls of Jaisalmer Fort and like every other structure in the city is built from the same golden-yellow Jaisalmeri stone. All these temples were built in the 15th–16th centuries and are dedicated to different Tirthankaras: Parsvanath, Sambhavanath, Chandrapraphu, Rishabhadeva, Shitalnath, Shantinath and Kunthanath.  Though all the temples are beautifully carved, the stunningly impressive entrance toran to the Parsvanath temple deserves a special mention here.

Traditional architecture, roadside shrines, veiled women, absence of a sense of urgency, cows and dogs, bird calls, people sitting and chatting in squares, the silence that comes from absence of motorised vehicles — all contributed to the feeling of time travel to a couple of centuries ago. It was only the presence of hotels and guest houses advertising free WiFi, stunning views, apple pies, roof-top views and what not, and the occasional presence of two wheelers, that stopped me from actually doing so ! 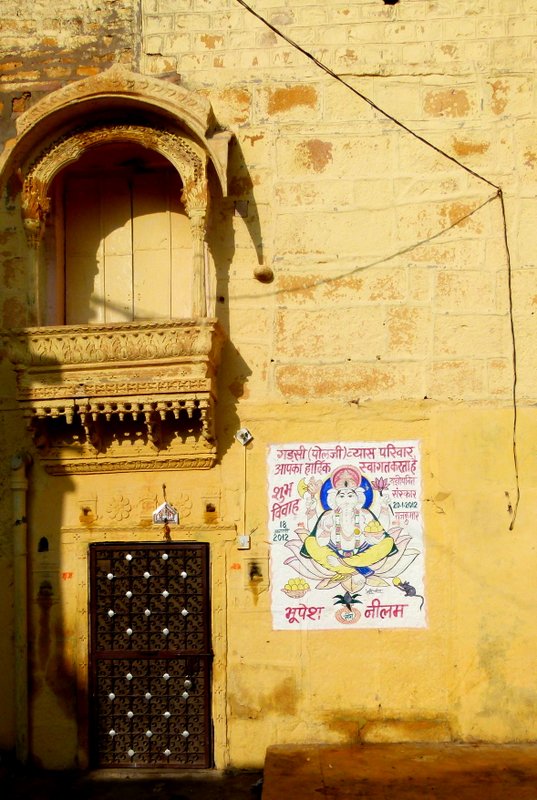 ut all the beauty, charm and period atmosphere of the golden fort of Jaisalmer cannot hide an important truth — Jaisalmer Fort is falling to pieces due to natural and human-made causes.

Though major restoration work and repairs have been and are being carried out, it is not enough to deal with the damage from water seepage and inadequate civic amenities. Portions of the retaining wall are simply giving away and I saw what looked like large cracks running along the length of the Fort as well. Though seismic activity in the region has weakened the foundations of the Fort, the demands made by the growing population and high tourist footfall is equally if not more responsible.

Jaisalmer survives on its tourist-based economy and every local is connected in some way or the other with tourism. For most people living within the Fort walls, it has meant opening up their houses or portions of their houses during the tourist season or even converting their houses into hotels. Then there are eating places that have opened all over the Fort to cater to the tourists. This has led to a Fort meant for 1,000-odd residents housing 3000 residents at any given point. These numbers increase by the hundreds during peak tourist season putting pressure on the existing amenities in the Fort.

For some years now, there have been talks of shifting the residents from the Fort or at least not allowing tourists to stay within the Fort premises. Both options have been met with stiff opposition by the residents as it would mean loss of home and for some loss of income as well. It is really a Catch-22 situation at the moment. 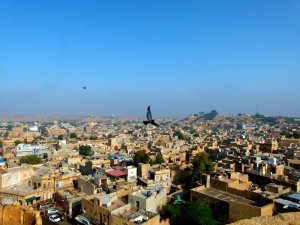 Initially, I was disappointed when I found that my hotel was located outside the Fort premises. I had read about and heard of accounts from friends who had stayed in a hotel within the Fort complex.

I was really looking forward to spending a night or two in a hotel in the Fort and have my morning cuppa at a jharokha, look out into a view like the photo on the left, see the sun rise (or set), see the city bathed in moonlight …

But now, I am very happy and relieved that my romantic vision did not happen and I did not contribute towards the decay that is slowly destroying the Jaisalmer Fort. You may ask, what difference would my not having stayed inside the Fort have made? Maybe not much in immediate sense. But I believe that everybody contributes in some way or other little by little. And this was mine 🙂

62 thoughts on “Forts of Rajasthan – 2: The golden fort of Jaisalmer”