There I was travelling in a Harbour Line local train that hot April afternoon.

I had just woken up from a short nap when the train halted at Cotton Green station. I was still drowsy when the train crossed the beautiful drinking water fountain (that I always look out for whenever I travel by train on this route) just before Reay Road station. I noted that the water fountain was there, a little more decrepit than ever before, a little more lonelier and a… wait a minute… what was the flash of colour on the wall behind the fountain? It looked like graffiti, but I couldn’t be sure.The train had already crossed that patch and was slowing down for its Reay Road station halt.

A week later, I was back on the train travelling the same route at round the same time. This time I did not sleep. And this time I saw that my guess was right. There was not just one wall with graffiti, but what looked like a lot of them. My first impulse was to get off the train and explore the area immediately. But the deserted area, run-down buildings and a general sense of unease at going alone made me postpone the visit to another day and with company.

So a month later, I was back on the train and this time alighted at Reay Road station to wait for Rushikesh Kulkarni, a fellow blogger, the guy who runs Breakfree Journeys, and the guy who very readily agreed to explore the area with me. 🙂 A short walk from the station and I was looking at the first of the many works of art I saw that afternoon at Reay Road.

Just outside the eastern side of Reay Road Station are godowns or warehouses of the Food Corporation of India, which are no longer in use. Many of them have been leased out to other companies, and the ones that have not been leased out have fallen into ruin or disrepair. And this is where the artwork can be found — both inside and outside the warehouse ruins. Presenting some of the more interesting ones here…

Step into my warehouse… Part 1

This graffiti just crackles with energy… 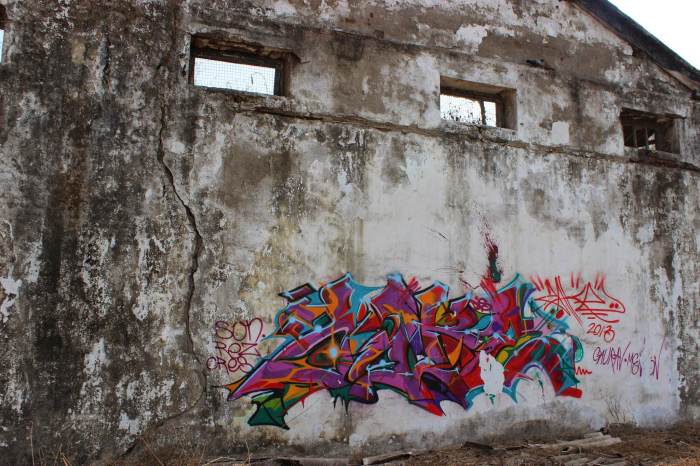 I am a short-sighted aerosol can !

Yellow and blue have never looked so cool together !

We know just how to brighten up a dreary old wall… 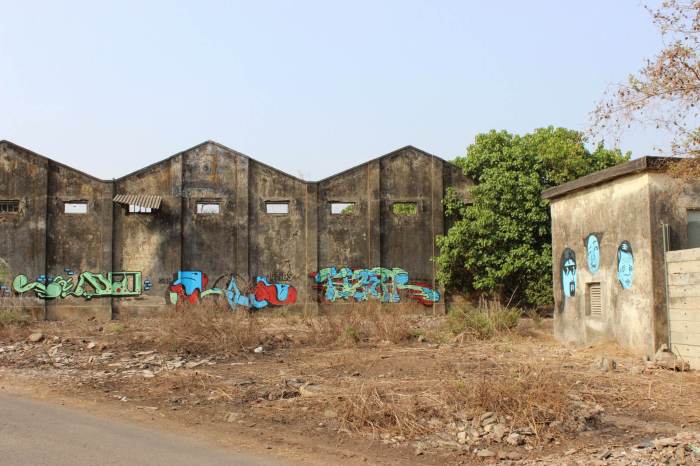 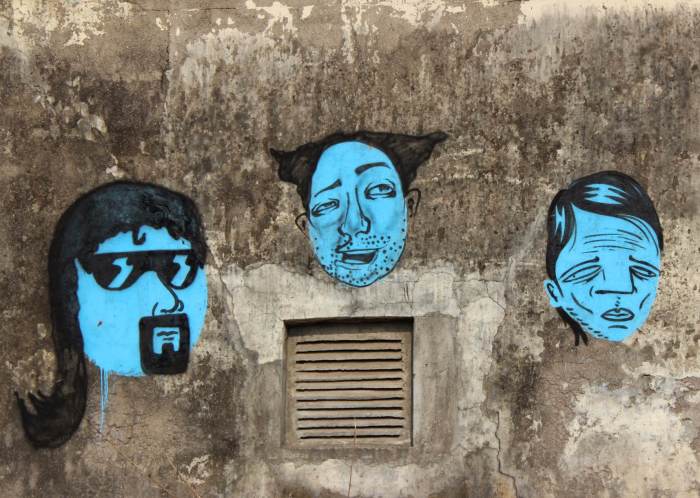 It took us about an hour to cover the entire area and see the artwork which clearly appears to be the work of many artists. While some are signed, some are not and still others had indecipherable scrawls. The theme of the artwork ranged from the whimsical to the downright edgy. What was also evident was the presence of older artwork under the current ones. This led me to wonder as to just how long had street art been active in the Reay Road area.

When I had visited the drinking water fountain in February 2011, the place was not as run down as it is today and had no graffiti. When Rushikesh asked the few people we met about who had done the artwork, the answers ranged from “students” to “foreigners” to non-committal shrugs. As for when they were done, the answers ranged from “1 year back” to “1 month back” to, you guessed it, non-committal shrugs!

If one goes by the popular understanding of street art as an unsanctioned form of art in non-traditional and public spaces, the ones at Reay Road would be perfect examples. I’m only surprised at not having come across much about these works of art in the media, unlike the street art in Bandra, which have been very well documented.

I love seeing this side of my city and the unusual places that street art keeps popping up. The impermanence of this art makes finding them and viewing them all the more special and fascinating — if you notice carefully, some of them are already fading and peeling away. With the monsoons in Mumbai in full force, I wonder how many of these works of art will survive the season. Or maybe there will be new ones to see by the end of the year.

Either way, it is a happy thought 🙂

Update (as on 23/7/2-14 at 11.52 pm) : I came across this video on the Graffiti in India website, where different graffiti artists talk about the graffiti scene. The interesting thing is the setting for these is the Reay Road artwork. See it for yourself 🙂

More Street Art from Mumbai: The writing on the wall | Nagrana Lane’s secrets | Bollywood on the walls | A fantasy world at Chapel Road | The St+art invasion of Bandra and a curated walk | Street art @ Reay Road