The painting is called “Bacchus and Ariadne”. It was painted by Titian sometime between 1520 and 1523. It depicts a tale from Roman  mythology where Bacchus (the God of Wine) sees the mortal Ariadne and falls in love with her at first sight. He is so smitten that he jumps out of his cheetah-drawn chariot towards her. The painting has captured Bacchus in mid-leap as Ariadne shies away from him in alarm.

I saw this painting at London’s National Gallery in 2009. I duly noted the story that the painting conveyed, the various characters in it, the lovingly painted animals, Titian’s trademark use of bright colours… and moved on to the next artwork. It was a nice painting, but not particularly impressive. Or so I thought. Today, I bitterly regret at only looking at the painting, but not seeing it closely enough. In only looking at the painting, I had completely failed to see the colours themselves, particularly the brilliant blue of the sky — a blue which came from the ultramarine paint made from the semi-precious lapis lazuli mined hundreds of miles away in the Sar-e-Sang valley (in present day Afghanistan). 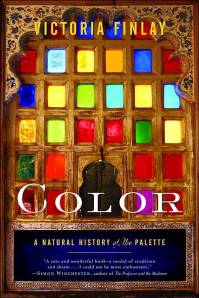 I read about all this and much more in Colour: A Natural History of the Palette (2004, Random House, pp.448) by Victoria Finlay. The book can be considered as a travelogue; it can also be considered as a book on art history. But for me, it is a book on the micro-history of colour as explored through an artist’s paintbox holding the colours of the rainbow and then some more — violet (or purple), indigo, blue, green, yellow, orange, red, ochre, white, black and brown.

In her attempt to trace and draw out the stories of how natural dyes, paints and colours were made for a European artist’s paintbox, Finlay travelled to Australia, England, China, Chile, Italy, India, Iran, Spain, Afghanistan and Lebanon. As each story, myth, legend of the colours come into life, we realise that:

END_OF_DOCUMENT_TOKEN_TO_BE_REPLACED

Recently, Anu Shankar of A Wandering Mind tagged me in the Capture the Colour contest organised by TravelSupermarket.com. The contest brief is, well, quite brief and simple:

… to publish a blog post with a photo that captures the following 5 colours – Blue, Green, Yellow, White and Red.

Hmmm… till about 4 years back I didn’t even give colours a second thought or glance. I took it for granted as growing up in India, they were always around me. But a year’s stay in London showed me how much colours mattered to me, and changed my very perception and understanding of colours.

I arrived in London at the onset of winter and its (in)famous winter weather. But the grey and damp weather didn’t bother me; neither did the sunless days affect me. But a monochromatic London of black and grey coats, hats, scarves, gloves and boots drove me crazy. That’s when I started noticing colours in the world around me, rather than only on people. Colourful shop fronts, buildings, pub exteriors, cars, tube stations, a stained glass window … took on a whole new meaning. I learnt to look at, appreciate and enjoy colours in a very different way.

It had to convince myself to participate in the contest as I don’t really consider myself as a photographer. But the idea of digging into my digital photo library was tempting and I had a great time choosing 5 of them—one for each contest colour. So presenting my blue, green, yellow, red and white photographs as well as my take on each of them. END_OF_DOCUMENT_TOKEN_TO_BE_REPLACED

#MuseumTreasures 20
My neivedayam for Dussehra today !
Appa always gifted me a book for Navratri or gave me money to buy one of my choice. The book would be handed over to me on Navami day of Navratri or the day we had the Saraswati Pooja. After he passed away in 2011, I continued the tradition of gifting myself a book in his name.
#MuseumTreasures 19