The Guest Post Series on “My Favourite Things” has contributions by those sharing my interests in travel, books, music, and on issues that I am passionate about. These posts are not always by fellow bloggers, and the guest authors are always those who have interesting experiences to share.

Today’s guest post is by Srinayan, the infrequent blogger of The Random Walkaround. An engineer by profession, he took up blogging a little over a year ago and writes on many topics, but always with sensitive insight and understated humour. Srinayan, however, prefers to be known as a lethargic blogger who is long on intent, but somehow falls short on delivery. That is probably why I have given up on waiting for an original guest post from him and, instead, am re-posting one of his old posts. A post that I liked very much, and a post that is quite relevant for our times.

We are living in a terrible world and doomsday is just around the corner; or so we are led to believe by television, newspapers, the internet and all other oracles of wisdom. Nothing seems to going to right for humanity—Greece, the Euro crisis, Wall Street, US debt, climate change, rogue states, etc. Closer home we have inflation, falling stock markets, the Lokpal Bill, 2G and scams of every kind and size. The list is ever growing; you only have to add your pet angst to it.

Whatever happened to that wonderful therapeutic called humour? I don’t mean the stand up comic type which is in vogue today; rather, the sly poke in the ribs that reminds us that, even if all is not well with the world, we are doing fine and having a good laugh about it. 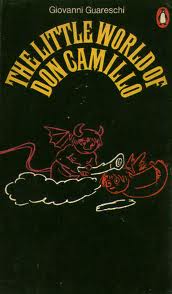 Welcome to The Little World of Don Camillo.

In the context of its time, post-World War II Europe was just as insecure and dangerous as the world is today. While the common folk grappled with economic hardship, their political leadership was preoccupied with ideological realignments or preventing them. As a farcical consequence, depending on your leanings, all problems owed their roots to communism or opposition to it. Black couldn’t get blacker and white, whiter.

The absurdity of the situation was too much for an Italian called Giovanni Guareschi. He reacted by creating two characters, a priest named Don Camillo and his communist adversary, Peppone, in a village in the Po river valley in Northern Italy. The battle between the proletariat and the bourgeoisie was truly joined and the several comic confrontation between the two reflected the pointlessness of the discourse of the time.

… in Parma near the Po River; people born in this area have heads as hard as pig iron…My parents had decided that I should become a naval engineer and so I ended up studying law and thus, in a short time, I became famous as a signboard artist and caricaturist.”

As if this was not enough, life had a lot more in store for him. He wrote,

For reasons entirely beyond my control, the war broke out… Since I did not want to work for the Germans; I was sent to … various concentration camps… I had to do everything to stay alive and succeeded almost completely by dedicating myself to a precise programme which is summarized in my slogan ‘I will not die even they kill me’. (It is not easy to remain alive when one is reduced to sack of bones of which the total weight is one hundred pounds, and this includes lice, bedbugs, fleas, hunger, and melancholy).

One must read the Don Camillo stories to appreciate the delicious farce of the battles between faith and ideology. Both Don Camillo and Peppone are  rigid in their beliefs and do not hesitate to use their fists to make their points. But

… one man beats the other over the head, but fairly – that is, without hatred – and that in the end the two enemies find they agree about the essentials.”

Christ is Don Camillo’s conscience keper and the two often converse and argue. But His control over the priest’s temper is tenuous. In one story the Lord restrains Don Camillo saying that “…your hands were made for blessing, not for striking.” In response, Don Camillo made the rather fine point that the Lord said nothing about the use of  feet and proceeded to give his adversary a powerful kick in the behind. But the Lord is even-handed in his dispensations. When Don Camillo refused to  baptise Peppone’s infant son (I’m thinking of the reputation of Paradise, Don Camillo claimed), Christ was annoyed.

The reputation of Paradise is my business, He shouted angrily. ‘What matters to me is that a man should be a decent fellow and I care less than nothing whether his name be Lenin or Button.

Though they would not admit to it, both men needed each other. In one story, the communists petition the Bishop to transfer Don Camillo from the village because of his “his provocative and dictatorial poses”. Peppone misses him almost immediately on Don Camillo’s departure and loses no time in leading another group to the same Bishop with a demand to get him back and threatened that

…until our regular parish priest returns to us, not a soul will enter the church.

Giovanni Guareschi is unapologetic about his characters.

For reasons beyond our control, the world has got to where it is now. We take our experts — politicians, stock brokers, bankers and the like — far too seriously. In the general atmosphere of gloom, they appear to be only ones with carefree smiles on their faces. And why not, if they are being paid handsomely just to remind us, day in and day out, of our miserable condition?

The time is just right to shut our ears to the din and stop taking ourselves seriously. Don Camillo and Peppone can teach us how. Along the way, we might also realise the foolishness of taking extreme positions.

32 thoughts on “Let’s have some humour, please”