The London Docklands is the name given to some areas of eastern and south-eastern London. Till the middle of the 20th century, the Docklands was where the various docks and dockyards used to be. Though the docks were originally built and managed by a number of private companies (for example, East India, West India, etc.), it was not till 1909 that it all came under the management of the Port of London Authority.

Today, the area is a mix of the commercial and the residential, and old housing estates and newer steel and glass structures as a result of massive efforts at redevelopment of an area that used to be predominantly labour class. The introduction of the Docklands Light Railway or DLR in 1987 fulled the development of an area that did not have good transport connectivity. The Docklands area has always been a trade hub for centuries; today, it is a hub of a different kind—the central business district of London is located here.

The DLR is a fully automated light metro or light rail system to exclusively serve the Docklands area of London. It is quite distinct from the London Underground, and is also part of Transport for London. During my year’s stay in London in 2008–2009, I remained ignorant of the DLR largely because the Tube Bus took care of most of my travel requirements and I rarely travelled to the Docklands area.

Then one day, while returning to Central London from a day trip to Greenwich, the DLR turned out to be the most convenient mode of travel, and to use a clichéd term, travel was never the same again. It is a trip that I still remember, as a very different London emerged through that journey, very distinct from the Victorian and Georgian London that I had come to associate London with and love.

Such was my fascination for the DLR, that on one rainy and cloudy day, I spent a few hours travelling by the DLR, getting off at stations that caught my fancy and exploring the Docklands area on foot. I saw a very different London that day. A quieter London, steel and glass apartments, residences converted from warehouses, an airport by the river, colourful buildings, and so much more.

Presenting a sampling from that lovely day of a very different London courtesy the DLR journey that I took in July 2009 ! 🙂

END_OF_DOCUMENT_TOKEN_TO_BE_REPLACED

So Anna Hazare and Team Anna are back with their fight against corruption in India and to ensure the implementation of the Lokpal Bill. There are mixed reports in the media about the success of this round of agitation, as none of the expected fasting, sloganeering, jail bharos, allegations, counter allegations, etc., etc, has really taken off. It the reports are to be believed then it appears that the movement has lost momentum as well as direction this time around.

I feel that part of the reason for the Anna juggernaut not sustaining is due to their simplistic understanding of corruption. Today, corruption is no longer only about those who take bribes; it is also about those who give bribes. Corruption is not only financial; it is moral, ethical, ecological, societal, ideological, creative… It is not only the politicians and the bureaucracy who are corrupt; society itself has become corrupt.

Corruption no longer has a simple definition; today, it is highly contextualised, complex, layered and subjective. What one person perceives as corruption can be another person’s “legitimate” way of securing his/her future! Take the case of a person who bribes his or her way to a lucrative posting within the organisation he/she works for. This is done with the understanding that the returns are worth the bribe paid. Think Customs, the Mumbai Octroi, the RTO… and you’ll know what I mean.

Corruption is so endemic and blatant that we have taken it for granted in a matter-of-fact way. Regrettably, the discourse on corruption in India rarely reflects its subjective understanding or its diversity or its depth or its endemic nature. Mostly, we get to read dry and technical analyses full of academic jargon, tables and figures and how India is being bled dry economically. Most of the articles are dramatic exposes intended to shock and titillate, but which ignore the deeper malaise that grips our society. Though some of these articles go into the reasons behind the corruption, very rarely does it take a mirror to the society we inhabit and present the different faces of the corrupt Indian.

END_OF_DOCUMENT_TOKEN_TO_BE_REPLACED

Do you ever have a song, an idea, a storyline, or an image stuck in your head? And it just refuses to go away? For some time at least? I have this with music—it could be a song, an instrumental piece, a jingle, etc. This becomes my “now’”song, and the “nowness”  (pardon my English here) could be for any length of time.

I am in a sentimental mood these days. My niece spent a few days with us last week. This stay was very significant as she begins college next week and won’t be able to spend time with us for some time. We had a lovely time together — saw a movie, shopped for some “college wear” clothes for her, ate ice cream and donuts, watched silly TV serials and laughed ourselves sillier … We also talked a lot about everything and nothing in particular.

One of the things we spoke about was the angaai (the Marathi word for a lullaby). And I was reminded of “Nimbonichya zadamage…”, a very popular angaai or lullaby from the Marathi film Bala gau kashi angaai. Sung by Suman Kalyanpur, this lullaby is picturised on Asha Kale, as she sings it to her niece in the film.

I used to sing this lullaby to my niece, especially when she would stubbornly refuse to go to sleep. I can’t say that the angaai succeeded, but I would like to believe that my she liked it then. Even after all these years, my dear niece still does not sleep easily, and definitely would not appreciate an angaai today. But she did not mind when I sang a few lines of that song to her last week !

It’s a song that reminds me, that she’s all grown up (well, almost !), and entering an exciting phase of her life. It’s a song that has a lot of sentiments attached to it. And it’s a song that I’m still singing, as it has become my “now” song. 🙂

The back of my neck prickled, and an uneasy shiver ran down my spine. I looked around and could see nothing unusual or scary. It was a bright sunny afternoon at the Badami Caves and our tour group was gathered around the guide at Cave Temple 1. There was nothing unusual or strange or eerie there.

Yet, the feeling of being watched persisted and I just could not relax. I still don’t know what made me look up at the ceiling. And when I did look up this is what I saw.

Now, I do not have Ophidiophobia, but the huge carved snake on the ceiling gave me a scare. It looked so real that my first instinct was to run away; a couple of people in my tour group actually did leave the cave and walk away when the guide pointed it out to them. To me, it looked like the beautifully carved snake with the multi-hooded head was stretching out its hands towards me. I could not take a photograph right away and this one was taken only after I had visited all the other caves.

Even as I type out this post, I can remember that prickly feeling of unease. I actually looked up at the ceiling to check and found only the ceiling fan whirring away !

Have you come across such realistic looking sculptures during your travels? Do share them with me here. 🙂

Last week, I came face to face with the unsavoury and ugly side of blogging. I became the target of an orchestrated effort at harassment or cyber bullying because I dared to post an unflattering review of I, Rama: The Age of Seers by Ravi Venu. Among other things, I got accused of:

And oh ! I also got called a hot-shot blogger/writer/reviewer. But since the tone was sarcastic, I can safely assume that the commenter did not mean what she said. 🙂 But I am getting ahead of myself, and as with all narrations please allow me to begin at the beginning.

Last Tuesday, I woke up feeling a little sleep deprived and, therefore, grumpy. The reason? I had stayed up past midnight to to finish writing and posting my review of I, Rama. The book, in very polite terms, was not up to the mark and I had struggled to finish reading it, and then write its review. Of course, it would have been perfect if I did not have to write a review at all, but since I had received the book as part of the Blog Adda Book Review programme, I had to write one.

A shower, a mug of coffee and a hearty breakfast took care of the grumpiness, and soon I was on my way to work. My 30-minute commute had me mentally reviewing my workload for the day and think about the review that I had posted. But, once I reached office, it was only thoughts of work and with my usual cheerful frame of mind I settled down for a regular day at my workplace.

Come evening, I wasn’t feeling cheerful or even excited as I usually do on the day I publish a blog post. Instead, I was feeling bewildered and a more than a little upset. The “Charge of the Harassment Brigade” had struck.

END_OF_DOCUMENT_TOKEN_TO_BE_REPLACED 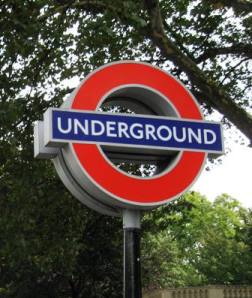 I lived in London for a year (2008–2009) and though walking was my preferred mode of getting around the city, it wasn’t always possible to walk to my destination. So that’s where the Tube or the London Underground came in as the fastest, though not necessarily the cheapest, mode of travel. Travelling by the Tube made me re-look at perceiving public transport as only a means to get from point A to point B. It showed me that it could also be a place to showcase art, make a design statement, and a place that reflected the ethos/culture of the area it serviced.

Transport for London is the company overlooks the public transport in London through the Tube, buses, the Docklands Light Railway (DLR), trams, trains, etc. Though I used all these modes at some point during my stay in London, I loved the Tube and the DLR the most. I loved it so much that I photographed the unique aspects of the various tube stations I passed through, its various lines and routes, escalator and tube etiquette, etc. I never tired of admiring the little and big things that made each station unique and special. Even today, the Tube remains eminently gush-worthy. 🙂

About 2-3 weeks back, BBC Entertainment channel in India started airing a programme on the London Underground. This programme, which airs every Saturday at 9.00 pm, looks at “London’s 140 year-old Underground system” and “what it’s like to run the world’s most complex train network”. In other words, it is a behind-the-scenes look at the people who run and manage the Tube.

Not surprisingly, this has become my favourite television programme and has inspired me to write this blog post today. But this post is not about the efficiency or a behind-the- scenes look of the Tube; it is simply a post on the beautiful tube stations of the London Underground — the ones that caught my eye with their unique design, art or architectural element.

So are you ready for some station hopping?