Popular perceptions are funny things, especially in art.. You don’t realise how deeply entrenched they are in your mind till you see something that is different. So much so that it forces you to re-look and re-imagine the perception in a new context. No matter how much of an open mind I keep and think I am aware of internalising popular perceptions, I am surprised every now and then. This blog post is about one such incident.

It had been a regular day — there was nothing special or extraordinary about it. Just one of those ordinary days. As I got off the bus from work that March evening, fond thoughts of spending the evening with some music, popcorn and books accompanied me as I walked home. As I passed the local vegetable market, I saw a large tableau set up by a local organisation, which depicted Lord Vishnu reclining on Sheshanag in his characteristic pose.

At first glance, the tableau looked normal and I would have passed it without a second glance if I hadn’t looked at the face. And that’s when I stopped ! 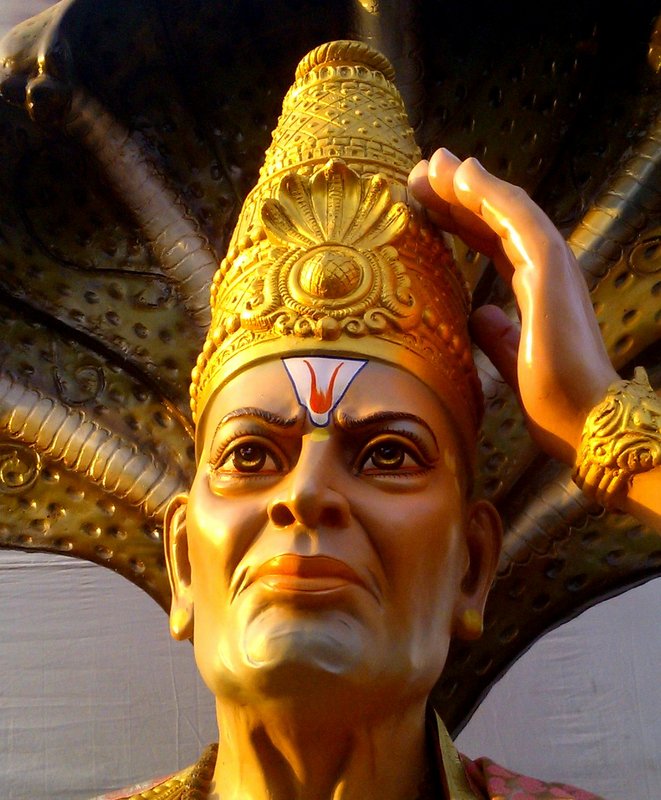 Vishnu was frowning and his face expressed a mixture of disdain and disgust. There seemed to be suppressed anger too on his face. And then I noticed the puffy eyes, a gaunt face and even a 5 o’ clock shadow on his chin. And that was not all. This Vishnu had a sagging chest and a paunch as well. The hand lifted in blessing looked perfunctory and more like “stay where you are”, or “stop right there”. As for the hand supporting his head, Vishnu looked liked he had a headache.

Popular art in the form of paintings or sculptures, and even literature depicts/describes Vishnu with a serene expression, and an all-knowing look, sometimes mischievous, sometimes playful. And he looks as perfect as a God is expected to be — no sagging chest, no paunch, no stubble. 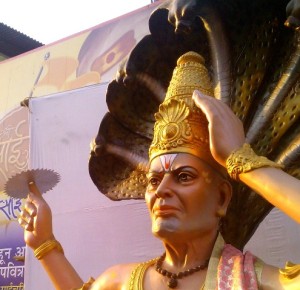 I was surprised and a little bit shocked as well when saw Vishnu in a such a different avatar. And my first thought was why did the artist represent him the way he did — like someone’s cranky old uncle or grandfather.

What was the artist thinking? What was going on in his mind?

Was this representation deliberate to make people stop and think?

Or was this the author’s own dismay at how society is today and what Vishnu as the Creator must be feeling at the state of his Creation?

Or was this the artist’s representation of Kalki, the last avatar of Vishnu who appears at the end of Kalyug?

Or was the artist disillusioned with God and religion?

PS: What do you think of Vishnu’s expression?

Update (September 3, 2013; 10.00 pm):
A blogger friend, Rushikesh Kulkarni, pointed out that the “Vishnu” in this post is not a manifestation of the artist’s imagination of this god. Instead, this is a representation of one of Maharashtra’s most famous saints, Swami Samarth, as Vishnu. Swami Samarth (also known as Akkalkot Swami Samarth) is considered to be an incarnation of Lord Dattatreya, has a large following in this state of India. Thank you, Rushikesh.