It is around 10.30 in the morning when I enter the Rani ni Vav (or the Queen’s Stepwell) complex at Patan. It’s a sunny day with bright blue and cloudless skies.

I take this as an auspicious sign for I have been rather unlucky when it comes to viewing stepwells. Be it at Hampi, Champaner or Lonar, the wells were full of water when I visited them, and I was unable to see the step-like feature of the wells. So keenly aware I am of my ‘luck’ with stepwells that I cannot help asking the person selling entry tickets to the monument, if there is water in the stepwell.

I get the reassuring reply that the water supply dried up a long time back and the step well is completely dry. So it is with a spring in my steps and a smile on my face that I enter the complex. Manicured lawns and well laid out pathways welcome me, and I pass a photo shoot, as well as coy couples hiding behind bushes on my way to the stepwell, which is a short walk from the entrance.

Soon the stepwell is visible or rather a fenced off rise and depression is visible and it is only when I am almost upon it that I see steps descending into the stepwell. I have picked up a booklet from the ticket office on the Rani ni Vav and settle down on the topmost step to read and familiarise myself with the history of the stepwell.

Patan was the capital of the Solanki or Chalukya dynasty of Gujarat. Situated on the banks of the river Saraswati, Patan was also known as Anahillapura or Anahillavada. The Rani ni Vav is not only one of the many monuments built by the Solanki rulers, but also its most famous.

Rani ni Vav is believed to have been constructed by Rani Udayamati, consort of the Solanki ruler, Bhimadev I (1022-1064 CE) in late 11th century as a memorial to him. At that time, digging wells and building stepwells in the memory of a loved one was a much prevalent tradition in a region with water scarcity and deep groundwater levels. Located near rivers, stepwells were named as so, as they had steps leading one directly to the underground water level. The earliest stepwells were simple structures, but over time evolved as a specialised form of architecture in the region. The Rani ni Vav can be considered as the zenith of that architectural form. 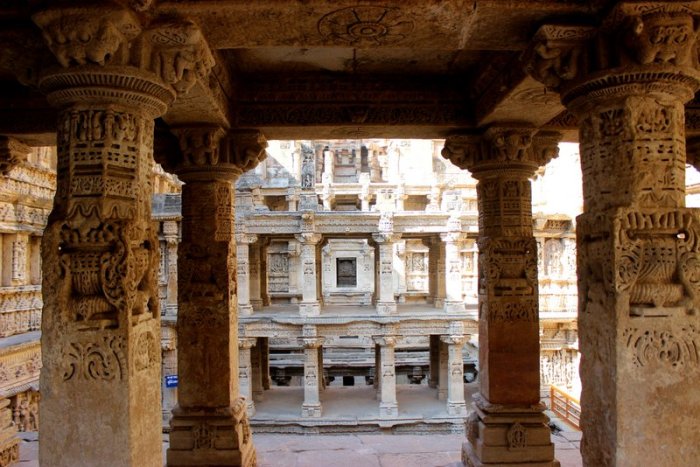 Rani ni Vav is one of the largest stepwells in Gujarat measuring over 65 m in length and 20 m in width. The well is 29 m deep with a diameter of 10 m at the top, which decreases as one descends deeper into the well. The stepwell’s entrance is from the east side with the well shat at its western end. What makes the Rani ni Vav spectacular is not its dimensions, but its richly sculpted walls and pillars.

The stepwell is seven storeys deep with terraces or pavilions at each level. Construction of the stepwell would have proceeded from top to bottom, with each level supported and bolstered with pillars before proceeding to the next level below. There were 292 pillars at the stepwell; only 226 remain today.

While sculpting the pavilions and walls, the reverse order was followed with the lowest levels completed before the upper levels. Look at the walls in the photograph below. You will notice that the wall niches in the lower levels are filled with sculptures while the upper wall niches are empty.

The Rani ni Vav was in ruins till the late 1950s, when the Archaeological Society of India took over and declared it as a monument of national heritage. At that time, the entire monument was silted and covered with debris with only the two ends visible. The conservation and renovation process took years and maintenance of the Rani ni Vav is still an ongoing process.

Looking at the stepwell from where I’m seated at the entrance, it is difficult to believe that the whole place was in ruins. But a ‘before’ picture, placed strategically at the entrance to the Rani ni Vav is proof of what the place looked like.

As I prepare to descend into the stepwell, I notice with disappointment that the step-like feature of the Rani ni Vav is not visible at all due to the pavilions and pillars. That disappointment, however, is forgotten when I come face to face with the first of the sculptures.

The sculptures are exquisite, each one more beautiful and more detailed than the next. The sculptures are everywhere — on the walls, on the pillars, large ones, small ones, of major deities and unknown (to me at least) figures — Brahma, Vishnu, Shiva, Parvati, nagakanyas, and others.

Sharing with you some of the sculptures that captured my attention that day.

Brahma. I don’t know why I get so excited when I see a sculpture of Brahma; perhaps because it is so rare to come across one?

The Mahisasuramardini sculpture was my favourite and each time I climbed up and down the stepwell to see some detail that I thought I had missed, I would stop to see this sculpture again.

From Vishnu’s Dashavatar (Clockwise from top left): Vamana and Rama; Balarama, Kalki, Varaha and Buddha. Balarama was the surprise as I had not expected to see this sculpture and that too one so easily recognisable with his plough. Also, this was the first time I saw Balarama in a sculptural form.

Geometrical patterns. At first these looked like random decorative motifs, but some of them looked familiar. That’s when I realised that these were the geometrical weaves of the Patola sarees, something that Patan has been famous for centuries. What a wonderful way to celebrate the local art and craft !

What I particularly liked about the sculptures were the expressions on the faces. Each one of them had been carved with care — steely gaze of a king, coy look of a maiden, steady gaze of a warrior, a sly look, a tender touch… the sculptures had it all. This was workmanship at its most exquisite.

I spend two very happy hours exploring the sculptures that I can see up close or through the zoom lens of my camera. When I come out of Rani ni Vav, I decide to walk to the western end to see the well shaft. As I walk towards the well shaft, the size of the stepwell is revealed, which is somehow not apparent when I descended. Or maybe, I just didn’t realise with all the sculptures.

When I reach the other end and position myself behind the well, I let out a whoop of delight, for now the step-like feature of the Rani ni Vav is visible, not fully because of the pavilions, but visible nevertheless. 🙂

The architectural marvel that is the Rani ni Vav is clearly visible from here, the western end. The size, the step-like feature, the pavilions, the sculpted pillars and walls, the well shaft and the depth are all visible from here. As I take in each of the details, I think of Rani  Udayamati and her team of builders and sculptors who made her grand vision for a stepwell as a memorial for her husband come true.

I can’t help thinking of the Taj Mahal and comparing it with Rani ni Vav — both architectural marvels, and both UNESCO World Heritage Sites. But the comparison is not on these points, but on the thoughts and processes that shaped both the monuments. The former, a world-famous monument, was built by a sorrowing emperor for his beloved wife using public money and almost bankrupting the empire in the process.The Taj was of no use to the public, whose money built it. The Rani ni Vav (which  is not that famous and probably never will be) was built by a grieving queen in the memory of her husband and for the public’s use. It is not clear where the money came from — the royal treasury or public money — but there are no records of it having bankrupted the kingdom. I know the comparison is not fair, but there you are for the thoughts come unbidden,

2014 was the year I dubbed as the year of travel drought. Well, almost. For various reasons, none of my travel plans worked out last year. None, except for the trip to North Gujarat in the second week of December. An overnight train from Mumbai got me to Mehsana, which was my base for exploring the region. Patan is about 40 km from Mehsana and a shared jeep ride got me there. A short rickshaw ride later, I was at the Rani ni Vav ready to end my travel drought. 😀

And what a perfect start it was to a wonderful holiday that unfolded. Do come back to read about the places that I visited and my experiences in the posts that will be published in the days to come.

26 thoughts on “Rani ni Vav: The queen of stepwells”