The gates to the Rudra Mahalaya Temple at Sidhpur are locked when I arrive just before 6 pm that December evening in 2014. Surrounded by modern-day residential houses, the centuries-old temple is deserted and looks like it is holding out against a seige.The twilight makes the temple, which is maintained by the Archaeological Survey of India, look lifeless as well. As I’m wondering what to do, a passerby stops to say, “Call out for the watchman. He’ll come and open the gate.”

I call out for the watchman and the driver of the auto-rickshaw I have hired also adds to my calls. Soon, I can see someone coming out of the temple and walking towards us.

“I want to see the temple,” I say, prepared to argue it out with him if he says something about closing times or anything else.

“Okay,” he says simply, pulling out a key bunch and deflating my ready arguments immediately. “Put your camera away. No photography allowed here.”

“Why not?” I ask, getting ready to argue again.

“Rules,” is the simple and frustrating answer.

I realise I have no choice in this matter and put away my camera. Only when I put away the camera and close my bag does the watchman open the gates and allow me inside. “You can take pictures from outside the gate, if you want to.” 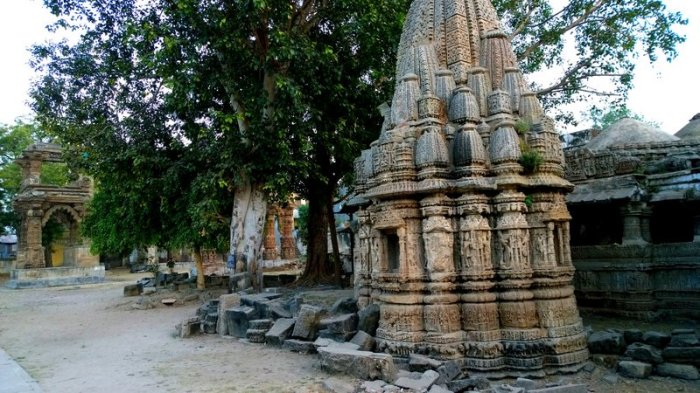 I just shrug and follow him inside and stop when I reach the temple. And stare at the sight in front of me.

In the “verandah” of the temple are two beds covered with mosquito netting. A clothes line is strung between two pillars of the temple and is almost sagging to the floor with the number of clothes hanging on them. There are a couple of suitcases in one corner, an earthen water pot, and a table piled with vessels and jars and boxes. I can’t see a stove, but I’m sure it’s there somewhere. All very domestic.

“Who lives here?” I ask the watchman, even though I can guess at the answer.

“We do,” he answers. “There are two of us and we take turns in guarding the property. We have to stay here as we have not been given any other accommodation.”

I don’t feel like entering the temple anymore as it seems like I’m entering someone’s private space. Instead, I decide to explore the compound whose condition isn’t much better with rubble, piles of stone waiting to be used in the repair and restoration of the temple… it is a depressing sight all around.

The auto rickshaw driver, who has accompanied me inside, sidles up to me and whispers, “Madam, take pictures and show the world what this temple is really like. I’ll keep a look out for the security guys.”

I don’t usually go against “No photography” rules, but I’m feeling a little rebellious and take 3 quick photos with my mobile camera, before I feel guilty and put it away.

The grand, towering toran, which would have been the entrance to the Rudra Mahalaya Temple.

Rubble and a carved slab of stone.

What this structure would have been is anybody’s guess !

I finish my ‘tour’ of the Rudra Mahalaya Temple within 15 minutes and leave after thanking the security guard. As he locks the gate behind me, I take pictures of the temple complex from outside, careful to avoid the chain link fence from appearing in the frame. In the dying light, I notice the tilted spire of the temple, the temporary solutions to close openings and of course, the carvings. I can’t see the details very clearly, but can still make out that they must have been exquisite. 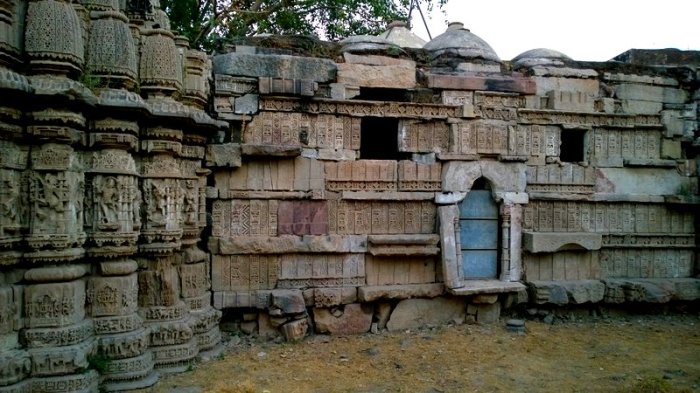 The Rudra Mahalaya is probably the oldest temple in Sidhpur. It was built by Siddhraj Jaisinh of the Solanki dynasty (and the same king who built the Sahastralinga Talav that I blogged about last week) in 12th century CE. According to the Gujarat Tourism website, the Rudra Mahalaya temple

… was an architectural wonder with a three-storeyed ‘shikhara’, 1600 pillars, 12 entrance doors… The eastern gate was adorned with beautifully carved ‘Toran’… The ornamentation of the temple was exuberant as shown by the elaborate and detailed carvings of the pillars and the beautiful Toran, which are the only remains of the temple today.

Traces of that wonder can be seen, but just about. It was the description of Rudra Mahalaya Temple that made me visit it. I wonder, if I would have visited it if the website had shared the true state that the temple is in.

And that brings me to the state of the two monuments built by Siddhraj — the Sahastralinga Talav at Patan and the Rudra Mahalaya in Siddhpur — both maintained by the ASI and having different standards for each. While the museum at the former is not open to the public for fear of the sculptures getting damaged, the Rudra Mahalaya Temple, while technically open, is almost a residence for the men who guard it.

The Rudra Mahalaya temple is already in a state of precarious ruin, and wouldn’t the guards staying there make it worse? Is providing security to a heritage monument synonymous with conservation? In an atmosphere where there are insistent and strident calls for Indian art treasures ‘looted’ by colonisers to be returned to the country, a ghar wapsi of sorts, I wonder what will the future for such artifacts be.

Locked up for fear of being damaged or out in the open to be used as a prop? 😦

27 thoughts on “The Rudra Mahalaya Temple at Sidhpur”