Ilay Cooper’s book on Shekhawati set me off on an extraordinary trip to that extraordinary place in January this year. I had to wait for nearly 6 months, though, before I felt ready to write about it — so overwhelming were my thoughts and emotions. This post on Mahensar is the last of 8 posts in the series on “The Painted Towns of Shekhawati”. If you haven’t read the introduction to Shekhawati’s history (and the series), I recommend that you do so now, before proceeding further. If you have already done so, then dive straight into the post.

Mahensar is well-known for two things — the paintings inside a place called Sone Chandi ki Dukaan (or the Gold and Silver Shop) and a liquour made from saunf or aniseed. I knew about the first, having read about it in Ilay Cooper’s book, but was completely ignorant about the second, till the manager of the hotel I was staying in told me about it.

According to him, no Rajput wedding in the Shekhawati region was complete without this particular liquor being served to the wedding guests. Why, it was popular across Haryana, Punjab and Delhi and was also more famous than the frescoes of the region and with heritage value as well !

So when I arrived in Mahensar from Bissau at around 2 on that January afternoon, I was expecting to see more of the famous liquor around instead of the frescoes. And I probably would have, if had not been a local election day at Mahensar and, therefore, a dry day.  There weren’t too many people around and the few frescoes visible were faded and located high up on the haveli walls. 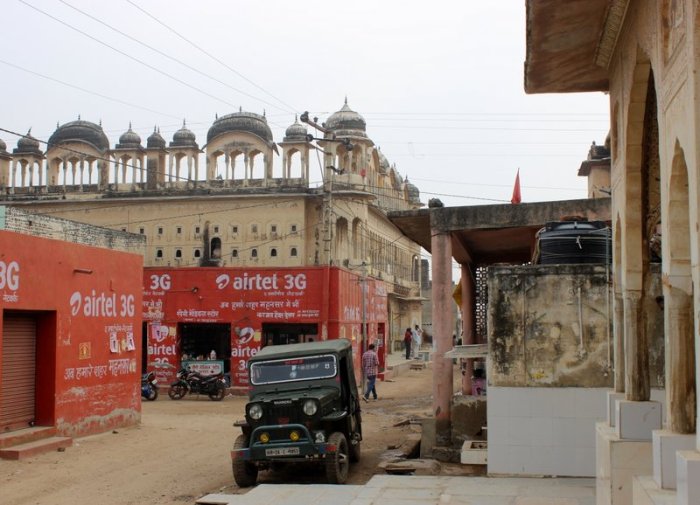 I thought of heading towards the Mahensar Fort, but my bad luck with Forts in Shekhawati continued — the Fort was now a hotel and out of bounds for the casual visitor. As I was looking around for a possible direction to head towards, a man came up to me with a large bunch of keys and said, “You must have come to see the Sone Chandi ki Dukaan. I’m the caretaker of that place. Come, I will open it up for you.” 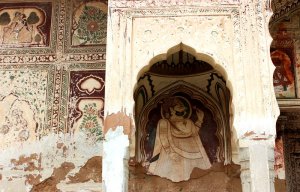 Mahensar was inherited by Nawal Singh (yes, the same one who founded Nawalgarh) in 1746. He promptly built a Fort and also town walls, though nothing remains of the latter.

The Poddars were the most prominent bania family in Mahensar and are reported to have built 6 havelis. They made their fortunes in Calcutta (now Kolkata) and along with the more traditional style havelis, also built one shown in the photo below in an architectural style strongly reminiscent of houses in Calcutta. Sadly, this one did not have any visible frescoes, which was perhaps a good thing as the gates were chained together and locked.

“This is the Sone Chandi Ki Dukaan,” the man with the keys announced as he stopped outside a plain, whitewashed traditional styled structure with a verandah. I looked a little dubiously at it for it seemed too plain. According to what I had read in Ilay Cooper’s books and other accounts too, the Dukaan or the shop did not sell gold or silver; rather the name came from the paintings inside which used gold liberally.

The man must have noticed the expression on my face for he said with a touch of amusement, “Don’t worry, Madam. All the sona and chandi are inside. You will like it.” Saying this he unlocked the doors and ushered me inside. Initially, I couldn’t make out much, but as my eyes adjusted to the dim light and the details started popping up, I was stunned into open-mouthedness (I know there is no such word, but there is really no equivalent to what I felt at that time).

The red and gold interiors of the dukaan was dazzling and in surprisingly good condition considering that they are over 150 years old. The dukaan is one long and narrow room with three vaulted ceilings. Each ceiling is intricately painted — one has scenes from the Ramayana in one, the central ceiling has the incarnations of Vishnu, and the third ceiling has scenes from the life of Krishna. The walls are also painted, but not as intricately as the ceilings.

As I walked though the dukaan, looking up at the ceiling and the paintings, one by one, noticing the details (and ignoring the growing crick in my neck), two things struck me: (i) the Mughal miniature style of painting, and (ii) the use of a water body to introduce a major break or shift in the narrative. In both the Ramayana set of paintings and those from the life of Krishna, it is the river or the sea that marks the shift in scene / phase of the story. Click on the photo below to see the full details.

Though I was aware of certain narratives that mention of more than 10 avatars of Vishnu, I was still surprised to see 24 of them, including the better known 10 avatars. Initially, I was puzzled at the unfamiliar depictions, but after caretaker pointed them out to me it got clear. Unfortunately, except for two of the lesser known avatars, all the other photographs came out blurred and unfit to be shared here.

Presenting a set of 34 photographs from the Sone Chandi Ki Dukaan and also of some frescoes in Mahensar. Clicking on any of the captioned photographs will start a slide show. Though you can start the slide show from any photograph, I recommend that you begin with the first, and once you have finished seeing the photos, don’t forget to come back to read the rest of the post. 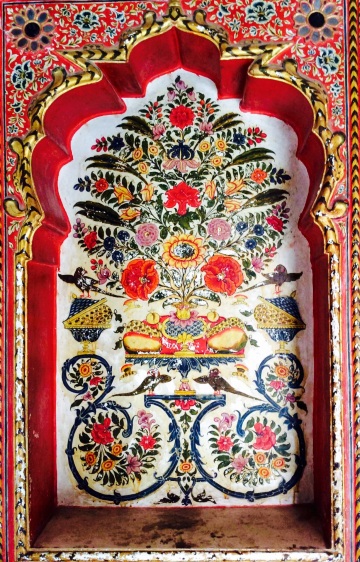 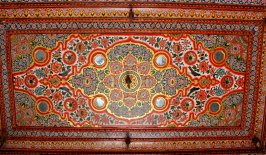 The carpet like ceiling in the central vault of the Sone Chandi Ki Dukaan. laid out like a carpet and inlaid with mirrors 24 avatars of Vishnu (not in the picture) are painted around it 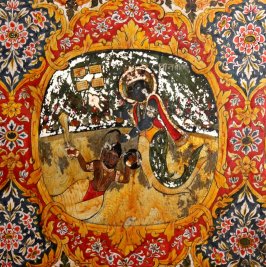 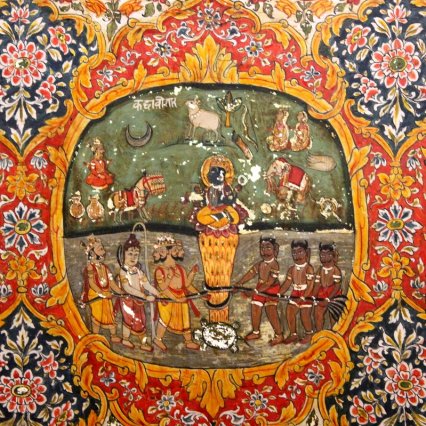 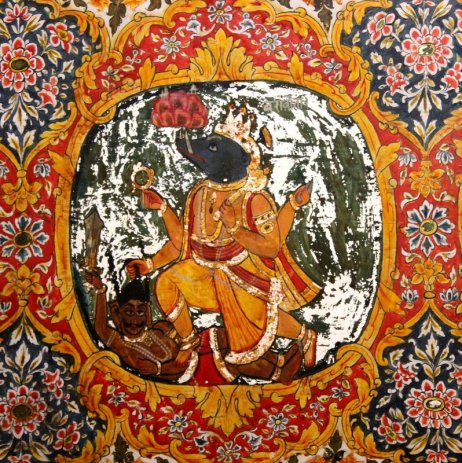 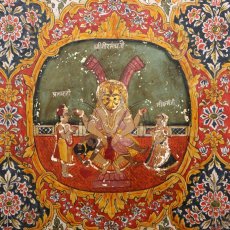 Detail from ceiling depicting the various avatars of Vishnu: Narasimha Avatar. Note how the figures are labelled in the devnagari script 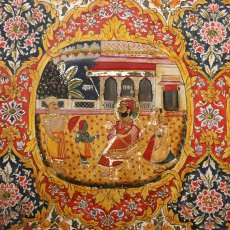 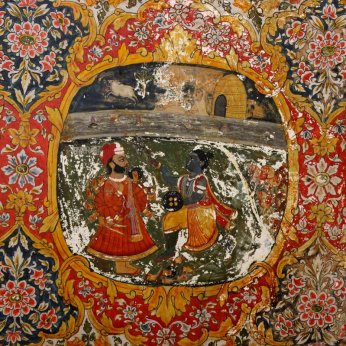 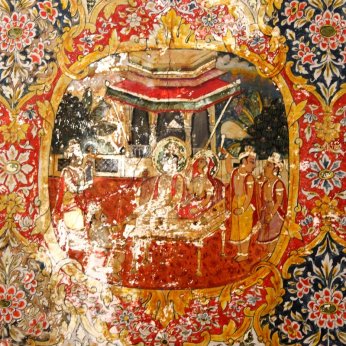 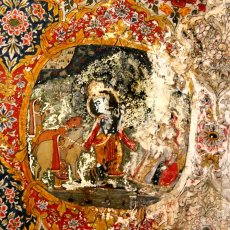 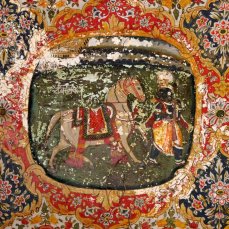 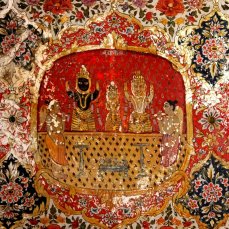 Detail from ceiling depicting the various avatars of Vishnu: For some reason this has been labelled as Buddha Avatar, when this actually depicts Jagannatha (left) with Subhadra (centre) and Balabhadra (right) 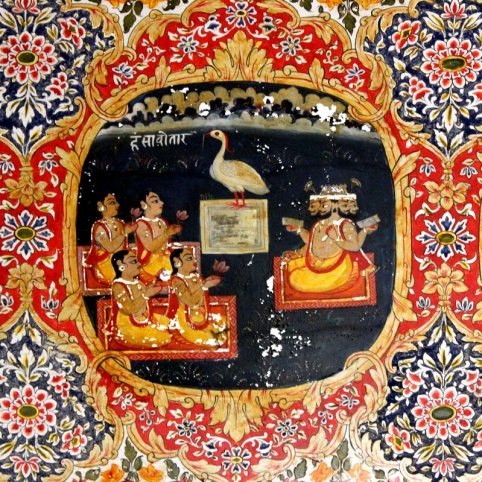 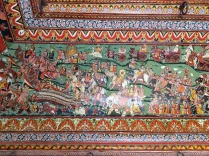 This depicts Rama’s wedding procession. Details given in the next 3 photographs

Detail from ceiling depicting the Ramayana: Part of Rama’s marriage procession or baarat. A group of soldiers dressed in East India Company uniform add a quirky touch to this representation. There are people in bullock carts, in palanquins and in the top right hand corner of the photo is Brahma on his swan 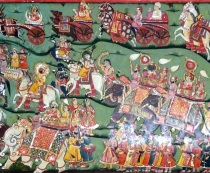 Detail from the ceiling depicting the Ramayana: The Gods themselves are part of Rama’s wedding procession. Rama and Lakshmana are seated on elephants and other recognisable figures are Chandra, Surya, Indra, Shiva, Ganesha, and Kartikeya on their mounts

Detail from the ceiling depicting the Ramayana: Wandering minstrels, bards and musicians make up the rear of the Rama’s wedding procession

Detail from the ceiling depicting the Ramayana: The first thing is how the water body — river on the left and sea on the right — mark turning points in the story. The central portion is about Rama’s exile in the forest, kidnapping of Sita, killing of Jatayu, meeting with Hanuman and Sugriva, killing of Vali and crossing over to Lanka

Close up of the previous photograph 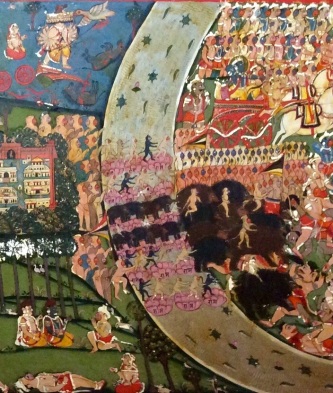 The crossing over of Rama’s army of vanars and bears to lanka over the Rama Setu. Notice ‘ram’ written on the rocks. 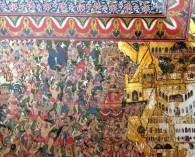 Detail from the ceiling depicting the Ramayana: The battle at Lanka, a city that was referred to as Sone ki Lanka or the Golden Lanka. Note how Lanka is painted in gold. 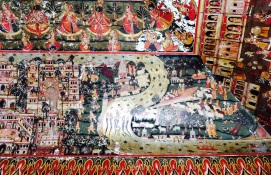 Scenes from the life of Krishna: The Kaliya Mardana where Krishna subdues the snake demon 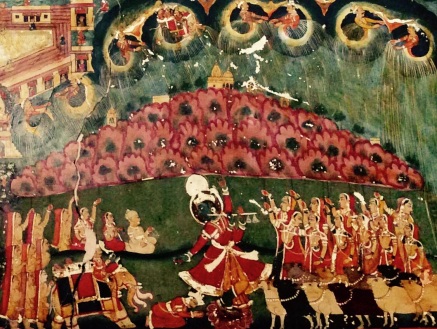 Detail from the ceiling depicting the life of Krishna: As the gods rain their fury on Gokul, Krishna lifts the Govardhan mountain and his viallers huddle under it for safely 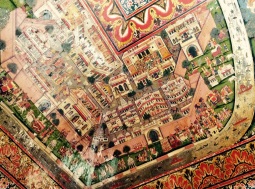 The city of Mathura drawn in such fine detail

Scenes from the life of Krishna: The slaying of Kamsa 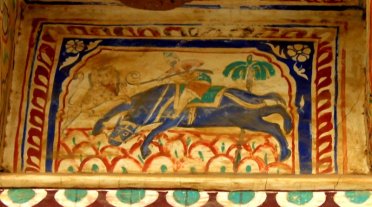 Hunting scene on a haveli: A lion mauls a horse even as as the horse rider aims an arrow at it. 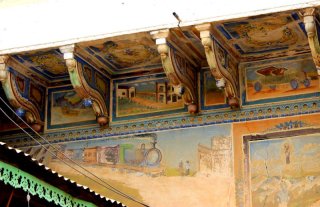 Pastel coloured frescoes from the external wall of a haveli

A train, but with a difference – this is transporting animals instead of people. 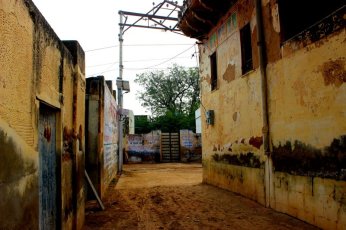 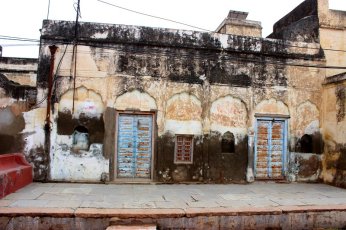 I left the Sone Chandi ki Dukaan in a bit of a daze, a massive neck ache from staring at the ceiling for so long, and questions buzzing in my head.

Who was this visionary artist?
How did he set about painting the interiors?
Why did he introduce the quirky element of soldiers in the East India company uniform in Rama’s wedding procession?
Did he develop a crick in the neck while painting?
How have these paintings survived for so long?
Why was a shop painted in such a grand manner?

I was feeling so overwhelmed that I did not feel like exploring the other havelis. All I wanted to do was to close my eyes and recall the paintings one by one — the fine details, the stories, the depiction. But I did see other frescoes and idly took their photographs without realising what I was clicking. Its only when I downloaded the photographs that I realised what I had seen that day.

Mahensar was the last of the painted towns I saw on that trip to Shekhawati. As I was waiting for my car to pick me up, the man who you can see in the photograph below asked me where all I’d been in Shekhawati. After listening to me, he gruffly said, “It’s not enough. You have to come back.” 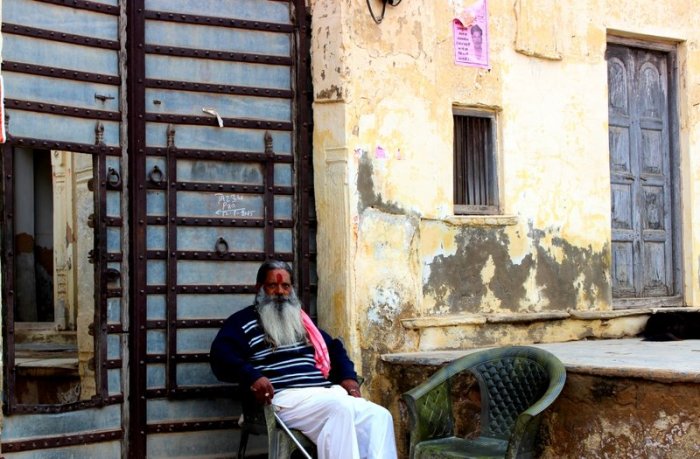 .Yes, I have to go back for there is so much more to see and experience in Shekhawati. And I will go back. Sooner rather than later. 🙂

31 thoughts on “The painted towns of Shekhawati-7: Mahensar”

Last week, I received a beautiful bookmark as a gift from @rameshpkhade. It was an interpretation of Van Gogh’s The Starry Night” - instead of the blue and yellow combination, it has been rendered in red and yellow by the artist @horinsakua. Swipe to see the details.
The short caption for this post is - this is a book that I didn’t know I had to read ! As for the long caption, read on…
A few months ago @euphorhea and @kurushdalal gifted me a couple of geodes - which in layperson’s terms can be explained as hollow rocks, which when broken open reveal crystals.
Things to do during a power cut #216