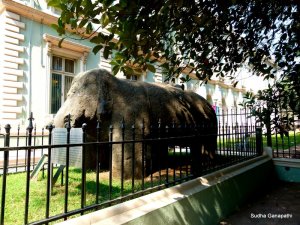 Carved in the 6th century from a single piece of rock at one of the many entrances to the island known as Gharpuri, the Elephant saw many a king come and go for over a 1000 years. Then one day, in early 16th century, the Elephant saw the first European colonisers — the Portuguese — to the region. The Portuguese were so awed by him that they promptly named the Gharpuri after him — the Elephanta Island, a name it has been known as since then.

When the Portuguese relinquished their rights over the region to the British 150 years later, the Elephant was witness to this as well. The new colonisers were also impressed and awed with him. In fact, the English were so impressed with the Elephant, that they wanted to take him home to England. But this was no easy task and it took them nearly 200 years to put their wish in action.

On a sunny day in 1864, a crane was brought to the Island to lift the Elephant from his rocky home and transport him to ship that would then take him to a new home at a museum in England. This was no easy task and the local people and the English Officers directing this operation watched with bated breath as the crane huffed and puffed, and finally managed to lift the Elephant.

And as the arm of the crane swung around with its elephantine cargo, disaster struck. The crane snapped sending the Elephant crashing down and breaking him into pieces.

END_OF_DOCUMENT_TOKEN_TO_BE_REPLACED

I like the idea of trying out different kinds of food, but at the same time will not go out of my way to try them. Yes, I’m weird and contrary that way. It’s a rare occasion when I get excited about trying out something completely new. This box of goodies based on #Dogri cuisine is one such.
About yesterday evening…
#MuseumTreasures 20
My neivedayam for Dussehra today !