The basement room is cool and dark, and it’s whitewashed walls are bare. The only light in the room comes from the passage leading to the room and an overhead lamp, hung directly above a marble sarcophagus placed in the centre of the chamber. The simplicity of the sarcophagus, and the bare unadorned room belies the achievements and greatness of the person buried there — Jalal-ud-din Mohammad Akbar, the third Mughal Emperor.

I am in the burial chamber of Akbar’s Mausoleum at Sikandra. The fragrance of incense and marigold flowers is pleasant, and instead of the claustrophobia one would associate with underground and enclosed spaces, I feel only peace here. There is nobody in the room, save the caretaker who offers to say a prayer on my behalf, and soon a sonorous prayer fills the room, a prayer that continues to echo in my mind for a long time afterwards. 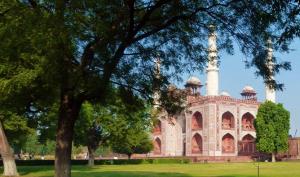 Akbar’s Mausoleum is in Sikandra, a suburb of Agra. Today, it has become so synonymous with the town’s name, that it is called Sikandra.

Located on the busy and perennially jammed, historical Grand Trunk Road or the NH2, “Sikandra” is about 10 km from Agra city. It was nearly 9 in the morning when I arrived at Sikandra, guide in tow, following a visit to the Taj Mahal and after negotiating horrendous traffic and road rage incidents.