It all began with a Twitter DM (or direct message) I received from my friend and fellow blogger, Anuradha Shankar.

It was the summer of 2014 and Anu was travelling, or doing a temple run as she preferred to call it, in the Tirunelveli district of Tamil Nadu. She would send me an occasional update about the temples she was visiting — delight over seeing exquisite murals in one or despair on coming across bathroom tiles in another.

When I received a DM from her that May evening, with a “See this !”, I wondered what was it she had sent me this time and whether it would be a rave or rant ! As it happened, it didn’t matter for the photograph that Anu had messaged me simply took my breath away.

I messaged back. Jain Art? In Tamil Nadu? Where? What? How? When? Anu replied, Yes. Yes. This is Kazhugumalai, 8th-9th century CE. Rest when I get back. I was stunned for till then I had no idea about the existence of Jain culture — past or present —in Tamil Nadu. I had wrongly assumed that Karnataka was the furthest South that Jainism had spread to.

END_OF_DOCUMENT_TOKEN_TO_BE_REPLACED 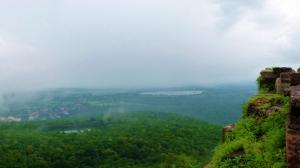 The town of Champaner is situated at the base of Pavagadh Hill, which is a sudden rise in an otherwise gently undulating landscape. A climb up Pavagadh Hill reveals a heady mix of interesting geology, mythology, religious confluence, history, strategic military brilliance and foresight, clever design and architecture, rainwater harvesting systems, sustainable measures, a hidden valley of flowers, etc.

Geologically, Pavagadh Hill is quite different from Champaner. The Hill is composed of rhyolite, a volcanic rock, while Champaner is almost entirely sandstone, a sedimentary rock. It is this volcanic feature which made Pavagadh an important and strategic location for whoever ruled it. About 830 m high, it descends or ascends (depending on your point of view) in five plateaus, each of which are separated by steep cliffs. This feature enabled fortifications to be built at vantage points around the hill in a circular manner, making it indefensible and non-breachable. And also confusing for the visitor/tourist.