Once upon a time in Bombay (actually, this was about a 100 years back), there lived a man called Lowji Megji. He was a cotton merchant and ran a very successful business exporting cotton. He lived with his wife, mother, 5 sons, 1 daughter, and 4 servants in a large mansion in Bombay (Note: about a 100 years back, political correctness had not crept in, so I use the words “Bombay” and “servants” in this post).

Lowji Megji loved all his children, but he loved his daughter Kusumbala just a little bit more. Nobody minded this, as everyone who knew Kusumbala also loved her just a little bit more. She was a kind-hearted, happy and cheerful soul, who always spread joy wherever she went. She loved going with her father to his cotton godown and giving drinking water to the workers who loaded and unloaded the cotton bales. The workers too loved her a lot and would wait for her visits to the godown eagerly.

Unfortunately, such visits were rare as Kusumbala was a sickly child and prone to frequent bouts of some illness or the other. In her 13th year, her frail body could not withstand yet another bout of illness and she finally succumbed. The family was disconsolate and Lowji Megji devastated. He lost all interest in his business and if it hadn’t been for his faithful employees, he would have been ruined. 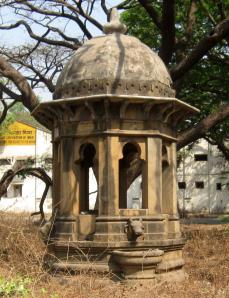 One hot summer’s day, a few months after the death of Kusumbala, Lowji Megji was half-heartedly supervising the unloading of cotton bales at his godown. As he was walking around the godown, he overheard a worker telling another, “If Kusum baby were here today, she would be running around now giving us water.”

At any other time, this remark would further grieved Lowji Megji. But this time, it triggered an idea—why not build a public drinking water fountain in the memory of Kusumbala? It would be a fitting tribute to his beloved daughter. Once this idea crystallised in his mind, Lowji Megji was like a man possessed and within a year the drinking water fountain was built on public land near his godown at Reay Road and inaugurated amidst great fanfare.

It was a much appreciated gesture by all those who used the drinking water fountain every day—the cotton loaders and unloaders, the bullock cart drivers who transported the cotton to the docks for export, visiting traders… For the workers, it was as if Kusumbala herself was there to give them water.

The years passed. Lowji Megji died, his business disintegrated, India gained Independence, and the ownership of the godown changed. Lowji Megji’s cotton godown and other neighbouring sheds were acquired by the Food Corporation of India for their laboratories and offices.

The water fountain did not remain unaffected by these changes. Slowly, it fell into disrepair—first the brass taps were stolen, next the buffalo-headed water spouts were vandalised, and as the water fountain stopped functioning, weeds took over. Soon, the water fountain became a place to discard broken and empty alcohol bottles, used condoms, plastic bags, cigarette and beedi ends, gutkha and supari packets, etc. Nearly a 100 years on, this is the state of Kusumbala’s fountain today.

So where is Kusumbala’s fountain? If you are travelling on the Harbour Line towards Chhatrapati Shivaji Terminus (CST), look out left after you leave Cotton Green station. As the train comes down the gentle incline from Cotton Green and starts slowing down for the Reay Road station halt, you will see this beautiful structure on the left.

I first saw Kusumbala’s fountain in 1993 on my way to CST. The incongruence of its design and appearance in the midst of industrial-looking buildings stuck in my mind, and ever since that day I always looked out for it whenever I travelled to CST. Though I always wondered about the fountain and wanted to see it up close, it took me 18 years to actually alight at Reay Road Station and walk the few minutes to the fountain site.

When I reached Kusumbala’s Fountain last weekend, there was nobody around, except for a dog and a few geckos sunning themselves. Though the plaque commemorating Kusumbala’s fountain gave a clue as to what it was all about, it didn’t shed any information on how the fountain came to be built. It is this lack of any information on who Lowji Megji and Kusumbala were that prompted me to write a fictional background to the fountain in this blog post. I could be completely off the mark, but then again there could be some truth in my fictional account !

Note: All names and dates in the narration here are real, as is Kusumbala’s fountain, but the account that I have written is entirely fictional. If you do come across any information on this fountain, I would be very happy if you could share it with me.