A couple of years back, I happened to travel in a cab whose driver was very chatty and unusually boastful of his knowledge of the city. About 20 minutes into the journey, I had enough of his tales and asked him:

“Since you know so much about Mumbai, tell me how does one get to Sewri Fort. I want to visit it.”

“Of course, there is a fort there. I read a report about the Fort in the newspaper only last week.”

“Newspaper? Bah !” said the driver in a dismissive tone. “Don’t believe everything that they print. Listen to me, I’ve been there so many times that I know the area really well. I know Sewri Jetty, all the automobile service centres there, the Port Trust Offices, the dargah… everything. I can tell you confidently that I have never come across any Fort there.”

And that was the end of the conversation.

Last month, I visited Sewri Fort. Yes, there is a Fort, but after visiting it I could understand why the cab driver and many others like him are neither aware of its location or existence. Incidentally, it is located right next to the dargah that the driver mentioned. Just see the view outside the Fort in the photograph below. Is there any indication that there is a Fort anywhere in the vicinity?

The structure behind the white shed is the Fort and there are no signboards to indicate that this is the Sewri Fort. It also doesn’t help that the Fort doesn’t look like one. By looks, I mean there are no discernible ramparts or fortifications to be seen. In fact, if Anuradha, a fellow blogger who had visited the Fort earlier, had not been with me and showed the way, I’m pretty sure I would not have been to find it. 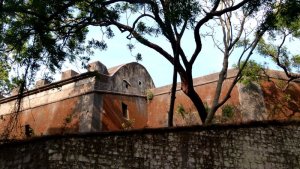 Once I’d gotten past the surprise of the rather nondescript entrance to Sewri Fort, I was all set to explore it. But first, let me share a little bit of the history of the Fort, which is one of Mumbai’s 8 existing Forts.

According to the information available online, the Sewri Fort was built by the British in 1680, and was one of the 3 forts constructed by them on the eastern shoreline, the other two being Sion Fort and Mazgaon Fort. It is built on a high hill from rocks quarried from its hillside and is surrounded by land on 3 sides; the 4th side is a sheer cliff that drops down into the mangroves.

Built for security purposes, the Sewri Fort served as a watchtower and was also the first line of defence in the case of attacks and invasions from the

The above extract is from Govind Narayan’s Mumbai: An Urban Biography from 1863, which also gives a rather vivid attack on Mumbai on February 22, 1689, when

the Siddi of Habsan, Yakut Khan arrived with a force of 20,000, landed at Sewri and commandeered the Sewri Fort… the Siddi army… attacked the fort at Mazgoan the following day and drove away the sentries. All the guns, gunpowder and ten boxes of money fell into their hands… Yakut Khan stayed in Mumbai for over a year and left on 8 June 1690 after burning down the fort at Mazgaon.

The British must have learnt from the invasion of Yakut Khan, for when the Portuguese attacked Sewri Fort in 1772, their defences held. As threats from the sea abated, the importance of the Sewri Fort too waned and it got converted into a godown of the Mumbai Port Trust. Not surprisingly, it was in a pretty bad shape when the Maharashtra State’s Department of Archaeology and Museums took over its upkeep and renovation a few years back and classified it as a Grade I structure. 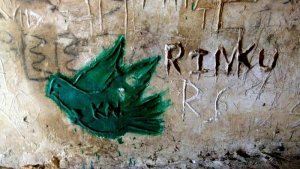 It’s only when you enter the Fort through the main entrance that you realise that there is an inner structure as well and the entrance to the inner portions is set at right angles to the main entrance — a common defense mechanism seen in forts.

One then has to pass through a dark room full of modern-day graffiti before emerging into a courtyard-like space with a lone tree at one end. On one side are domed structures, which could have been guard rooms or storage for arms and ammunition or both. On the other side is a roofless room with windows that look out onto the seaward side of the Fort. 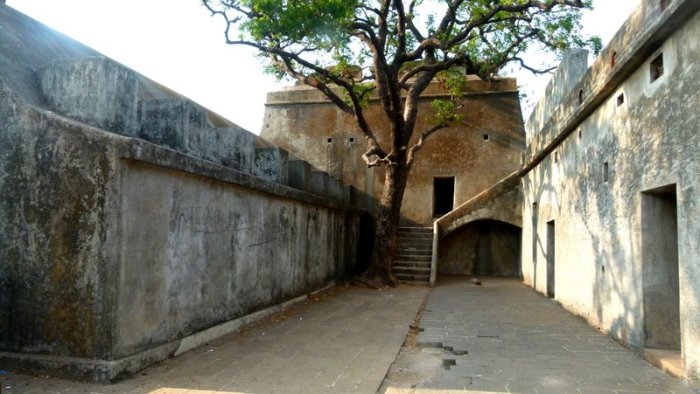 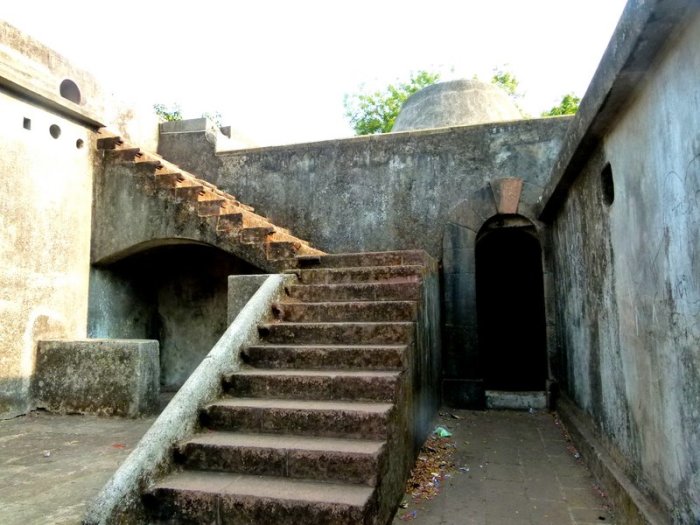 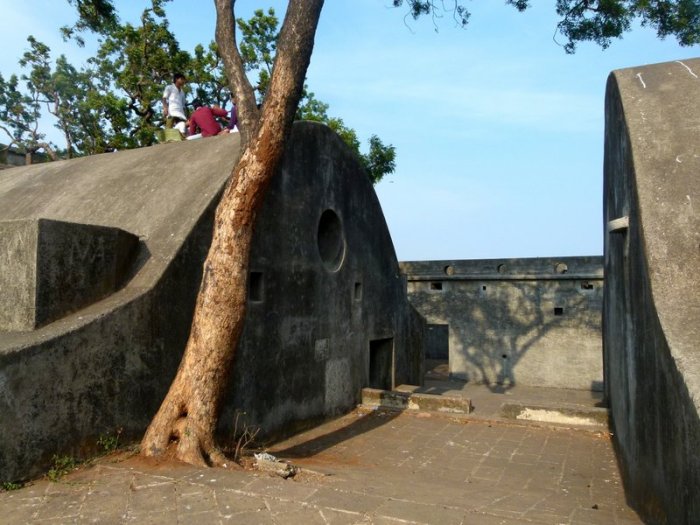 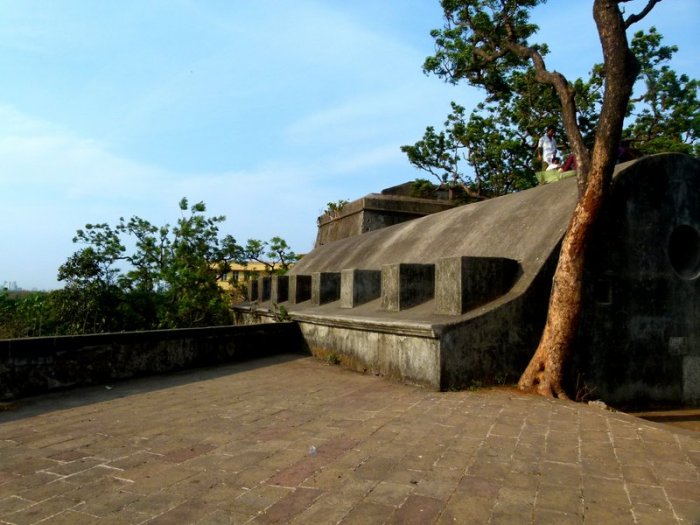 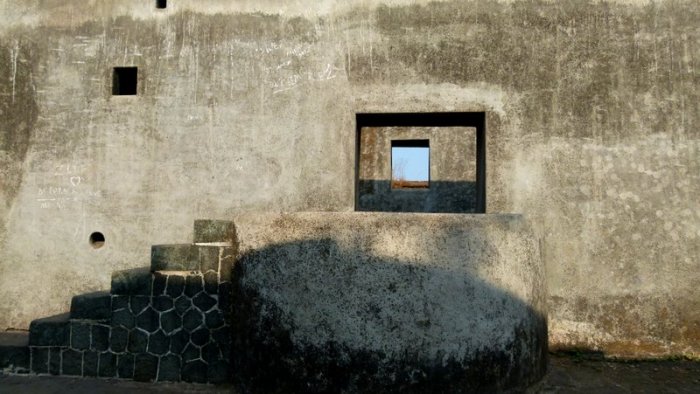 The views from the Sewri Fort are varied — depending on the direction it varies from highrises to industrial units to the Sewri Jetty to the dargah next door to flamingos (you can read more about that and my excitement on seeing them here). 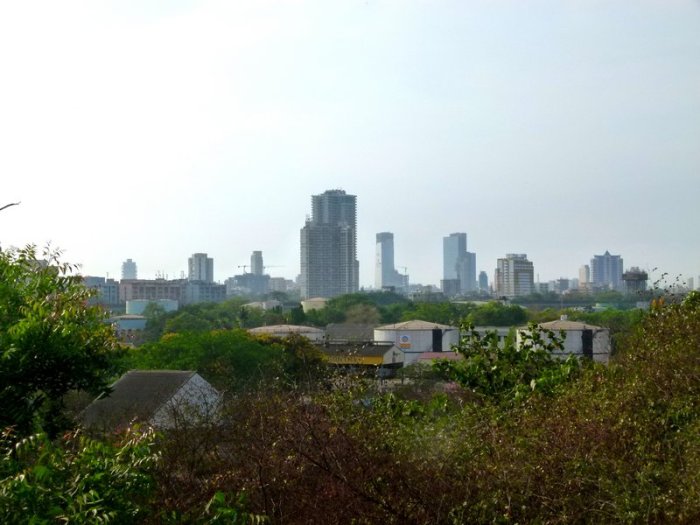 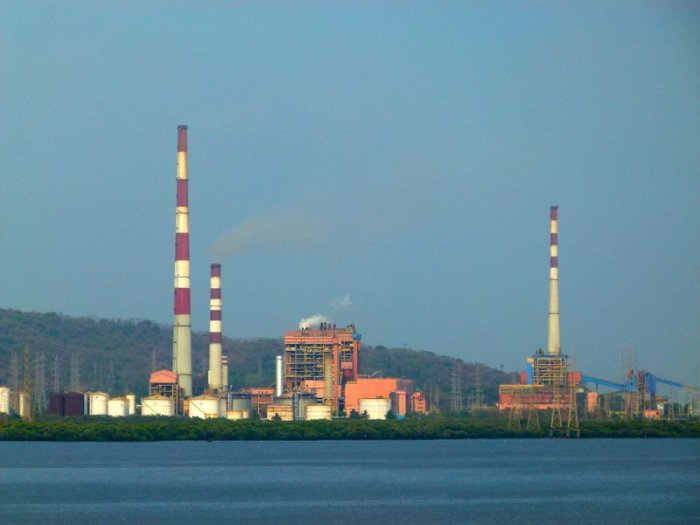 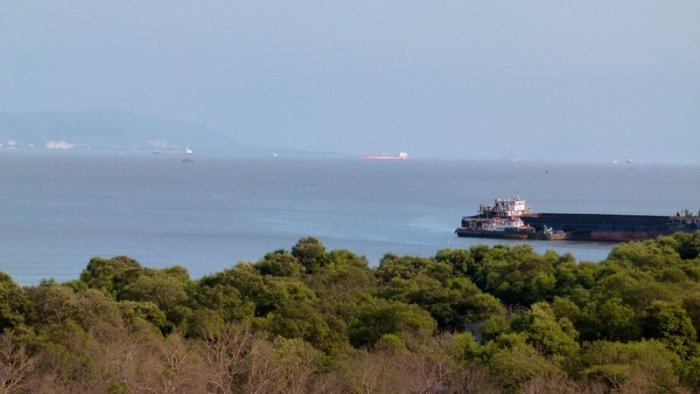 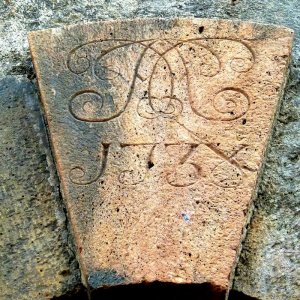 I found the Sewri Fort very interesting in many aspects — it strategic location, its size, its architecture, and of course its history or rather lack of. Whatever little information I could find on the internet mention that the Fort was built in 1680 by the British. Somehow, I’m not too sure about this due to two reasons: (i) the design is not British, and (ii) this stone (see photo on the right) which is placed over the entrance to the Fort’s courtyard.

I’m not sure what this inscription says though some fellow bloggers have interpreted it to read 1734 or 1736. The only thing I’m sure of is that it does not read 1680, the date when the Fort is supposed to have been built. My theory is that there was an older structure present here, perhaps built by the Portuguese, which was rebuilt by the British only in the 18th century and this date stone represents that.

Coming back to the design of the Fort, in spite of the kilos of concrete poured over the original structure in the name of renovation or restoration, the design has thankfully not been interfered with. The curved roof of the guard room/ammunition store looks more Portuguese and less British to me. Just saying. 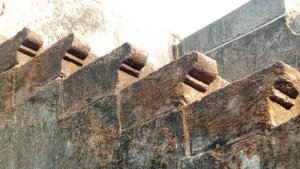 But the most interesting aspect of the Sewri Fort is the variety of building stones used — dark greyish black basalt, yellowish pink rhyolite, to a dark green rock that I couldn’t identify — which makes me think that the interiors of the Fort were polychromatic and there was a certain aesthetic sense involved in building it. The outer walls of the Fort would have been the same colour as that of the hillock on which it was based to blend in with the landscape. In fact, when we tried to locate the Fort from the Sewri Jetty we couldn’t see it, though the Jetty was clearly visible from the Fort (see the 13th photo in this post). 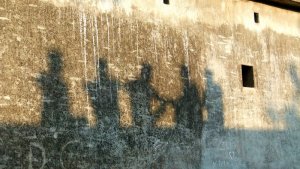 We spent a pleasant evening at the Fort before making our way to the Sewri Jetty to see the flamingos. Like the Sion Fort, the Sewri Fort too had quite a few young men just hanging around the place. They were quite curious about what we (a group of 3 women and a child) were up to and apart from asking us to take their photographs, didn’t bother us. But still, I was thankful for the company I had and was happy that I wasn’t alone. 🙂

The Sewri Fort has been the most fascinating of the forts I have visited and it’s vantage point on the eastern shoreline makes it all the more so.The complete lack of signboards or information boards though was quite a frustrating experience, and I always wonder why it has to be so.

Last week, I read a newspaper report that said that the Maharashtra Tourism Department Corporation (MTDC) has plans of reviving the Sewri Fort and proposed a “makeover of the fort to include a museum, mini-theatre, souvenir shop and an open deck restaurant”.

Dear MTDC, what about basic things like cleaning up the surroundings and the Fort itself, posting signboards and information boards, and having security guards in place? While I agree that the Sewri Fort needs to be revived and that much needs to be done, an open air deck restaurant is not one of them. Have you considered the fact that the restaurant will only threaten the already dying mangroves in the area and, in turn, drive away the migratory birds that you claim people can watch from the deck?

You don’t need to ‘prettify’ and ‘fancify’ Sewri Fort. Just get the basics in place and people will come.

=====
Read about the other Forts of Mumbai

27 thoughts on “The Sewri Fort”

Last week, I received a beautiful bookmark as a gift from @rameshpkhade. It was an interpretation of Van Gogh’s The Starry Night” - instead of the blue and yellow combination, it has been rendered in red and yellow by the artist @horinsakua. Swipe to see the details.
The short caption for this post is - this is a book that I didn’t know I had to read ! As for the long caption, read on…
A few months ago @euphorhea and @kurushdalal gifted me a couple of geodes - which in layperson’s terms can be explained as hollow rocks, which when broken open reveal crystals.
Things to do during a power cut #216