Madurai is home to a number of sacred sites whose origins have now passed into the land of myth and legends. The original temple structures built on the sacred sites no longer exist today for over the centuries, they have been added to or rebuilt or renovated to become the temple complexes they are today. Along the way their myths, legends and history have intertwined to create a tradition of rituals and festivals that continue to present day.

The Kallazhagar and Koodal Azhagar Kovils are two such temples in Madurai. Both are Vishnu temples and are part of the 108 divya desams or divya kshetrams — temples mentioned by the Alvars or the poet-saints of the Srivaishnava tradition. The main deities in both the temples are called Azhagar, which means beautiful / handsome in Tamil. Both the Azhagar Kovils have their own unique origin story or sthalapuranam, and are significant in understanding the region’s political history, religious traditions, and architectural landscape.

Let us first begin with an exploration of the KALLAZHAGAR KOVIL.

Strictly speaking, the Kallazhagar Kovil is not in Madurai, but is located about 20 km North of the city at the foothills of the lush Azhagar Malai (beautiful hill in Tamil). Our group visited this temple on a beautiful January morning in 2016 and the picturesque location, pleasant weather, few visitors and listening to the stories, myths, legends and music associated with Kallazhagar made for a memorable trip.

Kallazhagar finds mention in the Varaha Purana, Vishnu Purana, the Thiruppugazh, Silapadikaram, the writings of the Alvars, etc, and has many legends associated with it. This includes one of the Pandavas having visited it and another of Lord Yama visiting the temple every night to pray to Kallazhagar. The Meenakshi Amman Temple in Madurai has a connection with Kallazhagar where, according to legend, it is Azhagar as Vishnu, Meenakshi’s brother, who hands her over in marriage to Shiva as Sundareshwarar. 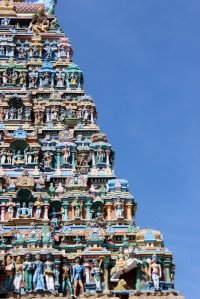 There are two versions regarding the origin of the name Kallazhagar. According to the first, the area used to be inhabited by the Kallar tribe and there was a temple dedicated to their deity on the site where the present temple is. Sometime in the distant past, the tribal deity got assimilated into the Vaishnava pantheon and became Perumal or Vishnu Himself. Since He was so beautiful, He was called Azhagar Swami and over time came to be called Kallazhagar.

The second version is more straightforward. It says that because Azhagar is so beautiful, he steals the hearts of His devotees and is, therefore, a kallar or a thief !

The earliest temple recorded on this site is supposed to have been built in the 3rd century CE, but since then has been rebuilt, renovated and repaired many times since then.  Azhagar Kovil has always been important for the rulers of Madurai and has, therefore, received generous patronage from them.

Pandyan kings like Malayadhwaja renovated the temple and built the entrance gopuram, while Sundara Pandian covered the temple vimana with gold. Thirumalai Nayak, Madurai’s best known king, built a mandapam or opposite the entrance to the temple complex. The Kalyana Mandapam, opposite the entrance to the main temple, was also built during the Nayaka rule. Krishnadevaraya, the Vijayanagara King, tried to contribute to the temple by attempting to build a temple tower, but his death and eventual takeover of the region by the Nayakas, left the tower unfinished. Today, the ruins of the incomplete tower still stands, lonely and neglected.

The entrance gopuram reported to have been built by the Pandyan King, Malaydhwaja. The stucco work on the gopuram has been repaired and redone several times since then 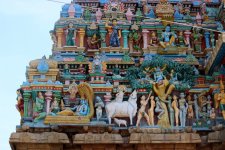 Detail from the gopuram. Vishnu on Seshnag, Kamadhenu, and gopis pleading with Krishna to return their clothes 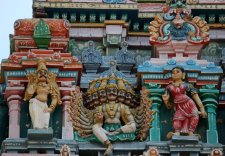 Detail from the gopuram: The 10-headed, 20-handed Ravana

Detail from the gopuram: A woman giving birth, Vishwamitra rejecting Menaka and Shakuntala, and more

These wicked looking blades/weapons were kept outside the temple, and I presume were used during the annual festival for some ceremony 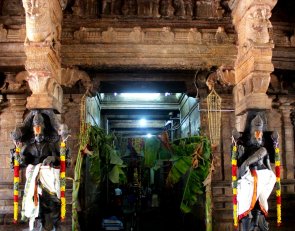 Dwarapalas at the entrance to the Kallazhagar Kovil

Painting on the ceiling at the entrance to the Kallazhar Kovil

One of the most beautiful depictions of Varaha I have seen. Here, Bhudevi is seated on Varaha’s lap and has her arm around his waist. What is not captured clearly in the photo is that even Varaha has his arm around her.

Detail from the Varaha sculpture. Here Varaha hold the beautiful feet of Bhudevi, his consort, in his pal and almost appears to be caressing her feet.

A close up of the handsome profile of Madana or Kamadeva. the aquiline nose, arched eyebrows and sensous lips are a trademark of Nayaka style 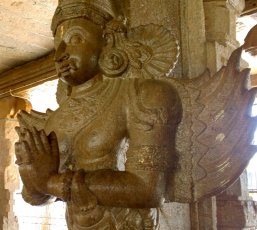 The incomplete tower initiated by the Vijayanagara King Krishnadeva Raya

While I enjoyed listening to the different legends and history of the Kallazhagar, the temple really came alive for me when Sriram, our group leader, told us about the Alvars and their association with the Kovil, especially Andal. When Andal had set out from Srivilliputhur to Srirangam to marry Sri Ranganatha, the presiding deity there, she made a halt at the Kallazhagar Kovil and promised Him 100 pots of butter (vennai) and 100 pots of sweet rice (akkaravadasil) if her wish got fulfilled.

But Andal couldn’t keep up her promise as she merged with Sri Ranganatha when she arrived at Srirangam. Centuries later, the Vaishnava saint Sri Ramanuja fulfilled her promise by offering the 100 pots of butter and sweet rice at the Kallazhagar Temple.

Hearing the story was one thing, but to have Bharat Sundar, the musician travelling with our group, actually sing Andal’s verses describing this episode at the Kallazhagar Kovil elevated the experience to a completely different level. Even as I type out this passage, I can hear Andal promising/bribing Kallazhagar with butter and sweet rice. This remains one of the most enduring memories for the trip and an experience I will cherish for ever.

The visit to the KOODAL AZHAGAR KOVIL took place on the same evening that we visited the other Azhagar Kovil. Located a short distance from the Meenakshi Amman Temple, the Koodal Azhagar Kovil is considered to be Madurai’s main Vishnu temple. The name of the temple is derived from Koodal, another name for ancient Madurai, and Azhagar, which means beautiful in Tamil.

According to legend, the architect of the Gods, Vishwakarma, himself built the first temple on this scared site. The current temple structure was built during the 16th and 17th centuries CE, replacing an earlier 9th century CE structure, probably built by the Pandyas.

Scholars of architecture opine that the Koodal Azhagar Temple is very important in understanding the development of temple architecture in the region due to the period they were built in —mid-16th to the early 18th century, when the Nayakas reigned in Madurai. This was one of the most active periods of temple construction, in what is today known as Tamil Nadu, with substantial expansion of existing temples as well as foundations for new temples being laid.

It is not only temples that were built during this period, but also palaces and city planning too — the current city of Madurai was laid out at that time. This period is also significant as Madurai became a political power centre once again after about 50 years of Muslim rule.

An unusual feature of the Koodal Azhagar Temple is that its central Vimana is as tall as the entrance gopuram at 125 ft, and can be seen from the road. This is unlike the Meenakshi Temple, also built by the Nayakas, where the size of the gopurams decrease inwards with the central vimanas being the smallest and not visible from outside the temple complex.

Another unusual feature (for me) is that the garbha griha of Koodal Azhagar is 3-storeyed, with all levels accessible to the public. In the lowest level, Koodal Azhagar is seated with Sridevi and Bhudevi on either side; in the second level he is a 3 m tall standing idol; and in the 3rd and uppermost level, he is in a reclining position. All three garbha grihas have murals painted on them, probably at a later date — maybe 18th-19th centuries.

Used to the familiar profusion of sculptures on the exterior walls of the temples, I was rather surprised to find plain walls and niches without any sculptures in them. Instead the ardhamandapa had paintings in the niches, which were probably done at a later date. Maybe the sculptures were never completed and installed or may be the niches were meant to be painted, rather than filled with sculptures. 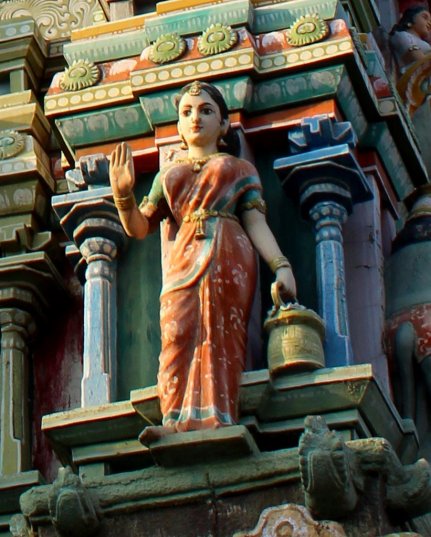 There was something very compelling about this beautiful stucco figure of a woman carrying a basket of flowers.

Detail from the Vimana: Vishnu on Garuda and Kamadhenu, the wish fulfilling cow 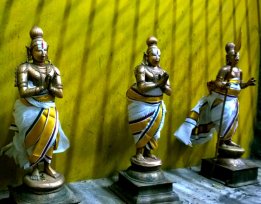 Bronze representation of the Alwars, the most revered of the Vaishnava saints

This was carved on one of the pillars near the temple entrance. I don’t know who this is, but found it most interesting. 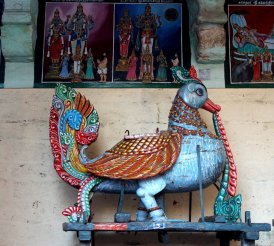 A wooden vahana which will be used to transport the festical image or Utsavar murti of a deity from the temple.

Another wooden vahana, probably used for the main deity during the annual festival of the temple 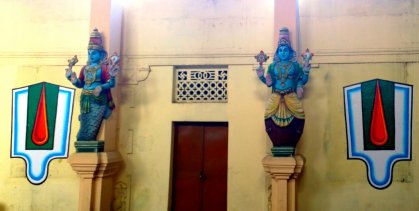 Matsya and Kurma avatars of Vishnu at the Koodal Azhagar Kovil

The trip to Madurai happened almost a year ago, and it was a trip that I thoroughly enjoyed. Writing about it after so many months has been an opportunity to relive those fabulous 3 days at Madurai and reminisce about many of the memories I cherish from that trip.

The Madurai trip was also one where I ended up thinking of and philosophising about beauty. About the beautiful idols and images worshiped in the temples, the grand and beautiful Nayaka sculptures, as well as the stunningly beautiful architecture and stucco work on the gopurams or gateways of the temples, among others.

But my thoughts on beauty was mostly about how the principal deities and/or their consorts in the temples I visited have names that mean or connote ‘beautiful / handsome’. For example, the consort of Meenakshi Amman is Sundareshwarar or “the beautiful (sundar) God (eshwar)”. The consort of Kallazhagar is Sundaravalli (again ‘sundar’ or beautiful in the name). The Utsavamurti of Kallazhagar is known as Sundararajan (or King of Beauty or Beautiful King). And of course there are the Azhagars of both Kovils themselves.

There is a pattern or a theme that I can see with emphasis on the word ‘Sundar/Azhagar’ or beautiful. I haven’t travelled as much, not do I know much about local temple history in other regions, but I think that this emphasis on beauty/beautiful in the names of deities in a small region is unusual.

Is it a subtle tussle for supremacy between the Saivaites and Vaishnavites?
Is it a coincidence?
Is it a reflection of the beautiful land they are located in?
Is the reason something else altogether?
Am I thinking and philosophising about beauty a bit too much?

What do you think?

PS: The best part of travel is the thoughts and directions it sends you off on and that too in the most unlikely direction ! In this case, beauty. 🙂

Disclaimer: I was part of a Chennai Pastforward group led by V. Sriram, that toured and explored Madurai. This was NOT a free, sponsored or discounted trip, and I paid the full fees.

18 thoughts on “The two Azhagar Kovils of Madurai”