A long, long time ago a temple was built in a forest.

The temple was on the banks of a perennial stream and at the foot of a hill deep inside the forest. The man who built it was the administrator of the region, and a minister in the court of the king who ruled the land. The temple was not big or grand in size, but was rich in detail. The main deity in the temple was the man’s ishta devta, Shiva or Mahadeva in the form of a lingam.

For some reason, the temple remained known only to the man, his soldiers and the people who lived in the forest. This turned out to be a good thing for when invaders came to the area intent on destroying places of worship, the temple was spared as they weren’t aware of it. The man and his soldiers had to flee the region, never to return again and with this, the temple entered a into a state of neglect and disrepair as there was no one to maintain it or care for it.

Centuries passed. The forest claimed the temple as its own and a thick undergrowth added to the temple remaining hidden, ensuring that nobody knew what lay within save snakes and other animals that had made it their home. Subsequent invaders to the region did not even enter the forest.

And then one day, in the not too distant past, something happened. A bold or maybe a lucky explorer or perhaps just someone who lost his way in the forest came upon the temple or rather its ruins. He informed the authorities concerned who immediately set out to uncover it. It wasn’t an easy task, but once the trees and undergrowth were cleared it was to reveal a temple like no other in Goa.

The Mahadev Temple of Tambdi Surla turned out to be quite a discovery and studies dated it to12–13 CE making it the oldest temple in the state. A visit to the temple last November underscored everything that I have described this temple to be. 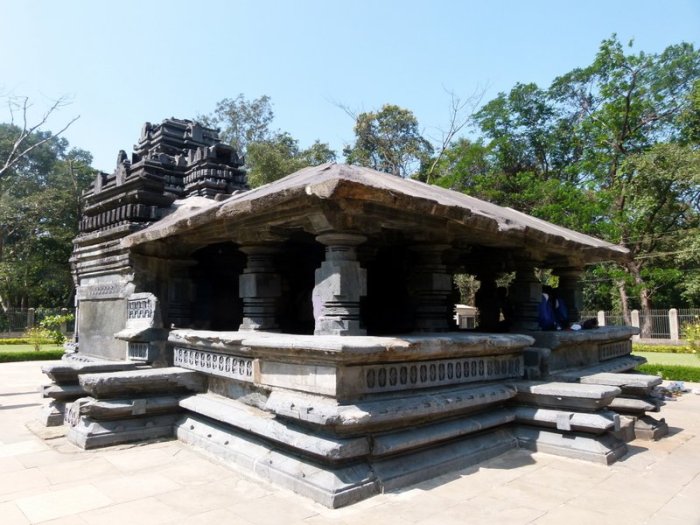