October 2011
It is almost noon when I arrive at Agra Fort tired, dehydrated, sunburned and with the beginnings of a headache.

It has been a long day that began before sunrise by queuing up with what seemed like the rest of world to see the Taj Mahal. Then it was onwards to Sikandra through terrible traffic and road rage incidents to see Akbar’s Mausoleum, and finally back to Agra to visit the I’timad-ud-Daulah.

It is hot and dry and the Fort is quite crowded. I’m exhausted and unable to concentrate on what the guide is saying. After about 15 minutes like this, I give up and decide to leave, with the hope that I’ll get a chance to visit Agra again and walk through the Fort gates once more. 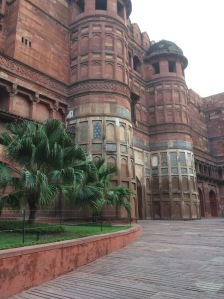 It is 6.30 am and the sun has just risen when I arrive at the Agra Fort fresh from a good night’s sleep and raring to explore it. I buy my tickets, hire a guide, walk past a smiling security guard and I’m in.

The morning is cool, though there are indications that the day will be a hot one. The morning haze initially makes everything look dull and grey, but as the sun ascends, the sunlight permeates through it suffusing the red of the Fort with a beautiful golden glow.

I’m the first tourist to enter the Fort that morning and as I find out later, the only tourist for the next 2 hours or so — everyone’s busy at the Taj, you see. Not that I’m complaining. 🙂

The Agra Fort is a massive fortified structure built by the Mughal Emperor Akbar on the site of a pre-existing Lodi-era Fort. Some accounts say that there has always been some sort of fortification right from Ashokan times; the Lodi-era Fort itself was supposed to have been constructed on an existing fort called Badalgarh, built by a local Rajput chief by the name of Badal Singh.

The Fort is built from the same kind of red sandstone used at Fatehpur Sikri and makes for an impressive sight.

The towering fort walls are near perpendicular enclosing a circumference of 2.5 km. When the Fort was built, the River Yamuna flowed next to it; today, a road runs along the Fort, the river having receded to some distance away.

Agra Fort took 95 years to be completed in the way that we see it today. Even though four Mughal Emperors lived here — Akbar, Jahangir, Shah Jahan and Aurangzeb — only the first three contributed to the building activities in the Fort. It is interesting to see the progression from sandstone (Akbar) to a mix of sandstone and marble (Jahangir) to only marble (Shah Jahan) as the preferred choice of building material. At one point, the Fort was supposed to contain within its walls 500 buildings; most of the non-imperial buildings were destroyed during British occupation.

A large portion of the Fort is not accessible to the public today as it is occupied by the Indian Army. That’s one of the reasons why visitors do not enter the Fort from what was originally the main gate. Rather, they enter the Fort, as I did, from the Amar Singh Gate, which was supposed to be the private entrance of the royal family.

Once inside and a couple of twists and turns later, there is a steepish climb up a grooved ramp. The grooves enabled quick movement of horses then; mere mortals like me today huff and puff discreetly to the top to see the first of the many courtyards and buildings open to the public and begin the tour of Agra Fort.

I thought these were tiles, and the guidebooks also mention that they are tiles. But my guide and a closer look revealed otherwise; these are painted on the Fort walls to look like tiles.

Artisans from Bengal were brought to create these carvings on sandstone. I cannot help wondering how long it took to carve these…

Khas Mahal was built in the 17th century. Constructed almost entirely out of white marble the exteriors and the interiors are inlaid with different coloured stones as well as semi-precious gemstones to create geometric or floral patterns.

Khas Mahal overlooks Anguri Bagh, a traditional Mughal style garden divided into four quarters. The rooms leading off from this courtyard are considered to have been for the zenana or the women of the royal family.

The Musamman Burj or Shah Burj is undoubtedly the best known structure within the Agra Fort. It is also the most beautiful. An octagonal shaped tower, Shah Jahan spent the final years of his life captive in this very tower. He spent his waking hours staring across the Yamuna at the Taj Mahal, where his beloved wife Mumtaz lay buried. he was allowed to leave the Burj only to pray at his personal mosque a little distance away.

Macchli Bhavan is another courtyard complex that is so named as it used to have a fish pond. The imperial baths were in this part of the Fort.

Machhli Bhawan leads to the Diwan-e-Aam or the hall of public audience. It is a large many pillared hall that looks out into an even larger courtyard. 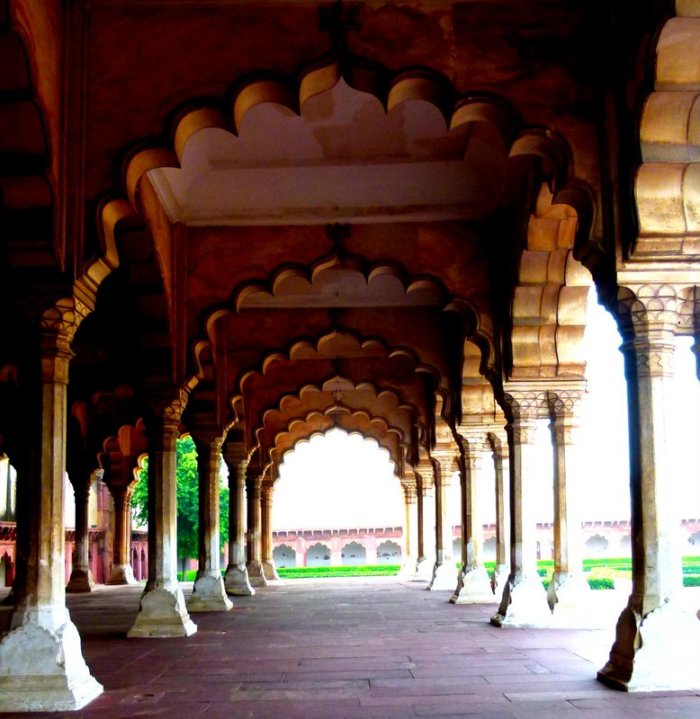 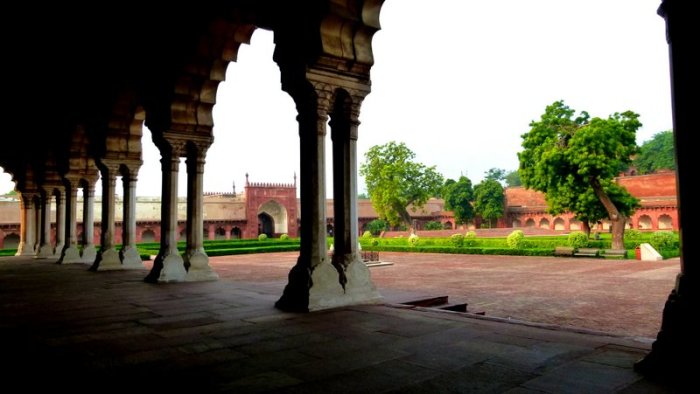 It is 8.30 am when I walk out of the Diwan-e-Aam, the last building to see in the guided walk. I sit down on the steps just to have one last look and also think about the many thoughts that are popping in my head.

I share some of these thoughts with my guide, Mohammad, who says that we can only guess and conjecture, but will never really know for real.

Mohammad has been a very good find and is everything that I look for in a guide — articulate, passionate about history, and able to separate legend and historical facts, and not shy to share his own opinion. I even earned a gentle reprimand from him for inadvertently touching the ‘painted tiles’ at the entrance ! One thing that really amused me about Mohammad was the way he spoke about the various Mughal emperors. If Akbar was mentioned with a lot of respect and reverence, Jahangir got a neutral, matter-of-fact mention. Shah Jahan was spoken about with a mix of exasperation and pity. As for Aurangzeb, Mohammad’s voice was carefully schooled to be neutral, but his flared nostrils and clipped voice gave away his deep loathing for him. 😀

As I make my way towards the exit, I see other tourists beginning to trickle in. By the time I exit they are arriving in busloads and carloads and I’m glad to be leaving. At that point, I can’t help thinking how different this second trip to the Agra Fort has turned out to be. I am really glad that this second chance to visit it came around and that I was able to visit it in the leisurely and quiet way that I prefer and like.

Mission, or rather visit, accomplished. 🙂

Read more about other places to visit in Agra:

23 thoughts on “Qila-i-Akbari: The red fort of Agra”