Last Thursday, as I left home for work, I reminded Amma that I would not be home for dinner as it was a Restaurant Review evening.

“I remember,” Amma said. “Which restaurant are you going to this evening?”

“And what kind of food will you be having there?”

“Really? I thought you don’t like to eat Indian food in restaurants !”

Amma’s statement is not exactly right. It would be more correct to say that I prefer to eat Indian food at home, and try other cuisines when I eat out. It doesn’t always work though, especially when I’m eating out with colleagues or friends and the cuisine is decided by consensus. In the case of Masala Table, the invitation to review the restaurant decided the cuisine. 🙂 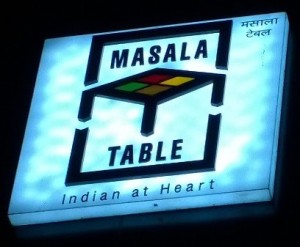 Masala Table is one of the three restaurants of Global Culture, which opened in Navi Mumbai a few months back. [I had visited their 80 Days restaurant in March and had liked it very much.] Besides the 3 restaurants, it also has a bar.

Masala Table offers Indian cuisine through an a-la-carte menu and a buffet as well. The Global Culture website, which claimed to treat food as an art form, had this to say of Masala Table: “Rediscover the good old Indian aromas, Peshawari, Awadhi, Kashmiri, Hyderabadi…”

Masala Table is on the first floor and when I entered it, I couldn’t help but be impressed at the feeling of spaciousness the room radiated.There were different types of seating arrangement to suit all group sizes and I saw later on that evening, that though the restaurant got full, it never felt full. The decor was what one could call contemporary Indian with red, orange and green colours dominating. The walls had phulkari work framed and displayed on them, and the buffet spread too was laid out on a phulkari embroidered cloth. Meanwhile, the tables had spices placed in the recessed spaces as centerpieces. 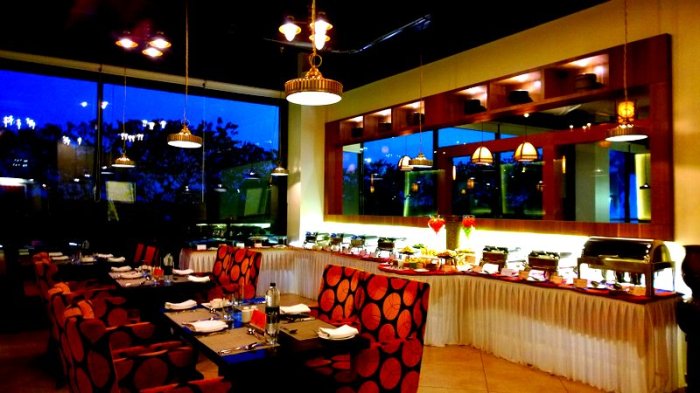 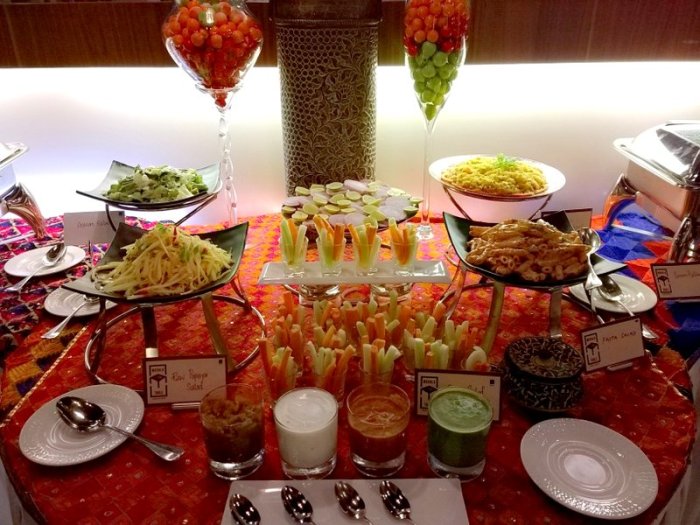 There were three other reviewers besides me and all of us got the menu in this little pouch as a nice and personal touch.

While we perused the menu, a glass of delicious and refreshing Shikanji was served to us, the best that I have ever had. After some discussion I opted to have the buffet and this is what I had.

Shikanji. Minty fresh and cool. I had 3 glasses of this nectar. 🙂

Singhade aur Pudine ka shorba: I have only one word to describe it. Awful. It was bitter and sour and had no mint that I could taste

Starters (Clockwise from top left in the photograph below). Paneer Zaituni or Paneer stuffed with olives: I’m not too fond of olives and the paneer & olive combination didn’t work for me; Dahiwale kabab: Delicious, with the raisins providing a surprise dash of sweetness; Shakarkand ke kabab: simple and bland with just minimal seasoning, I liked this very much; Hariyali kabab: Peanuts added the crunch and I found myself reaching for another more; Chatpate Aloo: One can rarely go wrong with potatoes and this was no exception – this was the best of the starters; Chukander or beetroot ke kabab: These beetroot, paneer and cheese kababs would have been nice, if it didn’t have cardamom added to it. And I hate cardamom in any form.

Salads: The salad section had two very un-Indian items on offer — Ceasar salad and a Pasta salad. Maybe this was an Indianised version of both or maybe it was the restaurant’s concession to its patrons who wanted something like this. I didn’t have these two salads and instead opted for the raw papaya salad and the aloo chaat, both of which were strictly okay. What I loved from this section was a papaya preserve. Unfortunately, I don’t have any pictures to share with you here.

Main Course (Clockwise from top left in the photograph below): Sabz Pancharatni: Nice, but nothing spectacular; Veg Keema Kaleji: Made from mushrooms and soya nuggets, both of which I like. However, with a name like this, I couldn’t bring myself to even taste this dish. I fail to understand what purpose does a vegetarian dish with a ‘meaty’ name serve; Kathal ki Biryani: Delicately spiced and flavoured, I loved it. This was the first time I was having kathal or jackfruit in its raw form and that too in a biryani; Arhar Dal: I love arhar dal and would have definitely had it, but that layer of oil floating on top was a big put off; Aloo chutney narialwale: Nice and different; Paneer Kali Mirch: the mandatory paneer dish in a creamy gravy and flavoured with black pepper. Once again nice, but not spectacular.

Dessert: There was a fairly large selection of dessert items from beetroot halwa and shahi tukda (both of which I gave a miss as they had cardamom in it) to pineapple pastry to mango mousse. Instead, I opted to have a Caramel Cheesecake, which was quite perfect for me and just the way I like it – not too sweet.

The service at Masala Table was fast and efficient and sometimes a little too efficient. We had to request for the service to slow down so that we could savour and enjoy our food.

I felt that for a buffet, the spread was just right, though the starters could have been reduced by a couple. After all the starters I had, I barely had enough space left to have the mains and the dessert. While there were the traditional restaurant comfort dishes like paneer, there were also unusual items like beetroot and kathal on the menu. I quite appreciated the mix of dishes on the menu.

Overall, my impressions of Masala Table was good, but it is not a place I would go with my friends. It is a place to go with family, visiting international friends, and also colleagues. In fact, when I went in to work on Friday morning, my department team grilled me on the place and there are plans afoot to go there for lunch one of these days. 🙂

Disclaimer: The meal at Masala Table was complimentary and was part of the #NaviMumbaiFoodies trail. However, this has not influenced my review of the restaurant and its food.

Appa, I can’t believe that it’s 10 years since you passed away. Long enough to get used to your absence, but not long enough to miss you and your gentle and non-judgmental counsel.
#MuseumTreasures 9
“Subtle is the path of dharma; we do not know it’s direction” ~ Yudhishthira (p.463, Mahabharata, Vol. 1 / Adi Parva)
#MuseumTreasures 8