Samarqand is one of the oldest cities in Central Asia, and is spread over three sites — the ancient settlement known as Afrosiab; the Timurid portion; and the modern part of the city. A UNESCO World Heritage Site since 2001, Samarqand is a contemporary of Rome and celebrated its 2750th birthday in 2007.

Located along the Great Silk Road at the crossroads of routes leading to Persia, India and China, Samarqand has drawn people from all over. It also attracted itinerant travelers like Marco Polo and Ibn Batuta, as well as purposeful conquerors like Alexander the Great and Shaybanid Khan alike. The former came out of curiosity; the latter to plunder or rule over its vast wealth. Samarqand drew me in as well, a modern-day traveler. If you have been following my Uzbekistan journey on this blog, then you will recall that it was a picture of a blue dome in Samarqand that had sparked off a desire to visit it.

I was in Samarqand for two days and got a glimpse of a fascinating past filled with myths, legends and historical events. I also saw many blue domes and many more works of art that were in different shades of blue. The amount of blue was enough to dub Samarqand as the blue city and use that title for this blog post as well ! 🙂 .

END_OF_DOCUMENT_TOKEN_TO_BE_REPLACED

I arrived in Shakhrisabz after a 4-hour, uneventful ride from Bukhara. It was the first day of a 3-day public holiday in Uzbekistan for Qurban Hayit (or Bakri Id as we know in India) and the town appeared to be quite deserted.

Though I knew that the monuments would be open and my guide waiting for me, it was still a little unnerving to see empty streets and closed shops as my car drove into the town shortly before noon. I was surprised to see so few tourists in Shakhrisabz, especially considering the fact that it, or rather its historic city centre, is a UNESCO World Heritage Site (inscribed in 2000). The harsh sun only accentuated the emptiness, as did a lack of green cover, which was ironical as I found out later that “Shakhrisabz” means Green City in English !

When I met Tursonay, my guide, one of the first questions I asked her was why there were so few people on Shakhrisabz here. Her answer was quite crisp and to the point: Shakhrisabz was not as grand or glamorous as Samarkand or Bukhara. But, she went on to add, the history of the region would have been very different if not for the most famous son of Shakhrisabz — Timur, Uzbekistan’s national hero. And for that reason alone, Shakhrisabz was important,

And over the next 2-3 hours that hot September afternoon in 2015, I got introduced to Amir Timur — as he is referred to in Uzbekistan — and got acquainted with his home town, Shakhrisabz.

END_OF_DOCUMENT_TOKEN_TO_BE_REPLACED

I fell in love in Bukhara. I wasn’t expecting to, but then love is always unexpected, isn’t it?

In fact, I wasn’t expecting anything from Bukhara when I visited Uzbekistan in September 2015. I was too busy dreaming about the Savitsky Museum at Nukus, the blue domes of Samarqand, and the minarets of Khiva. Bukhara was part of my itinerary, but it was more like a pit stop in the 700+ km road distance between Khiva and Samarkand — a place to rest and relax before moving on to the city that had inspired my Uzbekistan trip in the first place — Samarqand. Therefore, my online research for Bukhara only comprised a cursory reading of its history and finalising a B&B to stay.

I arrived in Bukhara after a 7-hour drive through the gorgeous Kyzyl Kum Desert from Khiva. The journey wasn’t particularly tiring as the roads were good for most of the distance, but after seven hours in the car, I just wanted to reach Bukhara. My first impressions of Bukhara were of a clean city with wide tree-lined avenues, multi-storied and traditional buildings existing side by side, and a very different vibe from the cities I had visited in Uzbekistan thus far.

The B&B I was staying in, Rustam & Zukhra, was a charming little place and though I was tempted to rest after the long journey, I thought it best to walk and stretch my legs a bit. Within minutes, I was at the historic Lyabi Hauz Complex and was transfixed by the sight before me. END_OF_DOCUMENT_TOKEN_TO_BE_REPLACED

About 20 km west of Nukus and past the town of Khojayli, on the way to the Uzbekistan-Turkmenistan border crossing, is Mizdahkan. An ancient and vast necropolis, Mizdahkan is spread over three low-lying hills, covering an area of approximately 2 sq.km.

Mizdahkan appears rather suddenly in an otherwise flat landscape. One moment you are driving past Soviet-style blocky constructions separated by vast stretches of emptiness. And the next moment there are thousands of graves, tombs and mausoleums stretching away from you and into the horizon. Even though I had seen online images of the Mizdahkan Necropolis before my visit, their appearance was still unexpected and a little unreal. I actually confirmed with the driver that we were indeed at Mizdahkan !

A low boundary wall separates the necropolis from the road, and like the seemingly unending graves it enclosed, this one too seemed to stretch on without a break. Just as I was wondering where the entrance to Mizdahkan was, a partly open blue door appeared on the wall. It was the entrance to the city of the dead, Mizdahkan.

Once inside the blue doors and after the initial look, the first thing that struck me was the different ages, styles and types of tombs — from unmarked graves to those with gravestones to plain tombs to elaborate ones to well-preserved ones to those falling apart… they were all there.

END_OF_DOCUMENT_TOKEN_TO_BE_REPLACED

Nukus was my first halt in Uzbekistan. The 6th largest city of the country, it is the capital of Karakalpakstan, an autonomous region within Uzbekistan. Karakalpakstan covers a third of the area of Uzbekistan, which includes a major portion of the Ustyurt Plateau, and the Kyzyl-Kum Desert. The Amu Darya river is the lifeline of the region and flows through the city of Nukus.

Nukus is not known for its tourist attractions, but there was a reason I visited this city. More about that at the end of the post. It is located about 1000 km northwest of Tashkent, or a two-and-a half-hour journey by air from there by a propeller-driven plane, like the one in the photograph below. 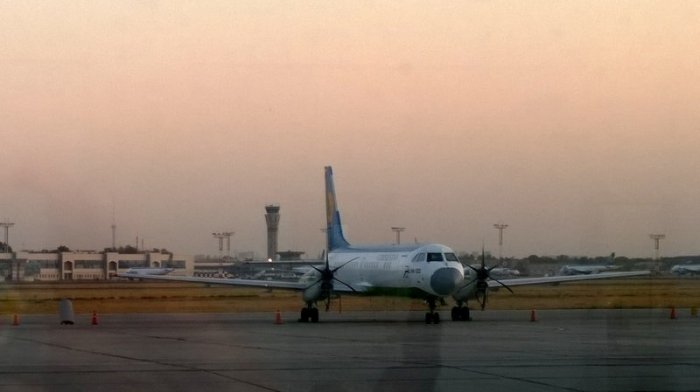 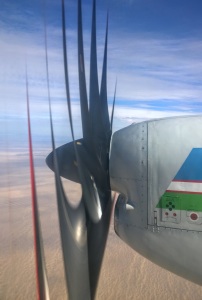 When I saw the propeller-driven planes waiting on the tarmac of the Tashkent Domestic Airport, I got all excited as I had never flown in one. But 5 minutes into flying, I was reaching for ear plugs for they were incredibly noisy. It didn’t help that my window overlooked one of the propellers.

Once the initial excitement of the propeller plane had worn off, the flight was uneventful and monotonous, just like the landscape on ground below. Apart from a road or two or a cluster of dwellings, I didn’t see anything to break the sandy ground below.

Nukus itself arrived rather suddenly and if I didn’t feel the plane descending, I wouldn’t have known that. It is only later that I found out that the city is quite spread out and away from the airport, and one of the reasons why I didn’t see anything from the air.

When I landed at the rather small and quaint Nukus Airport on that September morning, I had been travelling (or waiting for a connecting flight) for almost 20 hours, and sleep deprived for even longer. It had been a long journey from humid Mumbai, to hot Delhi to cold Tashkent to dry and arid Nukus. I should have been sleepy and tired, but thanks to the numerous cups of coffee and excitement at finally being in Uzbekistan, I was not only awake, but also alert and ready to explore. 🙂