I arrived in Shakhrisabz after a 4-hour, uneventful ride from Bukhara. It was the first day of a 3-day public holiday in Uzbekistan for Qurban Hayit (or Bakri Id as we know in India) and the town appeared to be quite deserted.

Though I knew that the monuments would be open and my guide waiting for me, it was still a little unnerving to see empty streets and closed shops as my car drove into the town shortly before noon. I was surprised to see so few tourists in Shakhrisabz, especially considering the fact that it, or rather its historic city centre, is a UNESCO World Heritage Site (inscribed in 2000). The harsh sun only accentuated the emptiness, as did a lack of green cover, which was ironical as I found out later that “Shakhrisabz” means Green City in English !

When I met Tursonay, my guide, one of the first questions I asked her was why there were so few people on Shakhrisabz here. Her answer was quite crisp and to the point: Shakhrisabz was not as grand or glamorous as Samarkand or Bukhara. But, she went on to add, the history of the region would have been very different if not for the most famous son of Shakhrisabz — Timur, Uzbekistan’s national hero. And for that reason alone, Shakhrisabz was important,

And over the next 2-3 hours that hot September afternoon in 2015, I got introduced to Amir Timur — as he is referred to in Uzbekistan — and got acquainted with his home town, Shakhrisabz.

Shakhrisabz was known as Kesh in ancient times and with remains of a settlement dating back to 2,700 years old having been found in the area, this is also one of Central Asia’s oldest cities. It has been part of the Achemenid Empire (6th to 4th centuries BCE), and Sogdian Empire in the (6th-7th century CE) before being conquered by the Arabs in 710.

It had always been an important town, a pit stop, on the trade route through the region, and would have continued to remain as one if not for the birth of its most famous son, Amir Timur, in 1336. Though Timur traveled far for his military conquests and made Samarqand the capital of his empire, his home town was not forgotten. He fortified the town, developed it, renamed it and built a magnificent palace, the Ak Sarai there. After his death, Shakhrisabz never rose to prominence again and was sacked by the emir of Bukhara in the 1700s. With the coming of the Russians, it fell further into neglect.

It is only with the independence of Uzbekistan in 1991 and the declaration of Amir Timur as the country’s national hero did attention fall on Shakhrisabz and its much neglected Timurid monuments — the Ak Sarai Palace, Kok Gumbad, Dor-ut Tilovat Complex, Dor-us Siyodut, and Timur’s crypt. Therein began some rather aggressive and over zealous renovation, and except for the Ak Sarai none of the other monuments have been spared. The process is still on and scaffolding can be seen everywhere in the monuments.

Presenting the monuments of Shakhrisabz. Clicking on any of the photographs in each set will enlarge it. You can then use the left or right arrow keys to navigate the photographs and their accompanying captions. 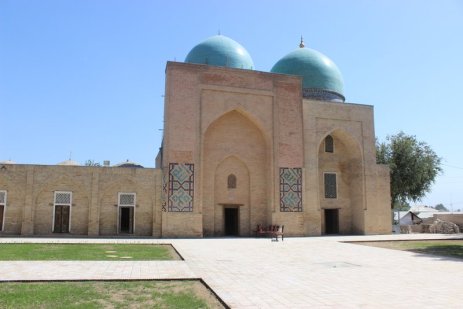 The inside of the freshly renovated and newly painted dome of the Dor-ut Tilovat. This structure was originally built by Ulugh Beg in 1437

More of the newly painted murals inside the Dor-ut Tilovat

The mulberry tree in this picture is rumored to be more than 800 years old, which means that it was around when Timur was still a boy. It definitely looks like an old tree, but whether 800 or more or less, I cannot tell ! 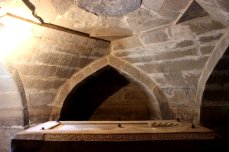 The underground chamber with the grave where Timur wanted to be buried. 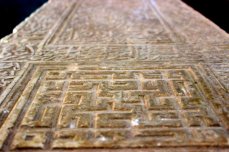 This looks like a geometrical design, but it is in fact a work of calligraphy in the kufic style. 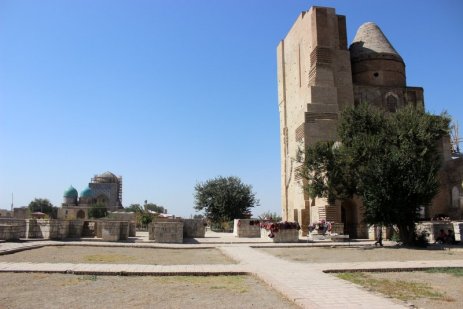 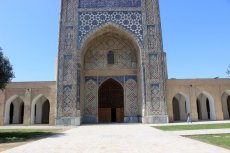 The Kok Gumbaz or the blue domed mosque

The remains of the grand Ak-Serai built by Timur in 1370. The entrance archway was reportedly almost 70m in height

Another view of the remains of the Ak Serai. 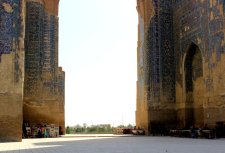 One thing that I found very impressive at the monuments in Shakhrisabz was the external tile work. The patterns, the colours, the designs and the calligraphy were simply breathtaking. That most of it was in ruins only underscored how brilliant they would have looked like when intact !

Presenting details from the tiles at the monuments of Shakhrisabz. Clicking on any of the photographs in each set will enlarge it. You can then use the left or right arrow keys to navigate through the photographs. 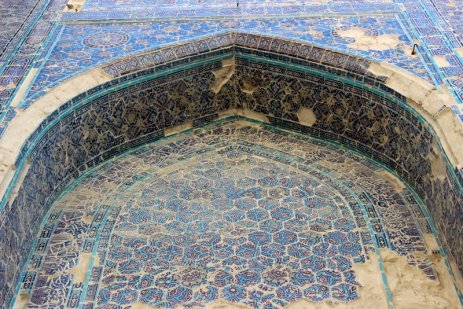 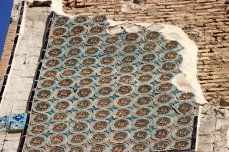 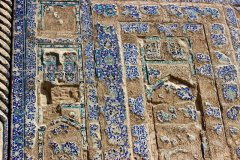 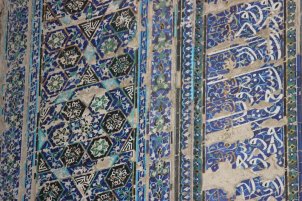 This tiled portion on the walls of the Ak Sarai spell out the words Allah, Muhammad and Ali 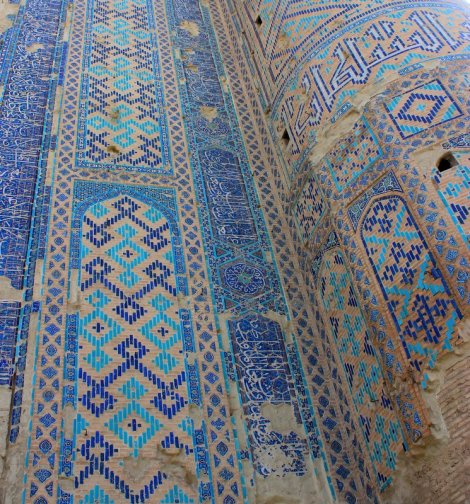 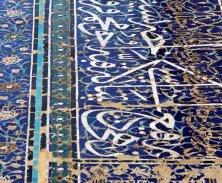 All through the guided tour, Tursonay kept narrating snippets from Timur’s life — his keen military sense, his love for the arts and science, his habit of “collecting” intellectuals, thinkers, philosophers from all over, his appreciation of culture, and so on. It was difficult to reconcile the image I had of him from my school books and books written by Western authors as a ruthless and merciless conqueror, a barbarian, etc.

Shakhrisabz may not have had the charms of the other places I visited in Uzbekistan, but it surely gave me a lot to think about in the way history is taught, viewed and perceived, particularly with reference to Amir Timur and the Timurid dynasty.

After a late and delicious lunch of bread, salad and coca-cola (!), it was time to leave for Samarqand, where the story of Timur and his dynasty would continue.

The road to Samarqand was an ancient trade route that cut through the Zarafshan mountains and is  a well maintained highway today. What would have taken the caravan a week or more to cover the 90-odd kilometres, took me just two hours and to another beautiful part of Uzbekistan.

My Dream Trip Uzbekistan Series:
Dear Uzbekistan | A city called Nukus | Art in the Desert: The Savitsky Collection at Nukus | Mizdahkan: A city for the dead | 3 forts & a dakhma | Itchan Kala of Khiva | There’s something about Bukhara! | Monumental Bukhara | The Jewish Heritage of Bukhara | Shakhrisabz: The home town of Amir Timur | The Registan Square of Samarqand | The blue city of Samarqand | The silk paper factory at Konigil | The surprise & delight that was Tashkent | Uzbekistan: The food & markets special | The Uzbekistan trip planner |

23 thoughts on “Shakhrisabz: The home town of Amir Timur”