A city built entirely out red sandstone and protected by a 11 km wall on 3 sides and a lake on the fourth.

A planned city, perhaps the region’s first, by an Emperor to honour a Sufi saint.

A city whose royal quarters housed the Emperor, his 3 queens, his harem, his favourite minister, and included a mosque, a temple and a giant game board, among many other structures.

A city that was abandoned 14 years after construction began.

A city that is a ghost city today.

A city that was named Fatehabad, but is known today as Fatehpur Sikri.

It is the year 1568. In Agra, Akbar, the third Mughal Emperor, is a worried man. None of the sons born to him so far have survived and he is desperate for an heir. On the advice of his trusted aides, he decides to seek the blessings of Salim Chishti, a Sufi saint, who lives in the village of Sikri about 40 km from Agra. Salim Chishti not only blesses Akbar with a son and heir, but also with additional sons. Happy and reassured, Akbar returns to Agra and shortly after the visit, gets the news that one of his queens is expecting a child. 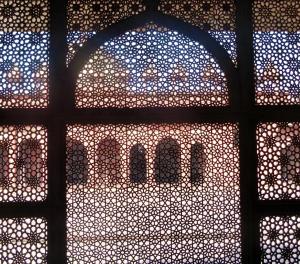 The elated Emperor builds a magnificent house for his pregnant queen near the saint’s dwelling in Sikri. A few months later, in 1569, a son (and heir) is born to Akbar. That child is named Salim, after the Sufi saint, and he grows up to be known as Jehangir. A year later, another son is born to an ecstatic Akbar.

Considering the Sufi saint to be a good omen, Akbar decides to shift his capital from Agra to Sikri, and commences with building a grand new capital city for his empire. He personally supervises the building of the new palaces, baths, pavilions, gardens, animal stables, and other structures necessary for a royal capital. 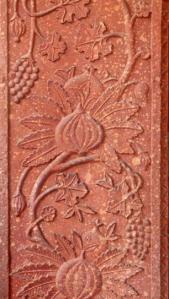 All the buildings in the royal or Imperial Complex are built of locally sourced red sandstone. Each building has its own special features or embellishments distinguishing it from the others. Emperor Akbar’s personal interest in the buildings resulted in these structures reflecting his view of an integrated faith. So while one building has carvings of grapevines and pomegranates as a metaphor for heaven (according to Islam), another building has panels of tiny kalashes (a Hindu symbol) carved on it. Yet another building has different varieties of jhumkas carved on its walls as ornamentation. The treasury building has carvings of sea serpents (representing guardians of wealth according to Chinese folklore) emerging from the mouth of elephants (a symbol of strength according to Hinduism).

But the grandest and the largest structure Akbar built in Fatehabad is the Jami Masjid, one of the first constructions there. Completed in 1571, the Masjid has a massive courtyard surrounded on 3 sides by spacious cloisters and on the 4th side by a prayer hall. The tomb of Salim Chishti is located within the courtyard of the Jami Masjid. A white marble structure, the tomb contrasts beautifully with the red of the Jami Masjid, and has some of the most delicate and finest stone screens I have seen (see the 2nd photograph in this post). An interesting and recurring feature in the Masjid is the presence of chhatris, a Hindu architectural feature, all along the roof of the Masjid. The Masjid interiors are no less stunning with wall paintings, frescoes and inlay work in marble and glazed tiles on the walls.

The Jami Masjid can be accessed through two entrances — the Badshah Darwaza and the Buland Darwaza. The former gate gives access to the mosque from the Imperial complex and it is through this gate that Emperor Akbar would visit the Jami Masjid to offer prayers. The Buland Darwaza was built about 5 years after the construction of the Jami Masjid. It was built to commemorate the conquest of Gujarat in 1572, and it was also when Sikri’s name was changed to Fatehabad. Standing at 136 ft, the Buland Darwaza is the tallest structure of its kind in India, and among the tallest in the world. Its discreet decorative elements like marble inlay work and carvings does not distract from the semi-octagonal design of the entrance or its imposing façade.

Fatehabad was the hub of the Mughal Empire when it was occupied. And for Emperor Akbar, it was a place to showcase his ideals, his views and his vision for the Empire. But not for long. Trouble was brewing in the Northwestern parts, and severe water scarcity in Fatehabad added to his troubles. So by 1585, Akbar shifted his capital to Lahore with an eye to quell trouble from the Northwest. Though the seat of the Mughal Empire shifted back to Agra in 1598, Akbar never returned to Fatehabad again. Neither did his descendents, except perhaps to offer prayers at the dargah of Salim Chishti.

Fatehabad was never the capital of the Mughal empire again. Over the decades, Fatehabad changed to become Fatehpur Sikri. The Imperial Complex and other buildings associated with it were abandoned and never occupied again. After suffering years of neglect and ruin, the Imperial Complex was taken over by the Archaeological Society of India, and in 1986, was declared as a UNESCO World Heritage Site. Today, the Imperial Complex is a ghost town, open only for tourists from sunrise to sunset. And Sikri is a typical, dusty Indian village, albeit a tourist-savvy one.

I was in Fatehpur Sikri last month. It was just 7 am when I arrived there with guide in tow. Though I had read up on this abandoned city, it didn’t prepare me for the sheer lyrical atmosphere of the place. The red sandstone, clear blue skies and the greenery around was sheer poetry. Sandstone is my favourite stone (you can read more about my love for sandstone here and here) and just the sight of an entire historical city built out of this was a catalyst for me to travel back in time. And time travel in Fatehpur Sikri did not disappoint. The grand architecture, the sweeping vistas, the gardens, the exquisite and delicate jaali work in sandstone, the layout of the Imperial Complex, the attention to detail to make each space unique, the Jami Masjid, the colours inside… where do I even begin and for that matter where do I end?

I imagined music and dance and life from a bygone era.

I imagined the whole place bathed in a silvery moonlight and Tansen singing Raag Marwa.

I imagined visitors to the Imperial Complex stunned and awed by its design and layout.

I imagined the jhumka designs being copied and made by the jewellers for the royal women.

I imagined Akbar giving audience to his subjects and dispensing justice and judgements from the Diwan-e-Aam, and discussing religion and campaigns with his aides at the Diwan-e-Khas.

I imagined a place abandoned abruptly and without a backward glance and wept silent tears for it.

I imagined all this as the sun ascended the skies in Fatehpur Sikri, and as the sandstone changed its colour from a delicate pinkish red to a deep red, and the light blue sky changed into a deep, almost turquoise, blue.

I imagined all this while wandering about the abandoned structures of Fatehpur Sikri. So vivid are these imaginations that even after a month since my visit there, it is still part of the poetry of my imagination.

A poetry of red sandstone and blue skies in Fatehpur Sikri. 🙂

Read more other places to visit in Agra: