It all began with a Twitter DM (or direct message) I received from my friend and fellow blogger, Anuradha Shankar.

It was the summer of 2014 and Anu was travelling, or doing a temple run as she preferred to call it, in the Tirunelveli district of Tamil Nadu. She would send me an occasional update about the temples she was visiting — delight over seeing exquisite murals in one or despair on coming across bathroom tiles in another.

When I received a DM from her that May evening, with a “See this !”, I wondered what was it she had sent me this time and whether it would be a rave or rant ! As it happened, it didn’t matter for the photograph that Anu had messaged me simply took my breath away.

I messaged back. Jain Art? In Tamil Nadu? Where? What? How? When? Anu replied, Yes. Yes. This is Kazhugumalai, 8th-9th century CE. Rest when I get back. I was stunned for till then I had no idea about the existence of Jain culture — past or present —in Tamil Nadu. I had wrongly assumed that Karnataka was the furthest South that Jainism had spread to.

We know of the history of Jainism in Tamil Nadu from the accounts of travellers, religious texts, and epigraphs and inscriptions. For example, while Hiuen Tsang speaks of Kanchipuram as a thriving centre for Jainism in the 7th century CE, the Mahavamsa, a Buddhist text from Sri Lanka, tells us that Jainism arrived in Tamil Nadu around the 4th century BCE.

Jainism grew in strength in the early centuries of the 1st millennium as is evident from the large numbers of both rock-cut and structural temples in Tamil Nadu, and the epigraphs and inscriptions found there. Both show patronage by rulers — particularly Pandian and Chola — and support from the local population, especially the rich merchant class. Based on these very inscriptions, historians estimate that the Jain population of Tamil Nadu was at its peak in the 8th and 9th centuries with the maximum number of Jains concentrated in Kanchipuram, Madurai, Pudukkottai, Tiruchirapalli, and Tirunelveli.

The rise of Shaivism and Vaishnavism in Tamil Nadu meant that Jainism came into direct and often violent conflict with them. Two of the greatest Shaivaite saints, Appar and Gnanasambandar, and also Vaishnavite Alvars of that time, are said to have actively organised efforts to stamp out Jainism. According to a Saivite legend, 8,000 Jains were impaled at Madurai in a brutal act of mass killing in the 8th century CE. [The Meenakshi Amman Temple at Madurai is supposed to have a mural that depicts this heinous act. I didn’t see it though.]

With the rise in the persecution of Jains and loss of patronage, some Jains migrated to neighbouring Karnataka, while some others, especially the richer Jains, got assimilated into the dominant Shaiva and Vaishnava communities in Tamil Nadu. The poorer Jains didn’t really count and were ignored; and as the numbers of the community dwindled they became inconspicuous. By 12th century CE, Jainism had gone into oblivion in Tamil Nadu and most of their places of worship abandoned or forgotten, or claimed by others.

The vast remains of deserted Jain caves, eroding rock cut figures and few temples still in use in Tamil Nadu give a glimpse of a thriving Jain culture in a bygone era. I was lucky to visit a few of the sites in Madurai and Kanchipuram earlier this year and see for myself their significance in understanding the region and culture.

The hills around Madurai, especially Pasumalai and Anaimalai, were used by Jain monks or munis for residing and meditating. Natural caverns formed in these hills due to weathering and erosion were the perfect spots for these munis to use as shelter. As patronage of Jainism grew, so did the commissioning of Jain art on these very hills. I saw one such set of stunning relief sculptures on a rock face at Anaimalai and was absolutely thrilled to find that I could identify a few of them (paying attention in my Indian Aesthetics class really helped !).

According to the Grantham inscriptions found at the base of these sculptural reliefs, they were carved due to the efforts of a Jain monk called Ajjanandi in the 9th and 10th centuries CE. These sculptures were once brightly painted of which only traces remain today, but are enough to give an indication of just how beautiful they would have been in their original form. 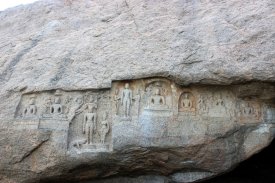 The row of Jain sculptural reliefs at Anaimalai

Parshvanath, the 23rd Jain Tirthankar, with his attendant Yaksha Dharanendra behind him and Yakshini Padmavati holding an umbrella to the right. A devotee prostrates himself before the tirthankar

Yakshini Ambika. The lion to her right helped me identify her. 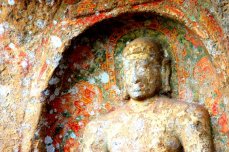 I couldn’t identify this Tirthankar, probably because I couldn’t look past the colours ! Saffron, red, green and gold. Isn’t this stunning?

Parshvanath again. Notice the snake hooded Yaksha Dharanendra and Yakshini Padmavati on either side.

Another view and perspective of the Jain relief sculptures at Anaimalai

While in Madurai, I also visited two other rock-cut sites, which are supposed to have originally been Jain sites, but are now Murugan temples. The first site was at Thirupuramkundram, about 10 km from Madurai. Unfortunately, our group reached the site after closing hours and we could only see the relief sculptures on the outside and that too from a distance. Except for one sculpture, which looked like that of a Jain tirthankar, the others could not be identified clearly enough to give an indication as to whether these caves were Jain or Hindu !

The other site I visited was the Ladan Temple, also carved out of Anaimalai, at Narsingapuram, near Madurai. The ASI board at the entrance to this site identifies it as an 8th century CE Pandian-era structure and a Murugan temple. The board mentions a renovation of the temple in the 9th century, based on an inscription found there; but doesn’t talk about what existed there before.

The sanctum sanctorum of the ‘temple’ has a raised platform, which could have served as a bed for a Jain muni residing there. I could be completely off the mark here, but the sculptures, which seem to have been made of a different rock, could have been added at a later stage. This is not unusual, for occupying places of worship of other faiths and ‘converting’ them was quite the norm of that period and not an exception.

Thirupuramkundram: The light of the setting sun falls on these rock cut relief sculptures. Except for the sculpture on the extreme right (detail in the next picture), I could not guess who or what the other sculptures were all about.

Thirupuramkundram: The samabhanga pose, the nude figure, the clean shaven head and the extended earlobes indicated that this was a Jain Tirthankara. But the animal relief confused things a bit. The hind portion is like that of a dog and the head is like that of a goat. So who is it? Bhairava (because of the dog) or a Tirthankar?

Thirupuramkundram: This set of sculptures is near the entrance to the cave temple. While Ganesha is clearly identifiable, the other two remain a mystery to me. Saints, monks, patrons, sages?

Ladan Temple: The facade of the Murugan temple. The sculpture at the base is an ash smeared Kubera. Do note the dark coloured stone figurines standing out against a different coloured base rock inside the temple.

Ladan Temple: A relief of a peacock, the vahana of the resident deity, Murugan on the wall. Note the difference in colour of the background stone and the sculpture

Kanchipuram was a different experience for I visited two structural Jain temples there, temples which had been under worship and had received some form of patronage all through their 1000+ years of existence. The two temples were the Trilokyanathswami Temple and the Chandraprabha Temple at Tiruparuttikundram.

In the past, the Jain community or Nirgranthas as they were known in Tamil Nadu usually lived on the outskirts of the city. Kanchipuram was no different and the area the Nirgranthas lived in was known as Jinna Kanchi or Jain Kanchi. Today, this area is a suburb of Kanchipururam.

Both the Jain temples are built next to each other with only a compound wall separating the two. The Trilokyanathswami Temple is the larger of the two and the only one I was able to visit. I arrived when the priest was locking up the temple and though he refused to open the sanctum for me, he was gracious enough to wait as I explored the rest of the temple. The Chandraprabha Temple, which is the older of the two temples having been built in the 8th century CE, was locked and its caretaker was nowhere to be found.

According to inscriptions found at the Trilokyanathswami Temple, it was built by the Chola emperors Rajendra I (c.1014-44) and Kulottunga I (c.1070 -1120) in the 11th century CE.  The Vijayanagara emperors — Bukka II in 1387-88, and Krishnadeva Raya in 1518 — made additions to the temple. One of the additions made was the Sangeeta Mandapam, so named because of the musical quality of the pillars when struck. [I must clarify that I didn’t try it out and am only sharing what I have read elsewhere].

The pillars, walls and ceilings of the Sangeeta Mandapam are painted and they are some of the most remarkable murals I have ever come across. Once again, I was thrilled that I was able to understand — at least some part — what had been painted. These murals, which were painted between the 16th and 18th centuries, have been recently cleaned and restored by the Archaeological Society of India (ASI). Since I haven’t seen the original, I can’t comment on whether the ASI has done a good or a bad job. Some of the murals looked suspiciously bright and fresh, while some looked clean, but with muted colours. Have a look yourself.

Again, I’m not sure what this panel from Jain mythology depicts, but I think this is one of the Pancha Kalyanaka or auspicious events that marks the life of a tirthankar. 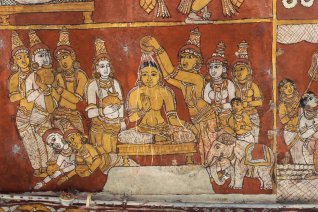 Indra giving the ceremonial bath to a tirthankar after his birth. This auspicious event is known as Janma Kalyanaka and is one of the Pancha Kalyanaka

Indra dances before the tirthankara to be after the ceremonial bath.

Multiple stories are depicted in this panel

Jainism in Tamil Nadu has come a long way, a full circle from arrival to spread, growth and then decline and oblivion to a resurgence now mainly through its built heritage. If newspaper reports are to be believed then the last 50 years has seen the interest in Jain heritage in Tamil Nadu grow — both among the Jain community as well as historians, researchers, academicians, historians, linguists, and the state government.

As more Jain sites are getting re-‘discovered’, more is the interest and curiosity being generated. Thanks to this, many large and small Jain temples are being reclaimed by the Jain community and getting restored and renovated. The years to come will, hopefully, be exciting ones.

For me, the trail is still fresh and there are numerous paths leading off to different parts of Tamil Nadu — Kazhugumalai, Pudukkottai, Thirumalai, etc.  Who thought a DM could set me off on a on a path I never expected me to be on and develop an interest in an area where I had none before !

Leave a Reply to The Untourists Cancel reply